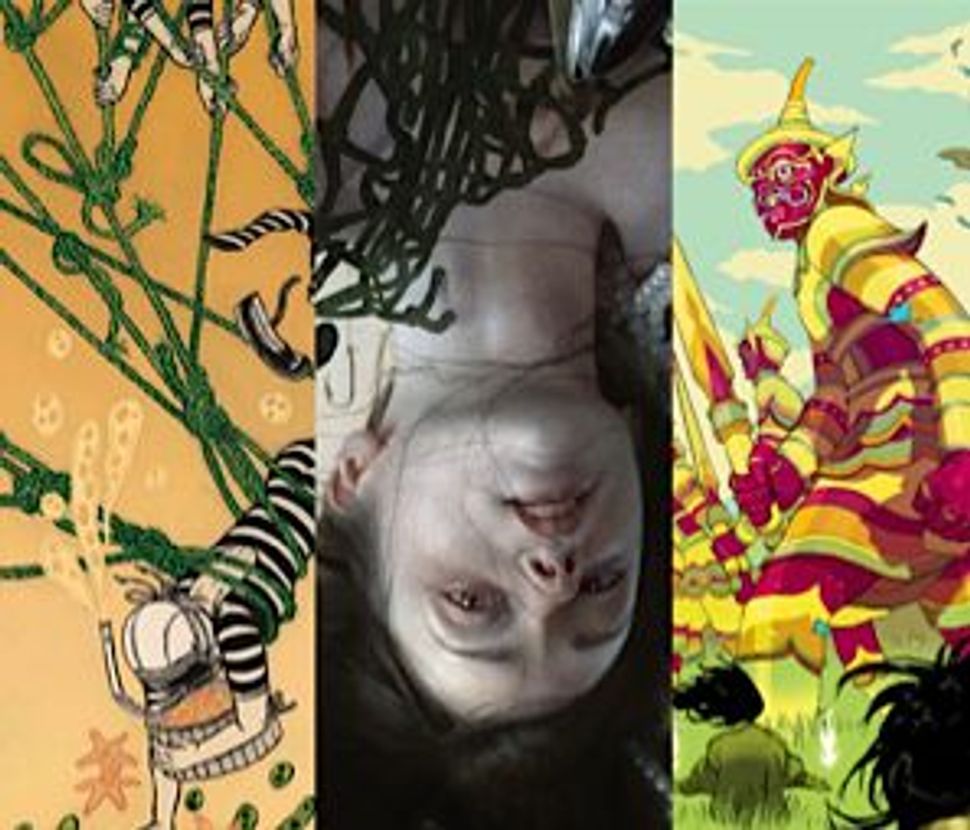 Images by Yuko Shimizu, Sam Weber and Tomer Hanuka at the Society of Illustrators.

Nevermind that all three artists attended the School of Visual Arts (where Shimizu and Hanuka are professors), make their home in New York City, and work for many of the same clients. Or that the Society has “blown up” several works from each artist to a single size and pinned them to the wall, deliberately eliding differences in scale and material.

Nevertheless, the show, on now until October 16, offers fruitful comparisons and highlights the theme the artists share: fantasy and childhood, shot through with subtle violence and menace.

Watch a slideshow of images from ‘Blow Up’:

Shimizu (who shares a name with the creator of Hello Kitty), produced a series of woodcuts for the exhibition all riffing on the idea of blowing up, such as a bubble and a storm blowing. There’s a tornado of arms and legs twirled up in a massive scarf; a man in aviator goggles held aloft with word bubbles patterned like cartoon mushrooms; a quartet of Pippi Longstocking-like figures lined up with their backs to us. All playful, but with a whisper of a threat. Colored with orangey brick-red and a deep lichen, the images have a faded, old-fashioned quality, although they were digitally colored on a MacBook Pro.

The flat color blocks of Japanese printmaking no doubt also inspired Hanuka, who grew up in Israel and attended the School of Visual Arts after completing his military service. Hanuka’s contribution includes samples from “The Divine,” a graphic novel written by Boaz Lavie that he is illustrating with his twin brother (and Forward contributor), Asaf. The panels depict a war torn countryside that recalls 1960’s Vietnam, done up in neon pinks and greens, and peopled with mythological creatures and children with guns. In one scene, a bullet rips slow-motion through a skull, scattering cartilage and teeth.

The simplicity of Weber’s pieces — a palette of grey, blue and black; figures stark against white backgrounds — make them that much more compelling, especially when set beside the busier styles of Shimizu and Hanuka.

Weber, who was born in Alaska and grew up in Canada, makes ethereal pictures that seem technologically altered, like computer printouts of paintings. Figures fuse with animals — there is a girl with lizard eyes, or the “Fisherman’s Wife,” trapped upside-down in a net, fish and shells and pearls snarled in her hair. The images are romantic and creepy and demand attention.

Curiously, the Society doesn’t identify the backgrounds of the artists until the second room of the exhibition, downstairs, where the curators have assembled the sketches, clippings and ephemera that form the basis of the artists’ work. It’s a disorienting strategy that makes a worthy argument: the process of illustration, while entirely unique, transcends birthplace and biography.