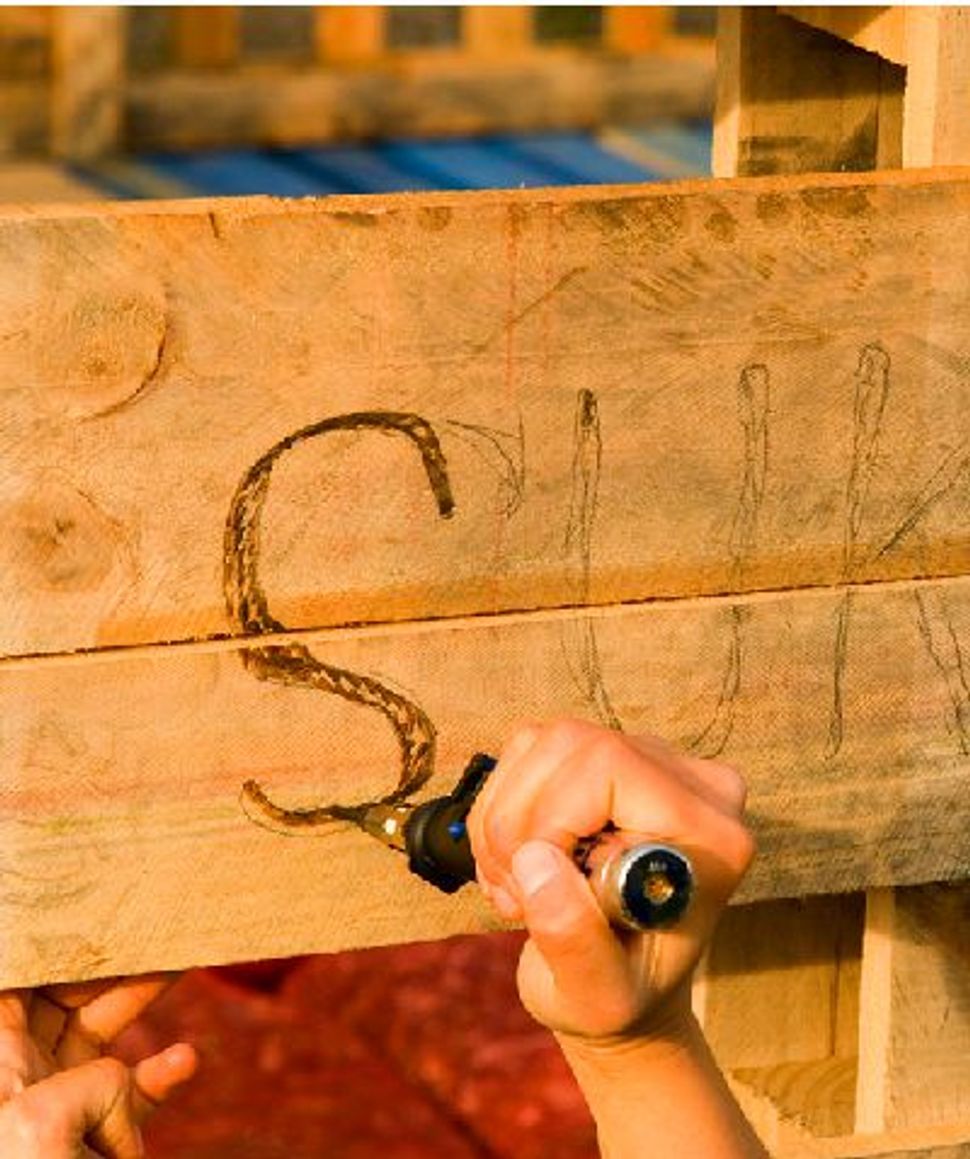 ?S? is for ?sukkah.? Image by David Kendall

When I arrived at the East London Sukkah this blustery Saturday, the afternoon’s schedule of programs was running behind to accommodate a late entry: “A Guide to Squatting” by the North East London Squatters Network.

It was an appropriate event for the festival of Sukkot, which asks us to recall our nomadic history and move our lives into transitory homes. It was even more appropriate for a sukkah built by a partnership led by Jewdas, an organization that bills itself as “radical voices for the alternative diaspora,” and whose website describes the traditional structure as “a home for 7 days, where you eat, sleep, party…”

“…and make love,” intoned Heather Ring wryly, finishing a quote that for some reason lingers in people’s minds when they read the website. Ring, landscape architect and founder of the Wayward Plant Registry, was project leader and one of three designers of the sukkah.

Jewdas also asks us to see a sukkah as a place, if not of anarchy, then certainly of joyful equality, “a temporary autonomous zone” of “radical hospitality,” built across faiths and cultures “where the lord of the manor becomes closer to the man who sleeps on the park bench.”

These are fitting ambitions for a sukkah housed on Spitalfields City Farm in Tower Hamlets, one of the poorest and most ethnically diverse boroughs in the country, located less than one mile from the City of London’s financial hub.

Built over the last three days by the diverse community that hosts it, the East London Sukkah has been visited and adorned by its Somalian, Sudanese and Bangladeshi neighbors. Children from the nearby East London Mosque, which serves the U.K.’s largest Muslim community, raised the roof on Friday: a canopy of laurel leaves strung on twine, which rustled with a living persistence as the winds picked up and the sun went down. The roof is only silent when a train clatters past on the railway tracks ten feet away.

During a session on the theme of food and ethics, the mosque students drew pictures of their favorite food — mostly fish and chips (the British stand united under this greasy patriotic umbrella) — and where it comes from: fish and chip shops and cars, illustrating the disconnect between consumer and producer, and the need for more conversations that address it.

Later, the director of the mosque gave a talk to the students in the sukkah about Jewish culture, said Abbas Nokhasteh, of openvizor, an international arts and communications organization, and the sukkah’s co-producer and lead funding partner. “Oh, it’s just like us!” they said, of the Semitic similarities.
Born in Iran and Muslim by birth, Nokhasteh explained that for him it’s important to learn from Jews and the Jewish community. “There are so many issues and politics involved in separating people — but the reality is that we live together, we have to come together.”

The sukkah will continue to stand until September 29 and there are more events planned: an evening on the theme of faith, migration and urbanism, and a food and film night. While the structure will soon come down, a photographer and videographer have been on hand all week, capturing construction and debate. They hope to make a documentary about the project, explained Nokhasteh, “just to believe that it actually happened.”