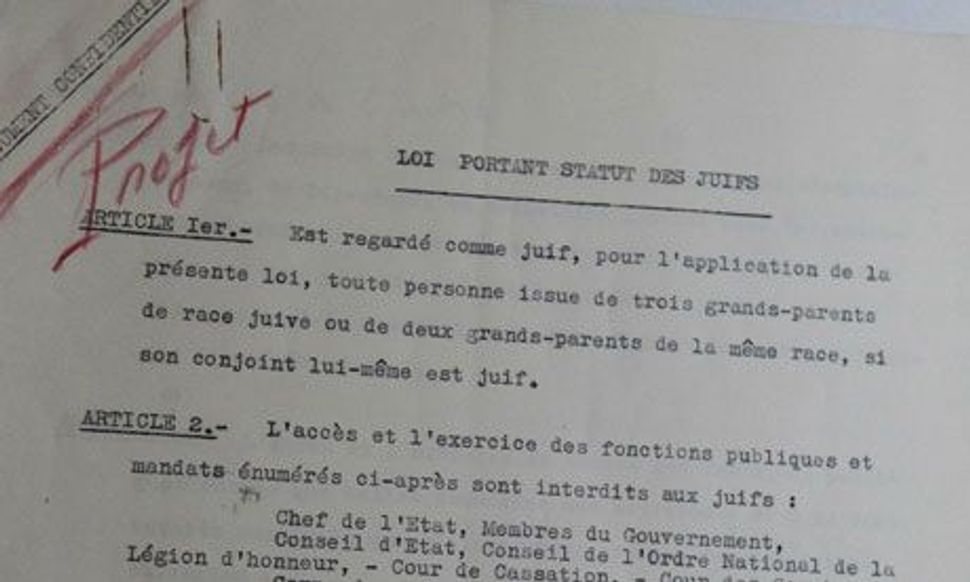 Little had been known about French collaborationist leader Philippe Pétain’s influence on anti-Semitic policies in Vichy France, where he governed from 1940 to 1944.

But according to The Guardian, a draft of a memo, recently revealed to the Holocaust Memorial in Paris, shows Pétain went to great efforts to extend the brutal treatment of French Jews already imposed by the Nazis.

The statute on Jews, passed in October 1940 shortly after Nazi occupation, eliminated foreign Jewish investment in France and generally excluded them from society. At the time, the statute did not extend to French-born Jews, who were nominally protected as citizens.

The memo shows this proviso was crossed out and handwriting on the document, which experts claim belongs to Pétain, calls for an extension of the statute, prohibiting Jewish participation in public sector jobs.

“The statue on Jews was a statute that was adopted without pressure from the Germans, without the request of the Germans: an indigenous statute,” said Serge Klarsfeld, a French lawyer and Holocaust historian. “And now we have decisive evidence that it was desire of Marshal Pétain himself.”

The document all but debunks the long-standing argument that Pétain was a friend to French Jews, in spite of the fact Vichy helped deport nearly 80,000 Jews to concentration camps until 1944.

“When you see documents like this showing Pétain and his colleagues had already adopted a clear and harsh anti-Semitic outlook beforehand,” Klarsfeld told TIME, “it isn’t surprising that Vichy provided the police that were needed to round up and deport French Jews when the Nazis requested them.”