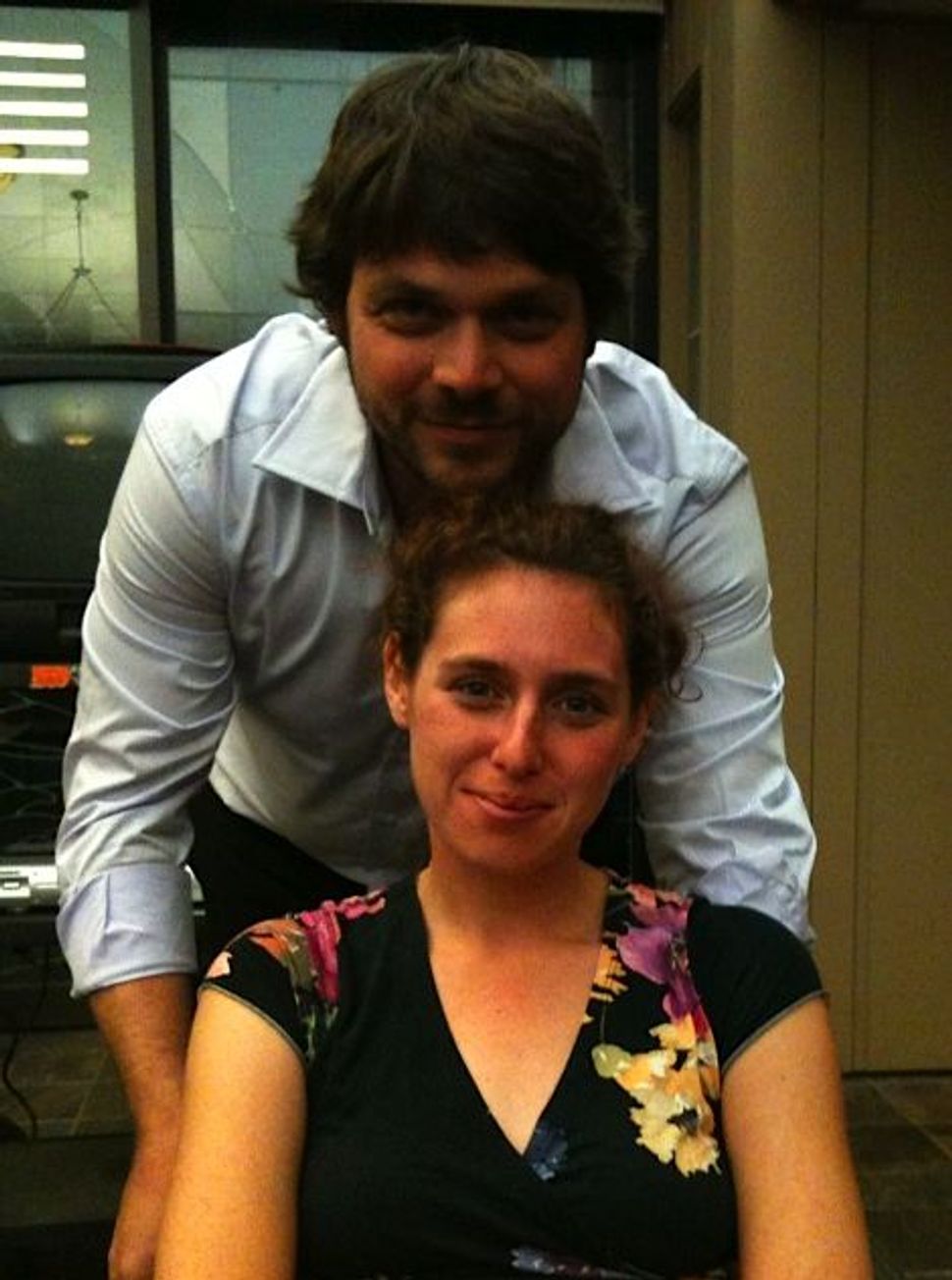 Ohad Knoller and Karmit Arbel at Congregation Beth Am. Image by Renee Ghert-Zand

“Srugim,” the hit Israeli TV show about the lives of five young Modern Orthodox Jews, took the American scene by a storm when The Jewish Channel began broadcasting it last February. Now in its second season in Israel, “Srugim’s” first season continues to be aired on TJC, while its latest episodes are being screened at the JCC in Manhattan once a week, starting tonight.

For those fans who wanted an up-close-and-personal encounter with the series, the opportunity came in August, when Israeli actor Ohad Knoller travelled to Boston, Detroit, San Francisco and New York. Knoller’s trip wasn’t just a celebrity publicity junket, however, but was also a Zionist outreach mission. Meeting with audiences in synagogues, community centers and Federations, Knoller shed his movie star persona and took on the role of emissary for the Zionist movement, as it is being embraced and interpreted by his generation.

In addition to his role as the Modern Orthodox cad Nati in “Srugim,” the 34-year old Knoller is recognized by fans in Israel and around the world for his work in films such as “Yossi” and “Jagger,” “Beaufort” and “The Bubble.” But far fewer people are aware of the work he’s done to bring culture to more remote parts of the country by establishing, together with his wife Noa Knoller, an experimental theater in the Negev desert town of Dimona.

“I consider myself a Zionist, and that means I have a responsibility to build the country,” said Knoller in an interview following a talk sponsored by the American Zionist Movement, which he gave together with Karmit Arbel of the Ayalim Association (an social entrepreneurial program for university students) at Congregation Beth Am in Los Altos Hills, CA.

Knoller’s entertainment industry colleagues, all of whom live in what he terms “the Tel Aviv bubble,” were skeptical of Knoller’s move to Dimona, a full two hours drive from the center of the country. “People in Tel Aviv have a limited idea about Israel. They enjoy lots of culture, security and infrastructure and don’t realize that there are huge challenges in other regions,” said Knoller.

So, when a year ago his wife was offered the position of creative director for the Dimona Culture Lab, it was Knoller who persuaded her that, rather than commuting from Tel Aviv, they needed to move to Dimona with their toddler son. He felt that if no one was willing to make a pioneering effort, then there would never be a chance to attract more professional artists to the Negev and develop the nascent talents and creative resources already there.

In his efforts to make “our culture Israel-oriented and not just Tel Aviv-oriented,” Knoller is also starting a film foundation to encourage producers and directors to scout out desert locations and consider Negev-centric scripts.

As a first step in trying to bring his fellow “Srugim” cast members over to his cause, Knoller convinced them to hold the premiere screening of the show’s second season at Dimona’s new Cinemateque, run by Arbel and other volunteers.

Knoller (who lists his political views as “Revisionist” on his Facebook page and is on the record for sharing right-of-center opinions), does not let any Israeli — including his left-wing and self-labeled “anti-Zionist” fellow artists — off the hook. “Even if you declare yourself to be non-Zionist, you are still part of the overall Zionist conversation simply by living in Israel,” he declared.

Watch the intro to the second season of ‘Srugim’: