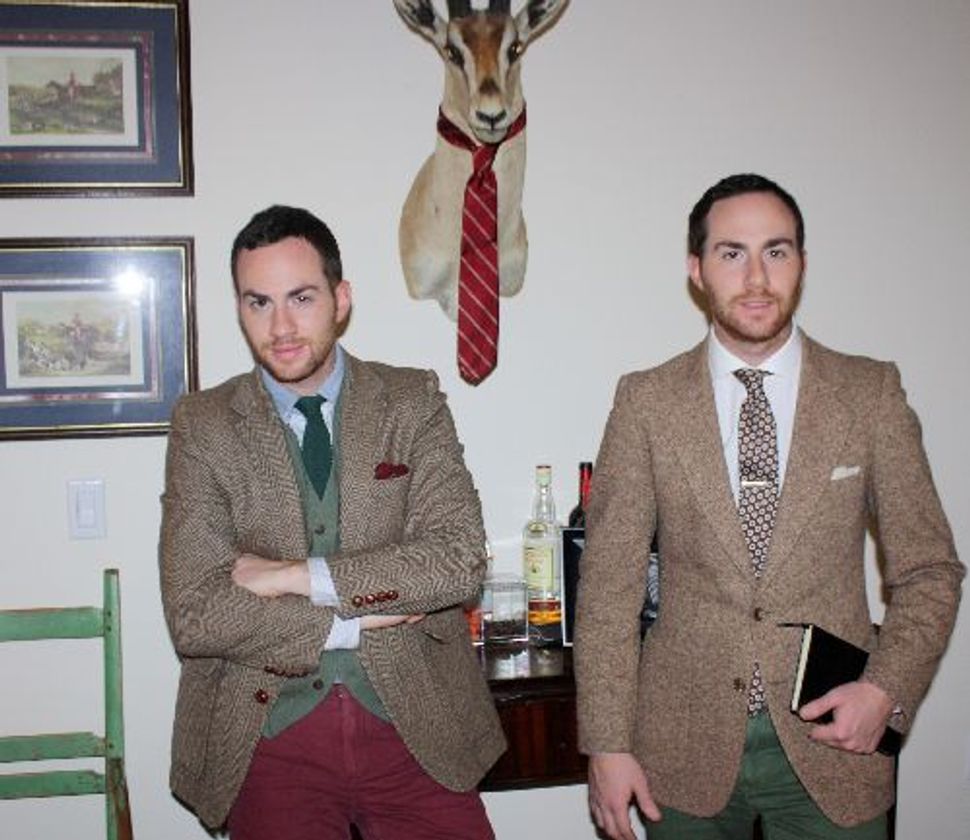 Twin peacocks leaning over an “O & S” monogram form the logo of newly launched men’s clothing line Ovadia & Sons. The birds also make apt stand-ins for Ariel and Shimon Ovadia, the 27-year-old, yeshiva-educated twins who founded the label in July. Riding a wave of fawning press from heavy-hitters like Esquire and GQ magazines, the clothes-loving sons of an Israeli-born childrenswear magnate have already sold out several runs of their handmade suits (priced between $1,695–$2,095) and shirts ($45–$345); they also offer ties ($110–$135) and footwear ($295–$450). Ariel Ovadia talked to the Forward from the Manhattan home office he shares with his brother.

You launched Ovadia and Sons this summer; your first full collection is due in spring of 2011. What was your path to launching the business?

Even as kids, we worked at our father’s childrenswear company, so we’ve been in the business as long as we can remember. When we started getting into clothing as teens, we couldn’t find anything we liked in stores, so we started thinking about doing it ourselves. But the real catalyst was a conversation with Ralph Lauren one rainy Sunday at his store in East Hampton. He gave us a push and inspiration.

What makes your suits different?

The suits aren’t trendy or boxy. They have a slimmer silhouette and more modern fit for a guy who’s in shape. They’re also handmade from start to finish. And we’re very particular about patterns and fabrics, some of which are woven especially for us. We design the cloth.

The retail business seems sluggish. Were you apprehensive about launching a business now?

People are always willing to pay for quality. A guy like me would rather have one quality suit in my closet than three cheap ones. People are starting to dress up more, too. It’s not going to take over the whole market, because it’s not accessible to everyone. But you’ll have a guy who didn’t used to wear a tie wearing one now.
What’s it like working with your twin?

I don’t really know anything else. We’ve been working together since we were kids. We have more or less the same taste. We design everything together; when it comes to sampling and production, he’ll deal with certain factories, I’ll deal with some buyers.

Esquire said Barneys and Bergdorf are the most likely candidates to stock your line. Has that happened? We got a few offers, but we’re still waiting for the right opportunity. In the meantime, an online store will launch in December. At the same time, we’ve had several production runs on shirtings and trousers that completely sold out through word of mouth and press alone. And we’re backed up six weeks for suits.

Did you have formal fashion training?

We had hands-on training. You can’t pay for the type of education we had. And we know what we like. We’ve travel in England and France to visit factories that are 100 years old. When we walk in, the suppliers appreciate that we know what we’re talking about.

We’re the customer, and our friends are the customer. But I also have customers who are 65-year-old lawyers who love the design and fabrics.

Tell us about your launch party, which got a lot of press.

We held it at our apartment in Chelsea, which is also our office. We have a bar and an antelope head on the wall. The party was sponsored by Maker’s Mark and Heineken. We had buyers, stylists, photographers. There was a cigar lounge with a Cuban cigar roller hand-rolling cigars.

What designers do you emulate?

We collected vintage Ralph Lauren pieces as teenagers. But I got real inspiration from Savile Row tailors like Huntsman, Henry Poole, Norton and Sons. My first time in London, I walked up and down the street for 2 ½ hours before I had the courage to go into a store. I overheard a sales guy tell a customer that suits started at 3,500 pounds. That was $5,000 at the time!

You and Shimon attended King’s Bay Yeshiva and Shaare Torah high school in Brooklyn. Does your background inform your designs?

It’s huge. Keep in mind I hated my school. I had to wear a uniform every day. We didn’t have liberty of expressing ourselves with clothing. Our uniform was a light blue shirt and grey pants; in high school, the pants were navy. We used to think, “If I could wear anything I wanted, what would it be?”

How would you redesign those uniforms now?

I’d probably do a subtle plaid shirt with dark pants in navy or black. It would be a little more fun.