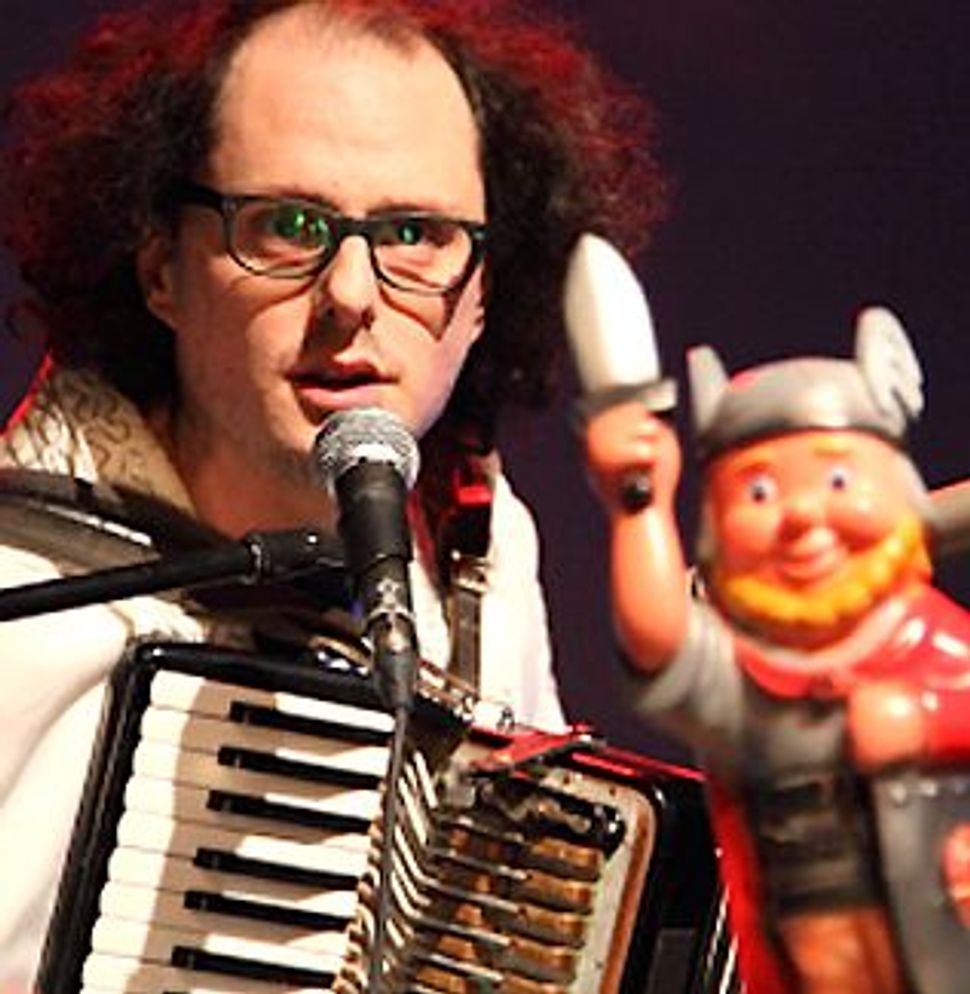 Socalled with ?Heinrich.? Image by NFB 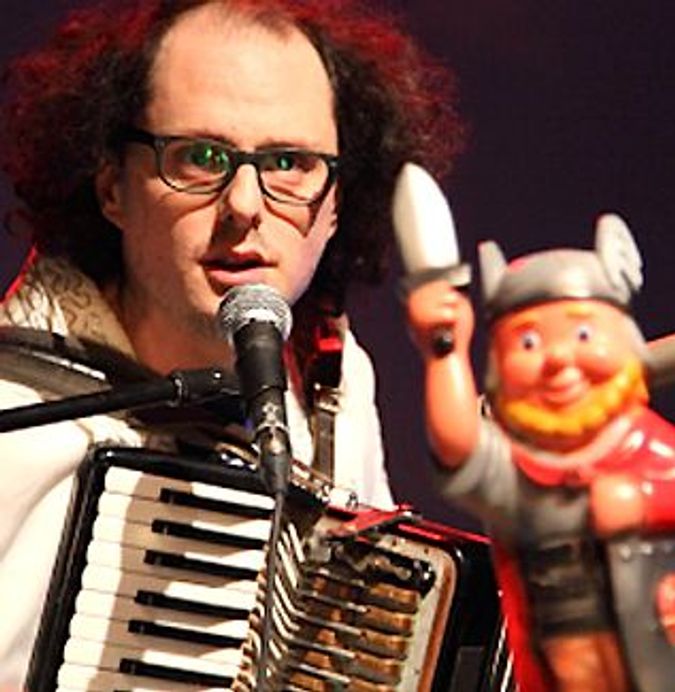 Socalled with ?Heinrich.? Image by NFB

The International Accordion Festival is not well known outside of Texas, and that’s a shame. For a decade, the people of San Antonio have been treated, at no charge, to a well-curated collection of accordion traditions from around the world. Though it recently celebrated its 10th year, the festival enters an uncertain future, having lost much of its funding and having suffered a disastrous episode in 2009, when the event was almost rained out entirely. This year, rather than featuring three stages at the historic La Villita, just blocks away from the Alamo in downtown San Antonio, only a single stage remained.

If you hadn’t been to the festival before, however, you would never have known that anything was amiss. From October 15 to 17 a large crowd packed the impressive Arneson River Stage, where the performers are separated from the audience by the actual river of the famed “River Walk.”

Despite the festival’s distance from the main stream of Jewish Culture, Jewish music has been well represented there. Past years featured performances by Veretski Pass, Michael Alpert, Steven Greenman, and Philadelphia’s amazing Elaine Hoffman Watts. This year, I was at the festival accompanying Josh Dolgin, aka Socalled, the hip-hop klezmer sensation — and accordionist.

“What I really loved about programming this event, is that I get to trick people,” noted festival founder Pat Jasper. “They think they’re going to get one thing, and when they show up they get something they hadn’t expected. And almost always something way better than what they thought they came to see.”

That’s as apt a description of Socalled’s set as I could imagine. The day’s line-up was described as “eclectic,” opening with an Austin-based roots rock act, a surprisingly awesome Tex-Mex-Punk conjunto with the moniker Pinata Protest (trust me, they rocked), a better-than-average Arabic ensemble from Austin complete with belly dancer, and our man Socalled, before closing with Geno Delfose, arguably one of the best Creole Zydeco bands on the planet. The weather was typical Texas October, hovering in the comfortable mid-70s.

I had never previously played with Socalled, outside of a few “all star” Jewish music festival jam sessions. True to form, he hadn’t sent me any music or charts to study and I had no idea what musicians he was bringing with him or what we would play. All I knew is that I was supposed to meet him at his hotel around 3 p.m. for a rehearsal. I was happy to find that he had brought clarinetist Michael Winograd for the date, as he’s one of the truly great new bandleader-composers on the New York City klezmer scene, and Katie Moore, Socalled’s long-time singing partner. That left me with tuba and bass duties. At rehearsal I found a stack of hastily prepared charts (Winograd said that’s more study material than he’d ever seen before and he’s toured Europe with this band). We did a quick run through, spending most of the time learning the tricky bass line to a vocal quartet number that we never wound up playing — but I got it nailed for next time!

Taking the stage with a keyboard, a sampler, and a little toy Viking that he introduced (on more than one occasion) as “Heinrich,” Dolgin started off with a lovely Yiddish song, accompanied only by his accordion. With that nod to tradition dispensed with, the beats cranked up. It was quite a shock for an audience that had no context for Yiddish, klezmer music, or Jews at all. But no matter — Socalled is an engaging and infectious performer and he furiously bid the audience to clap and sing along, which they did.

The set moved along smoothly, given the lack of preparation, transitioning from way-out-there dance beats to a stripped down acoustic trio of the oldest kind of klezmer. Somewhere in the set there was a magic trick involving a ripped up festival program, presented in complete silence to a rapt audience. Towards the end, in the middle of an old 2nd Ave. chestnut, Dolgin stopped the song cold for a moment and said, “I’m singing in Yinglish, right? Kinda of like the Spanglish you guys have here, eh?” The audience hooted in recognition.

Afterwards, Dolgin sold most of the music and books that he had brought and the band headed out for a stroll around the Alamo and a late night nosh at Mi Tierra, famous for its great Mariachis and the finest Tres Leche cake in all of Texas. I’ve performed at this festival pretty much since it was founded a decade ago, and I can safely say that Socalled’s set knocked the ball way out of the park. Even if Jews in America today are often estranged from their traditions, I think we can rightfully look to an artist like Dolgin to provide a genuine context for a modern Jewish-Yiddish culture.

Mark Rubin lives in New Orleans. His latest striped down folk effort “Songs for the Hangman’s Daughter” is an eclectic and personal collection of original songs featuring much of Rubin’s diverse musical lexicon, but most of all expresses ongoing efforts to reconcile his multiple musical identities as a culturally Jewish musician operating in the American South.