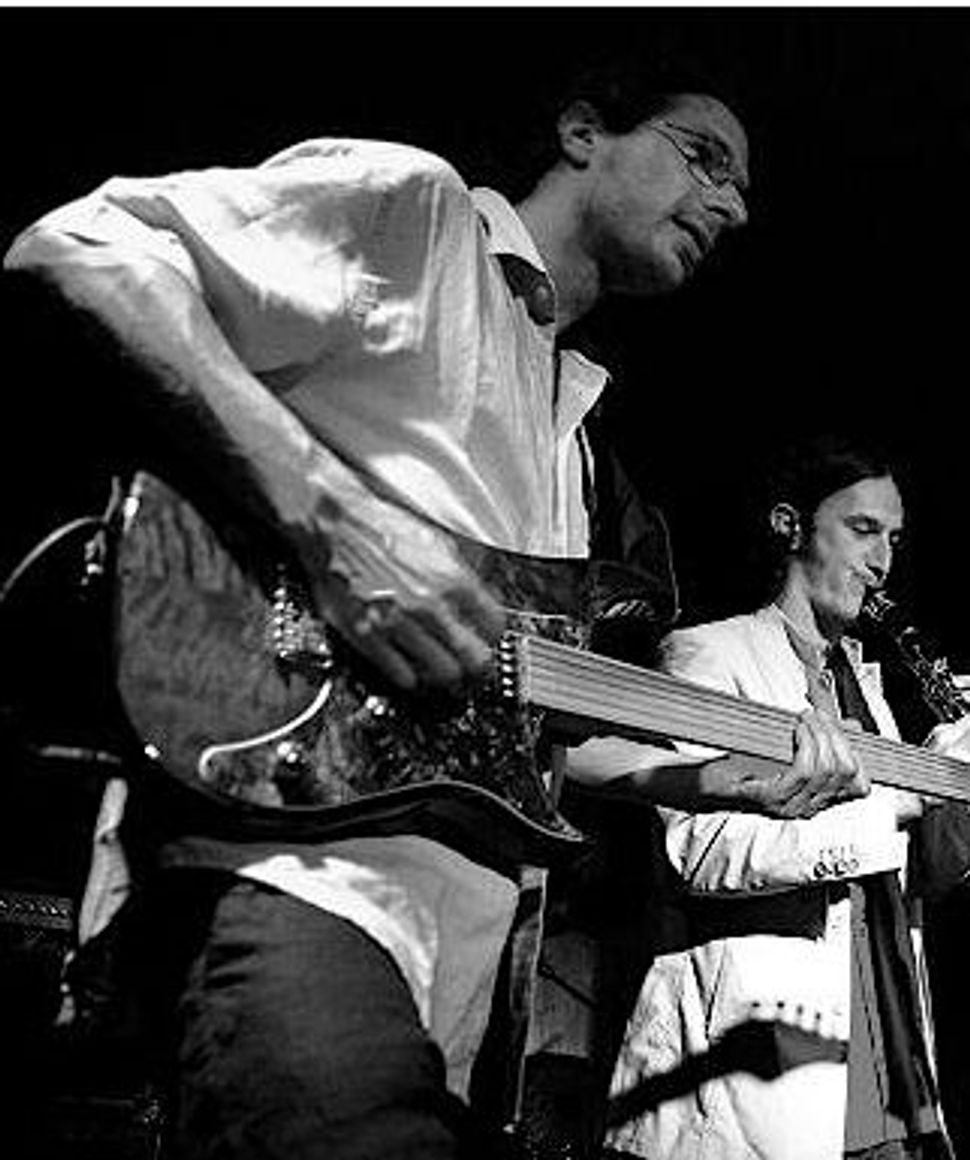 David Konopnicki and his fretless guitar. Image by AutorYno

Such a crossover seems unlikely with “Pastrami Bagel Social Club,” the debut album by AutorYno, a French trio who are playing in New York this week as part of the Tzadik Records Guitar Festival. With their pastiche of jazz precision, punk rock fury, and heavy metal bombast, AutorYno sounds like a funky soundtrack to the apocalypse. Along the way, they tip their hats to klezmer music and Jewish culture, most notably with a “Traditional Hora” that sounds like what might happen if you hired Metallica to play at your wedding.

Despite its hard-edged sound, “Pastrami Bagel Social Club” aims beyond headbangers, as evidenced by its release on Tzadik, the record label of avant-garde guru John Zorn. One thing that distinguishes AutorYno is that David Konopnicki plays a fretless guitar, which lets him slip and slide between pitches as if he were playing a violin or a cello. On “Kelev,” his swoops sound like dive bombs; later his slurs add a hypnotic effect to a six-note phrase that he repeats for more than a minute.

As the lead melodic instrument, Konopnicki’s guitar dominates AutorYno’s sound. The bass and drums mostly anchor the complex rhythms in the background, though they do have their moments in the spotlight. Drummer Cyril Grimaud takes a solo on “Five Flavors.” On “Crapaud,” Bertrand Delorme plucks, slaps, and pops his way through a bass solo that quotes John Coltrane’s “A Love Supreme.”

Throughout the record, AutorYno shows their eclecticism and versatility with sudden shifts in moods, dynamics, tempo, and time signatures. Sometimes, the abruptness makes the music feel disjointed, as when the accordion that opens “Ouverture Automatique” yields to distorted guitar sludge, then a klezmer-style clarinet. But mostly, the shifts are seamless and let the band cross-pollinate among musical genres.

If “Buena Vista Social Club” can be background music, “Pastrami Bagel Social Club” demands full attention — and should be played at full volume. Despite the seriousness and intensity of the music, however, AutorYno injects an air of playfulness with their song titles. “Kelev” is Hebrew for dog. “Malossol” refers to lightly salted caviar. “Crapaud” is French for toad and alludes to France’s royal heraldry; “Jean Crapaud” is slang for a typical Frenchman, the Gallic equivalent of John Bull in England or Joe Six Pack in America. Or since it’s election season, perhaps it’s best translated as Joe The Plumber.

AutorYno will be playing on Nov. 1 with Rashanim at Rose Live Music and on Nov. 2 with Edom at nublu.

Watch AutorYno play in July at the Sum Festival in France: