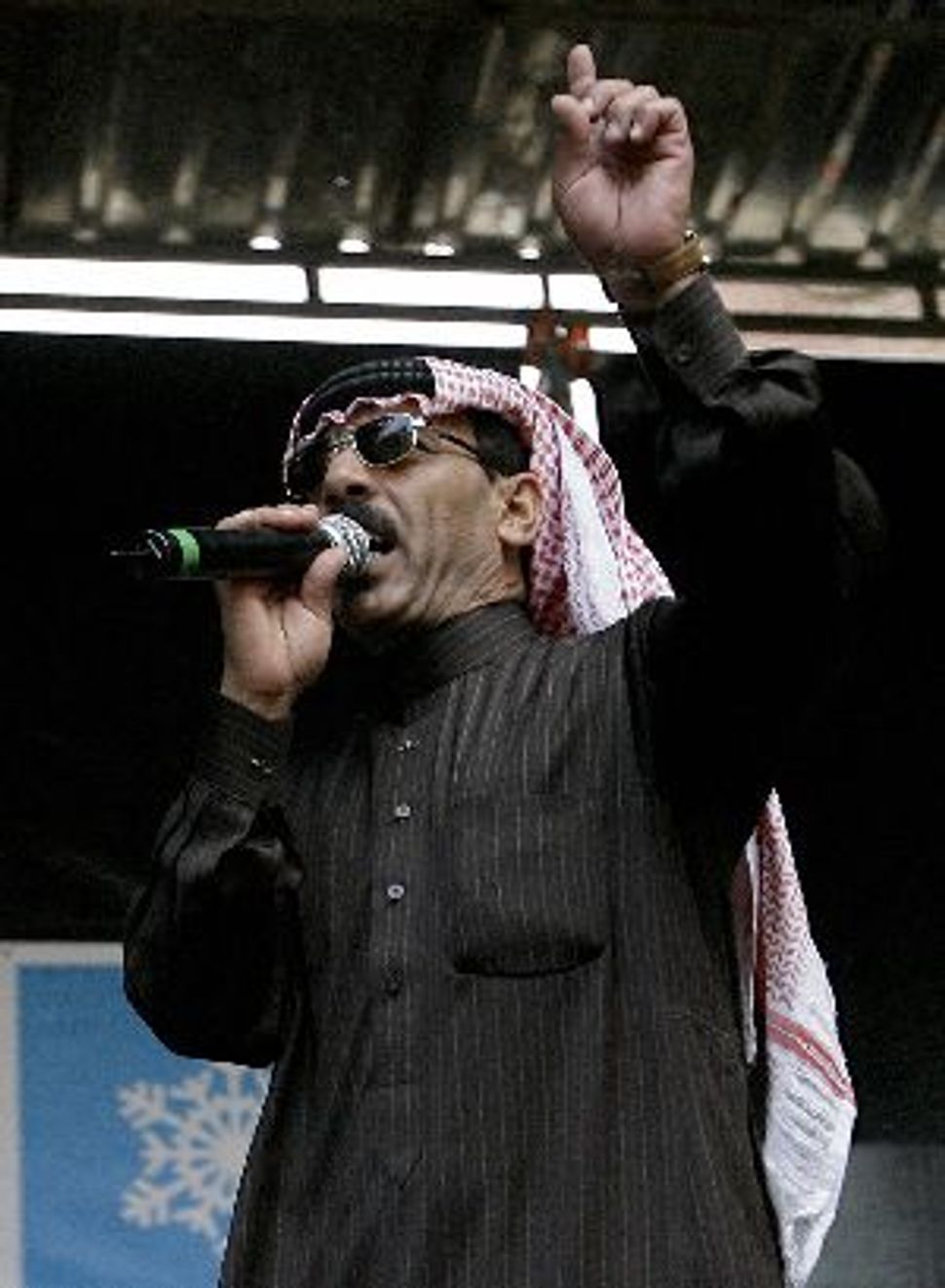 Omar Souleyman at the 16th Sonar Festival in Barcelona in 2009. Image by JOSEP LAGO/AFP/Getty Images

Omar Souleyman is a singer from Hasakah, Syria, who plays a techno-ish version of dabke, an Arabic folk music usually heard at weddings. He performs in a red-and-white checkered keffiyeh, dark glasses, and a moustache.

Not the most likely artist to take the American hipster-indie music scene by storm, you say? Think again. Now on his second tour of the U.S. to promote “Jazeera Nights,” his third album on Seattle’s Sublime Frequencies label, Souleyman performed Tuesday for a sizeable crowd at the Music Hall of Williamsburg, last night at the Paramount Theatre in Boston, and he appears tonight at Purchase College, SUNY.

On Wednesday he played a show in Philadelphia at Johnny Brenda’s, where he made another strange connection: Opening for Souleyman was Electric Simcha, a month-old Hasidic punk outfit led by trombonist and vocalist Daniel Blacksberg. The Arty Semite spoke with Blacksberg about Electric Simcha and how it came to play for hundreds of hipsters in Fishtown with one of the Middle East’s most popular artists.

Ezra Glinter: What is Electric Simcha?

Daniel Blacksberg: We play Hasidic music, in a punk rock way. Right now we’re doing more or less a wedding set that could easily be heard on any Orthodox or Hasidic bandstand. We don’t start with “Od Yishama,” but we’re basically starting on the third tune of that medley. But we’re going for a loud and fast, hardcore punk aesthetic — bands like Black Flag and the Minutemen come into the picture. It’s a distorted, agressive, heavy kind of sound.

Who else is in the band?

How did Electric Simcha come together?

These are guys who I’m really bringing into the Jewish music world. I know them from playing in rock bands and jazz and experimental music around Philly, and I like the way they play. Plus we’re just friends, and we hang around together and play music together in lots of different situations.

I think the music came about in a performable way in September. We played our first show as a band October 5. Before there were people coming together to play some gigs, and then we said, ‘Hey let’s make this a band.’

How did you come to open for Omar Souleyman?

A couple members of the band, specifically Julius and Nick, had seen Omar when he played in New York, and when they found out he was playing here they were super psyched to see him. And we were talking at rehearsal, and thought it would be super cool to open for him. And Julius was able to reach out to the guy who was putting the show together and get us on.

How did the combination of Hasidic punk with dabke music go over?

So it was a good show?

Yeah. Omar has this incredibly strange draw — there were just hipsters as far as the eye could see. I saw maybe 10 people who looked Arabic out of maybe 300. Nobody could understand what he was saying or had any familiarity with the music, but they were all just moving. It was unbelievable.