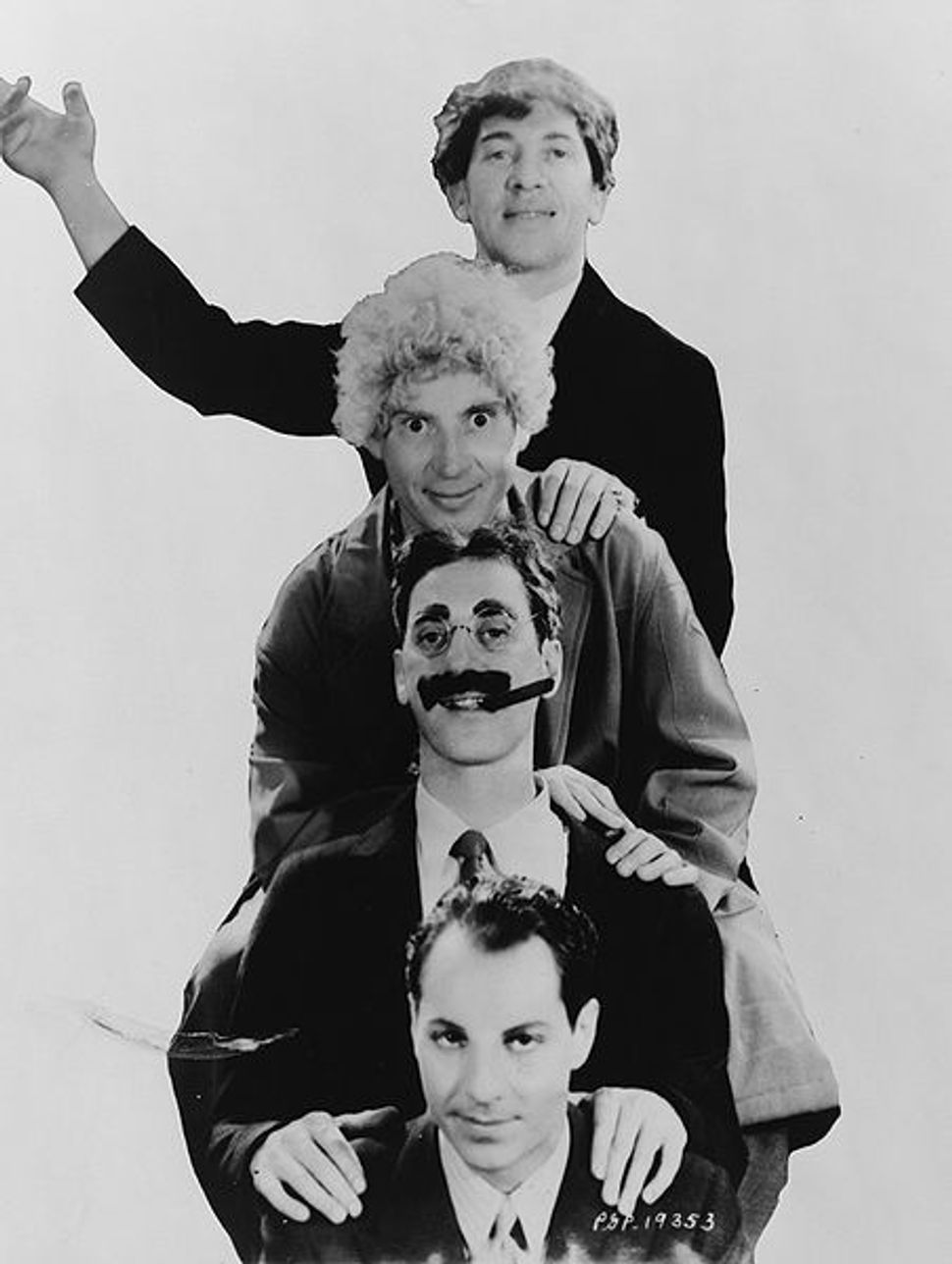 There were few Jewish comedians in Aristotle’s day, but in American comedy, Austerlitz notes, Jews are “the only minority group overrepresented.” The title of his book is taken from a catch phrase by the gentile comic geniuses Laurel and Hardy, but on the cover of the book, it is Jewish comedians, The Marx Brothers, who are making a mess. For Austerlitz, the Marx Brothers are the embodiment of Jewish humor — “anarchic, absurdist, and ebullient” — existing in the face of a hostile or dismissive power structure.

Yet this assertion raises interesting questions about what exactly Jewish humor is, or is not. Austerlitz notes that the Marx Brothers’ antics are the antithesis of the sentimental comedies made by German Jewish émigré Ernst Lubitsch. Austerlitz also claims — anachronistically — that it was not Hitler who drove Lubitsch to Hollywood but America’s sweetheart, Mary Pickford (Lubitsch left Germany in 1922, well before Hitler was a serious problem). Perhaps this is why he unfairly penalizes Lubitsch for his lack of overt Jewishness. For instance, he gives short shrift to Lubitsch’s brilliant anti-Nazi comedy “To Be Or Not To Be,” explaining that the film is only conceivable prior to the Holocaust. Not surprisingly, Austerlitz also dismisses out of hand Mel Brooks’s remake, and he thinks very little of “The Producers.” Perhaps he does not like farce in general, and especially not when it involves Nazis.

There are also chapters on other Jewish comedians and comic filmmakers such as Lubitsch’s protege Billy Wilder, Jerry Lewis, Dustin Hoffman, Woody Allen, Albert Brooks, The Coen Brothers, Ben Stiller, Judd Apatow, and Peter Sellers. Austerlitz’s treatment of the last of these is perplexing. Given that Sellers was Jewish, did not hide it, and that he suffered anti-Semitic indignities throughout his life, it is surprising that Austerlitz makes no attempt to address Sellers’s Jewishness. Such a discussion would have been intriguing given that Sellers was famous for completely disappearing into his roles, and that in “Dr. Strangelove” Sellers gave the silver screen one of the most enduring images of comic Nazi insanity as the eponymous destruction-obsessed lunatic. Similarly, Austerlitz fails to address the Jewishness of “Dr. Strangelove’s” director, Stanley Kubrick.

Mostly, Austerlitz has condensed and rehashed biographical information that is readily available elsewhere. Indeed, his entire thesis may be somewhat dubious, given the copious critical writings praising the works of Woody Allen, Jerry Lewis, Ernst Lubtisch, Preston Sturges, W.C. Fields, Mae West, Buster Keaton, Charles Chaplin, Leo McCarey, and Richard Pryor, to name just a few of the subjects of this book. Austerlitz’s greatest achievement is his essays on newer comics who have not been the subjects of much serious writing, including Ben Stiller, Will Ferrell, and Judd Apatow. Despite this book’s deficiencies, it would be interesting to see what Austerlitz might do with a second volume — “Another, Another Fine Mess”? — freed from the pressure to cover so much ground.