New York Vs. Washington: Whose Menorah Is Bigger? 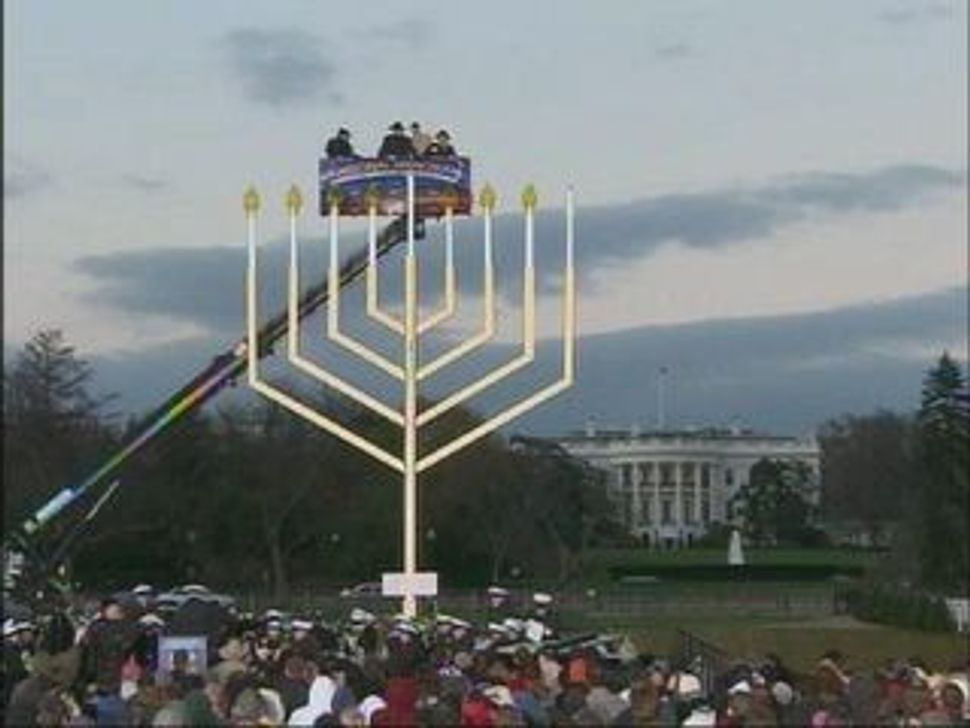 Is a New York-Washington rivalry about to erupt over menorah size? While NY1 News is claiming Mayor Michael Bloomberg lit “the world’s largest menorah” to kick off Hanukkah in New York last night, some news sources are claiming the National Menorah on the White House Ellipse — ignited yesterday in a ceremony attended by a Jewish Obama Administration official — is, in fact, the biggest in the world.

As far as ceremonies go, Washington had the edge, with performances by violinist Itzhak Perlman, the United States Navy Band and The Three Cantors. The highest-ranking member of the cabinet, Office of Management and Budget Director Jack Lew — accompanied by two rabbis — lit the first candle of the National Menorah. Contradicting NY1’s assertion, web sites like ThirdAge.com and the Philadelphia Jewish Voice were calling D.C.’s menorah “the world’s largest”.

At Brooklyn’s Grand Army Plaza, Mayor Bloomberg was lifted by a Con Ed “cherry-picker” crane to light a 32-foot, 4,000-pound steel menorah that at least looked like the biggest on the planet. “It’s for everybody in New York,” Bloomberg told the crowd, according to NY1. “Regardless of your religion, and regardless of where you come from, we’re all in this life together. So, Happy Hanukkah to everyone, whether you’re Jewish or not.”

The first National Menorah lighting was in 1979 and was attended by President Jimmy Carter. Last year, the menorah was lit by former White House Chief of Staff Rahm Emanuel.

New York Vs. Washington: Whose Menorah Is Bigger?