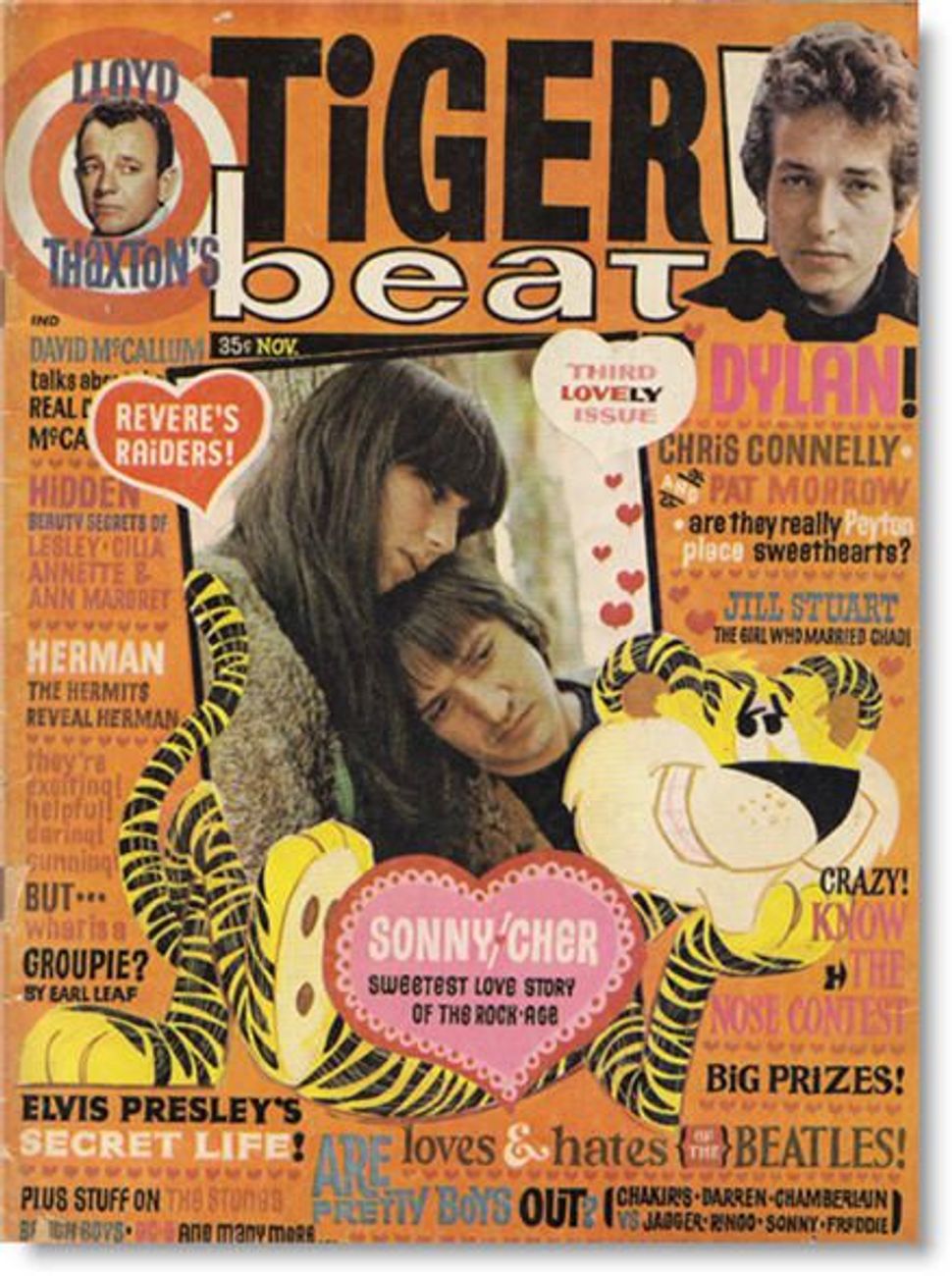 Bob Dylan, Sonny and Cher on the cover of Tiger Beat Magazine, 1965.

Once upon a time William G. Scheele, who was the equipment/stage manager for The Band and Bob Dylan from 1969 to 1976 and a photographer whose work is on exhibit at the 14th Street Y’s Forward-sponsored December event, Bob Dylan and The Band: What Kind of Love Is this?, snapped a red-tinted picture of Dylan and The Band jamming with, of all people, Cher. Cher! It was an extremely arresting photograph — were they playing a wedding gig in Hell? — and, as the founder of the improvisational-writing website QuickMuse and the editor of JBooks, I thought it would make for a great session of improvisation. So I sent it to novelist Rick Moody, and asked him to improvise a written response.

Why Moody? Other than the fact that’s he’s a amazing fiction writer — his latest novel is “The Four Fingers of Death” — and has been on QuickMuse before, he is a working musician (he’s in the Wingdale Community Singers) and he once published a great lyrical essay about “Blood on the Tracks” in an anthology titled “Studio A: The Bob Dylan Reader.” Here’s Moody’s piece, which is, in our opinion, a superlative piece of musical criticism. Analysis. Appreciation. Whatever you call this real-time composition, it resists any goofy attempts at classification.

Moody wrung so many amazing and true real-time comments from that weird shot of Dylan, The Band, and Cher. Makes one think that maybe music criticism should always be written by great novelists, and against a clock!

“Cher stands for everything that Bob Dylan occasionally is.”

“We should believe that Bob Dylan knows exactly what he’s doing, and that his oscillations between the sincere and the completely contaminated are coherently navigated by an intelligence that is fierce, slightly cynical, and totally provocative, and that these are balanced by an intuitive understanding of spirituality in music.”

“This contradictory set of characteristics has a Beckettian cast to it. Indeed, though we often think of Dylan as though he is a Chaplin or a Keaton (humorous and utterly without discernible affect), he is more like a character from Beckett — complex, paradoxical, dressed in rags, forsaken by God–than his is like a silent film star. I’m thinking of ‘I can’t go on, I’ll go on,’ from the Beckett trilogy, as a sort of matrix sentence for the Bob Dylan who would jam with Cher.”

What Moody says about Dylan and Beckett feels exactly right — and part of the reason for this is that his opinion comes from a practicing novelist and musician, rather than a music critic or historian. What kind of artistic risks do record reviewers take when they write about Dylan?

In any case, Moody’s off-the-cuff piece is undeniably cool. Even cooler: The 14th Street Y, in partnership with JBooks and QuickMuse, is bringing Moody and David Lehman (who improvised an interesting poem on the red-tinted photo) to come talk Dylan, live before an audience, on January 19th, at 7 p.m. Maybe we should see if Cher’s available…