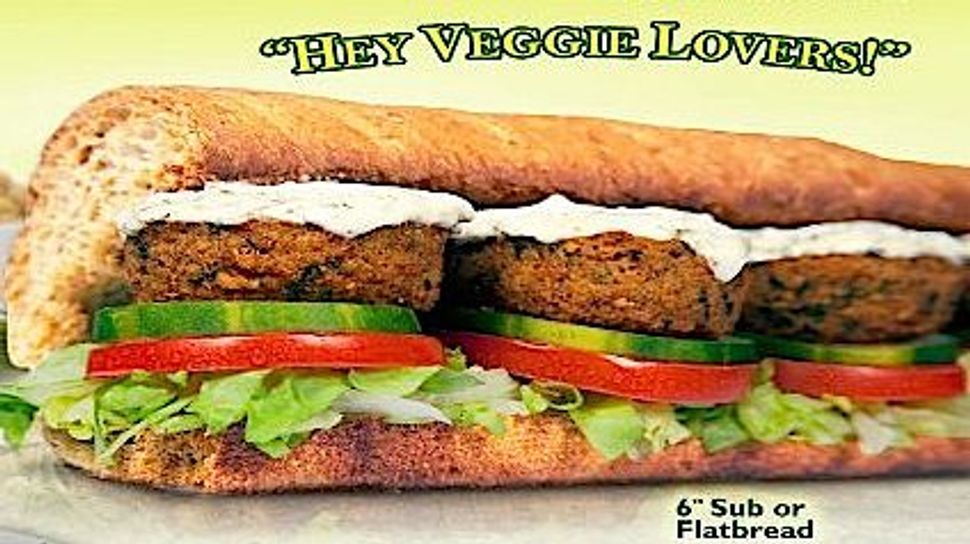 With hummus sweeping grocery stores across the nation, perhaps it’s not surprising that a major fast-food chain is experimenting with falafel.

The Subway sandwich chain has gotten into the act with its new falafel sandwich, which the company is currently testing in the Chicago area. The chain is billing the meal as a healthy option, noting that it contains no saturated fat and is a good source of protein.

A special Web page promoting the sandwich shows it offered on whole-wheat bread in the traditional sub-sandwich style, as well as on a piece of flat bread that resembles pita crossed with Wonder Bread. The sandwiches contain chopped tomatoes and cucumbers, as well as what appears to be Subway’s take on tahina.

Although the sandwich is still in its testing phase, it has already earned a strong reaction from the Chicago Tribune, which held it up as the latest example of a worrisome trend in fast food: when chains step outside their traditional areas of expertise. (Other transgressors include Domino’s, which now offers buffalo wings in addition to pizza, and Dunkin’ Donuts, which sells Bagel Twists and Pancake Bites.)

With nearly 24,000 restaurants across the U.S., Subway could play a big role in the further mainstreaming of Middle Eastern food. The chain already has a surprisingly strong foothold in the Middle East, including five locations in Israel, four in Egypt and a whopping 41 in Saudi Arabia.

The company’s Web site says that the Middle East — Bahrain, of all places — was the first place it opened outside of North America, back in December 1984.