Will Film’s Nudity Keep Hasidim Away From ‘Romeo and Juliet in Yiddish’? 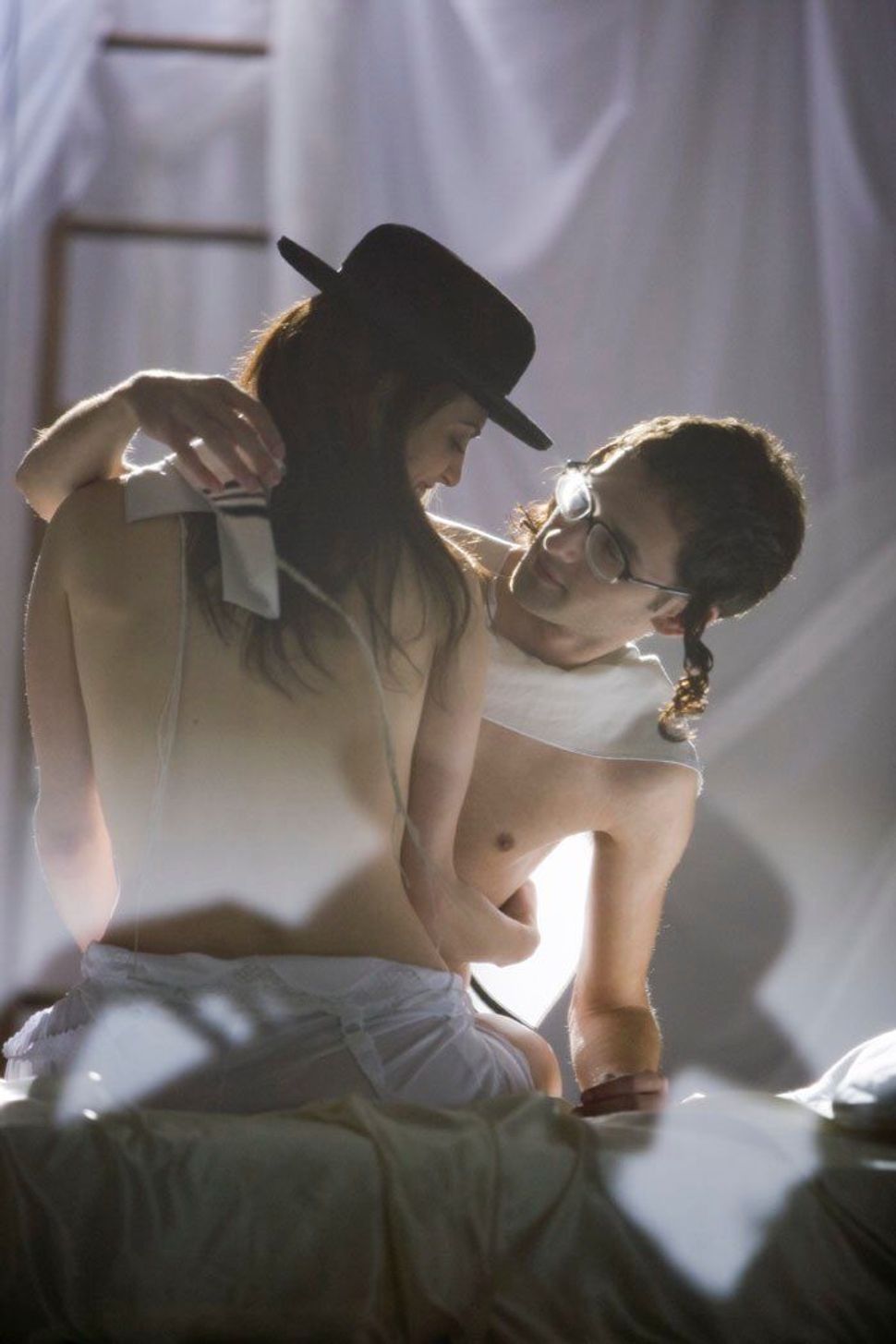 Tongues have been clicking in the Orthodox world about the U.S. debut of Eve Annenberg’s feature film “Romeo and Juliet in Yiddish” (which I previously wrote about for the Forward here), but the New York Jewish Film Festival screening on January 16 at Lincoln Center sold out quickly and the Hasidic dropouts-turned actors who star in the film expect a huge black hat turnout.

On the frum woman’s web site imamother.com someone who grew up in Boro Park with former Satmar beauty Malky Weisz, who plays Juliet, posted: “I think this film is going to create a huge chilull ha shem [desecration of G-d’s name], even though I have no inkling as to what the story line is.”

And Isaac Schonfeld, who coordinates the Chulent gatherings of outsider Orthodox Jews where Annenberg met much of her cast, says he won’t see the film because he has heard it has nudity in it. (A love scene in which Romeo and Juliet are seen in bed does provide a clear view of Weisz’s breasts.) Schonfeld, who plays an EMT and a rabbi in the film, told The Arty Semite, “I am not trying to make any statement about the film nor about nudity as artistic expression, it is only that I feel uncomfortable with it.”

The 27-year-old Weisz was seen in the Chelsea section of Manhattan this week wearing a very short skirt and tights that would be verboten back in Boro Park. She was accompanied by the love of her life, pony-tailed actor Lazer Weiss, who plays Romeo in the film. Weiss, 26, is also a former Satmar Hasid. The couple fell in love while making the film in 2009 and are now living together in the Williamsburg section of Brooklyn, a stone’s throw from where Weiss grew up. They have plans to make a documentary about suicide in the frum world and are working on a screenplay for a comedy about hipsters and Hasidim in their neighborhood.

Weisz expects, at most, two of her six sisters to attend the screening at Walter Reade Theater at Lincoln Center. She doesn’t want her parents to come because “they won’t get the film.” Weisz’s family, she says, has been supportive despite her decidedly non-Hasidic lifestyle, which includes modelling and designing lingerie.

One sign of the enduring pull hassidus has on these so-called heimishe rebels is that Mendy Zafir, a 26-year-old Satmar drop-out who plays Benvolio in the film, now does PR and marketing work for the Orthodox community out of an office in Boro Park. Zafir, who has a face that Jiulliard acting coach Eve Shapiro describes as angelic, was initially so on the outs with his family that he slept on the subway for a month as a teenager. But now he’s back home, living with his folks in Williamsburg, though he tends not be home for Shabbos. In the last two weeks he’s been inundated with text messages from black hat friends asking about tickets to the two screenings at Lincoln Center.

Director Eve Annenberg reports the film will screen in Minneapolis in March and Montreal in 2012. According to Annenberg, a distribution deal is pending. She hopes to film Shakespeare’s “A Midsummer Night’s Dream” in Yiddish as her next project with the ensemble of former Hasidim.

Watch the trailer for ‘Romeo and Juliet in Yiddish’:

Will Film’s Nudity Keep Hasidim Away From ‘Romeo and Juliet in Yiddish’?