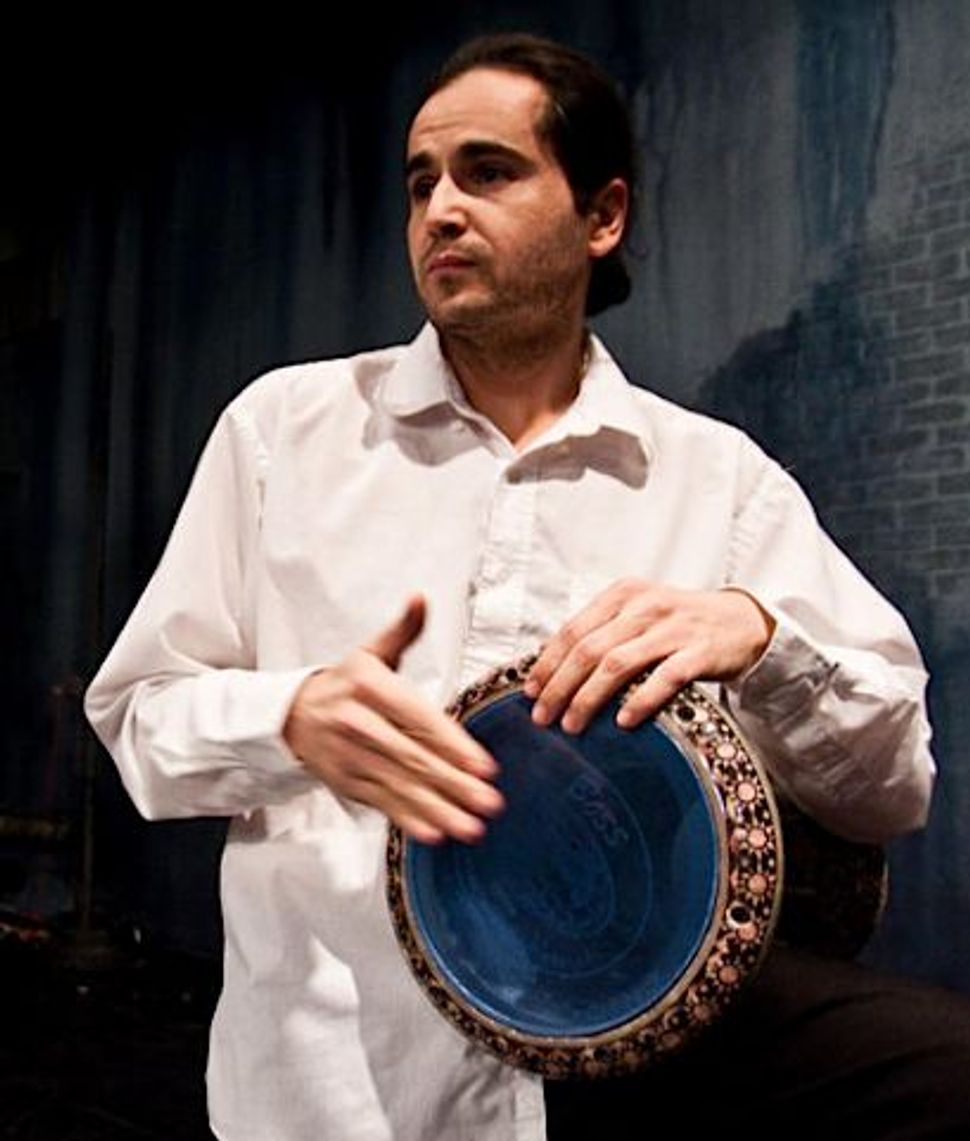 When I entered Saint Joseph’s Catholic Church in Greenwich Village on a recent Sunday afternoon to see the play “In Between,” which explores the cultural identity of a Palestinian-Muslim/Jewish-Israeli man, I suddenly felt hyper-aware of my own Jewish identity. It seemed telling to me, and surprising, that the only current New York performance of this show was being held at a church (the play is also being staged February 9 at Nichols College in Dudley, Mass). While I’m sure there were Jews in the audience (I overheard an Israeli woman speaking with the performer after the show in Hebrew), the crowd was indeed mixed. Many attendees were members of Pax Christi, the organization that hosted the event and which is a part of the national Catholic peace movement.

“In Between” is an autobiographical one-man play created by Ibrahim Miari, who was born in Akko, Israel, to a Palestinian-Muslim father and a Jewish-Israeli mother (Miari’s mother converted to Islam in order to marry his father, though both were not religious at the time). The circumstances of his parents’ meeting are shrouded in mystery, as they were elusive about it with their two children, so Miari conceives a fictional account in which his dad spots his mom walking on the street as he drives by in a VW Beetle, blasting the Beatles song, “All You Need is Love.” Throughout the play, Miari seems to imply that while the “love-conquers-all” veneer of cross-cultural romance may appear simplistic, a sweet approach to such stories, combined with a touch of silliness, is sometimes necessary in the face of serious political conflict.

The intercultural love story of Miari’s parents recurs in Miari’s own life, when he meets and falls in love with a Jewish woman named Sarah, when both were counselors at an Israeli-Palestinian camp in Canada that teaches children peace and tolerance. His play interweaves the narrative of his own love story with that of his parents, along with childhood memories of living in between Israeli and Arab communities.

One significant event in the play is based on a recent incident in which Miari was taken aside and searched by an El-Al security guard. The experience was clearly humiliating, and Miari depicts it with stinging satire. He slaps on a latex glove and performs the body search on himself, stopping to jump to another narrative about how he and his fiancé can’t find a rabbi who will agree to marry them. Leaping back to the airport scene, he portrays the Israeli security guard inquiring of his name, “Is it Avraham or Ibrahim?” When Miari replies “Ibrahim,” the tension rises. He explains his family background to the security guard who seems to appreciate these facts light-heartedly, until he notices the name on Miari’s suitcase: “Who is Sarah Goldberg?” he asks. “You don’t look like a Sarah, and you certainly don’t look like a Goldberg.”

The incident stands out as a quintessential reminder to Miari that he will always be perceived by others as not quite fitting into one category or another. As he later says, with frustration, according to everyone else he is not Jewish enough, not Palestinian enough, not Muslim enough, and not Israeli enough. The fact that he and his fiancé refuse to raise their future children exclusively in one religion also causes problems, not only for the rabbi who won’t officiate at their wedding, but also the sheik they later approach. Miari is even rebuffed by a Buddhist priest, the couple’s last resort, since he cannot agree to include alcohol or sutra-chanting at the wedding ceremony. Unfortunately, he’s not Buddhist enough either.

The more we learn about Miari’s history, the more its political contours are revealed. One particular childhood memory highlights the tensions that his existence embodies. At the age of seven Miari wins a Purim costume contest at his Jewish school, for dressing up as a garden in bloom (complete with an adorable “Please Don’t Step on the Grass” sign), only to have the prize stolen by an older girl. His father responds angrily, and suggests that perhaps next year he should go as a cactus to remind his Jewish friends of the land that was stolen from the Arabs. Later, Miari transfers to the Arabic school only to experience the Arab version of Israeli Independence Day — Nakba Day (“Day of the Catastrophe”). He feels pulled by both sides, with both Jewish and Arab friends and family, and competing cultural histories, unsure of his place in a complex political world.

Though Miari’s journey toward solidifying his own identity is fraught with confusion, he ultimately finds comfort and meaning in both sides of his background, and he proudly identifies as a Palestinian-Israeli. Though he ended up having more social interaction with Arab communities, he still fondly remembers Jewish holidays spent with his Jewish grandparents in Tel Aviv. In a moving scene toward the end of the play, Miari explains that his Palestinian grandmother’s name, Nijmi, means “star,” as does his Jewish grandmother’s name, Esther. He imagines the two, who never had the chance to meet, as stars looking down and blessing his marriage to Sarah. Cheesy? Perhaps. But in the midst of such a violent and intolerant world, perhaps it is these silly love stories that will help bring about a real solution.

Watch a preview for ‘In Between’: