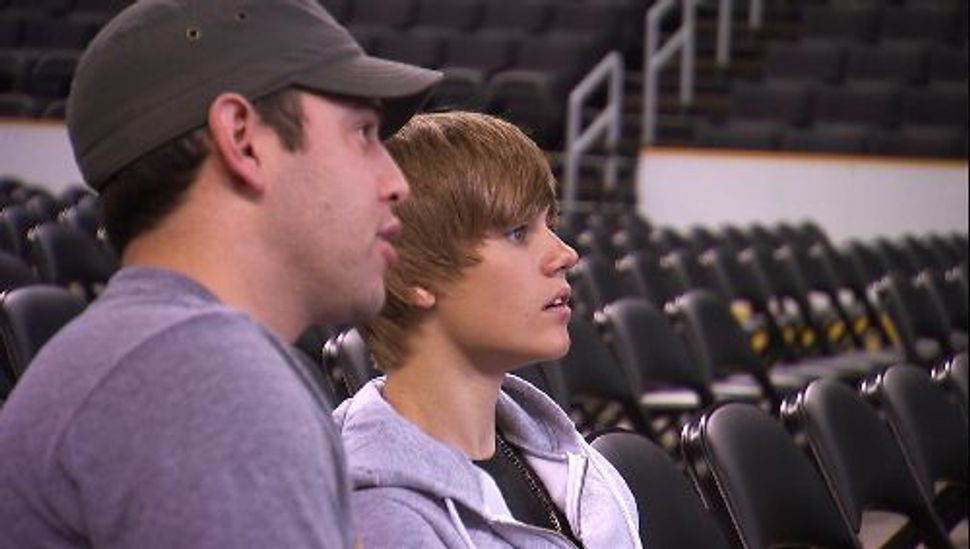 In a hostile world, where can frightened Jewish children find inspiration to be themselves? In the new Justin Bieber documentary, “Never Say Never,” according to Scott “Scooter” Braun, the 29-year-old manager of the world’s biggest post-adolescent pop star and a protagonist of the film. “There are kids who are picked on and deal with anti-Semitism,” Braun told the Forward’s Michael Kaminer by cellular phone between house-hunting visits in Los Angeles. “For them to watch this film and recognize someone in their culture — that’s why I feel so good about it.” “Never Say Never,” which documents the teen’s rise to fame and serves as a concert film, opened on February 11; Bieber is slated to play his first concert in Israel in April.

Michael Kaminer: Here’s how Justin’s mother, Pattie Mallette, described your first phone call in a 2009 New York Times profile: “I prayed, ‘God, you don’t want this Jewish kid to be Justin’s man, do you?… You could send me a Christian man, a Christian label!” How did you feel?

Scott Braun: That was completely taken out of context. If Pattie was anti-Semitic, she wouldn’t be like a sister to me, and she wouldn’t let me be a father-figure type in her son’s life. She’s a devout Christian, but she’s respectful of other people and other cultures.

You and your crew recite the Sh’ma before performances. What does the prayer mean to you — and to non-Jewish members of your team?

It means we’re included. If there was a Muslim, or a Hindu or anyone from any other culture, and they wanted to say their own prayer, we’d invite them to do so, as well. It started because Justin and the crew would do a prayer — “in Jesus’ name, Amen.” I wanted my own people to have protection, so I would say the Sh’ma with our musical director, Dan Kanter, who’s also Jewish. Justin heard us; he’s like a sponge, so he memorized it and chimed in. It became a tradition.

Your paternal grandparents survived Auschwitz and Dachau. How much of an influence has your family been?

All four of my grandparents have been an influence…. I’ve always taken pride in knowing my family died so I could be who I am. It’s a part of my personality that’s always bigger than me, and an incredible influence.

Your public relations people distributed a story that says you introduce yourself as “Shmuel Ben Eliezer.” Is that on your business cards?

[He laughs.] No. I only use it when I get called to the Torah. I did an article with a newspaper in Israel, and I spoke passionately about my faith and culture. I mentioned that it’s my Hebrew name, but I think Wikipedia or somewhere picked it up and said it’s my birth name.

Can you give Forward readers the elevator pitch on why they should see “Never Say Never”?

Here’s the best way to sum it up: I grew up [in Greenwich, Conn.,] around not a lot of Jews. I assimilated very well. But there are kids who don’t…. The same way Justin can serve as role model for Christians, I hope Dan and I make people proud to be who they are.