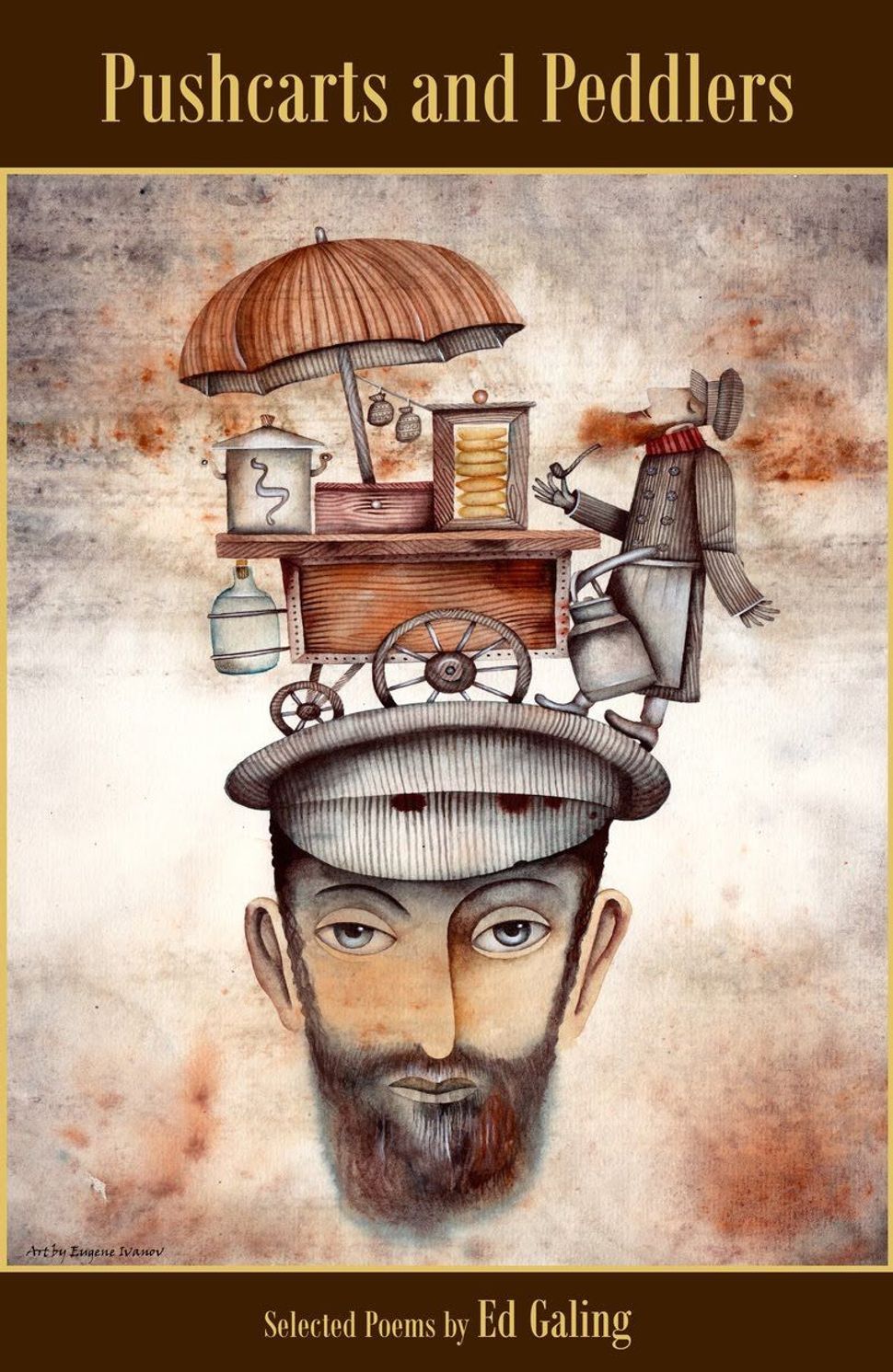 At 94, the harmonica-playing poet laureate of Hatboro, Pennsylvania has an ultimate wish. Although he has received numerous literary awards (including two Pushcart nominations), citations from the Pennsylvania House of Representatives and Senate, and has written over 70 chapbooks, he has long dreamed of seeing his Jewish poetry in a published collection. That wish was granted in February with “Pushcarts and Peddlers” from Poetica Publishing Company, an offshoot of the Judaica-themed Poetica Magazine.

It was a high school English teacher named Dr. Ginsberg who pushed Galing to read the classics and write poetry and articles for the school newspaper. He had plenty of material to draw upon. Galing’s first nine years were spent in a squalid Lower East Side tenement building among the bustle of pushcarts, peddlers and immigrants. This borderline existence quickly descended into abject poverty when his father’s first wife, long-considered dead in the “old country,” turned up together with Galing’s aunt.

Galing and his mother were soon left by themselves in South Philadelphia. “My mother never remarried, and was on welfare all her life,” he explained by phone from his longtime home in Hatboro, north of the city.

When Galing was 20, he met his wife, Esther, at a dance at the Jewish Neighborhood House. They married four months later, in 1938, and lived in a housing project in Warminster, Penn. prior to their home in Hatboro. After 68 years of marriage, Esther died in 2006 at age 88.

During the Second World War Galing worked in weapons manufacturing before joining the Army near the end of the conflict. “I was at Dachau,” he said. “I saw the ovens.” The Stars and Stripes published his story “The Lucky G.I.,” a tale of an American boy and a German girl. “It didn’t end happily, because he had to go home — he was a married man with kids,” he said, though insisting that it was fiction: “It never happened to me!” He joined the Naval Reserves as a Yeoman Second Class, and then worked in the credit department at an auto dealership in Langhorn, Penn. for almost 20 years.

All the while, he was writing and submitting manuscripts from the electric typewriter he still uses today. “They knew me at the post office,” he said. To date, about 400 of Galing’s poems have been published.

Galing’s productivity made putting together “Pushcarts and Peddlers” daunting. “He has many versions of similar poems, published under different titles,” said his publisher, Michal Mahgerefteh. “For example, he wrote a poem about Jack’s Deli in seven versions under seven titles.” The collection is divided into four sections: “Being Jewish,” “Lower East Side,” “Yiddish Language,” and “Senior Center.” Ibbetson Street Press publisher Doug Holder, who published Galing’s chapbook “Prayers on a Tenement Rooftop,” called him a “small press legend” and a “poet of the greatest generation.”

“As Ed grows older, more pain creeps into his writing: Watching friends and loved ones die, technology spinning past him, nursing homes and senior centers advancing, even seeing his sons become old men,” added publisher and editor Leah Angstman. “He writes me letters in which he recalls these pains, but also there is that undeniable spirit of chutzpah that defines him.”