Monday Music: From Prague to Masada and Back Again 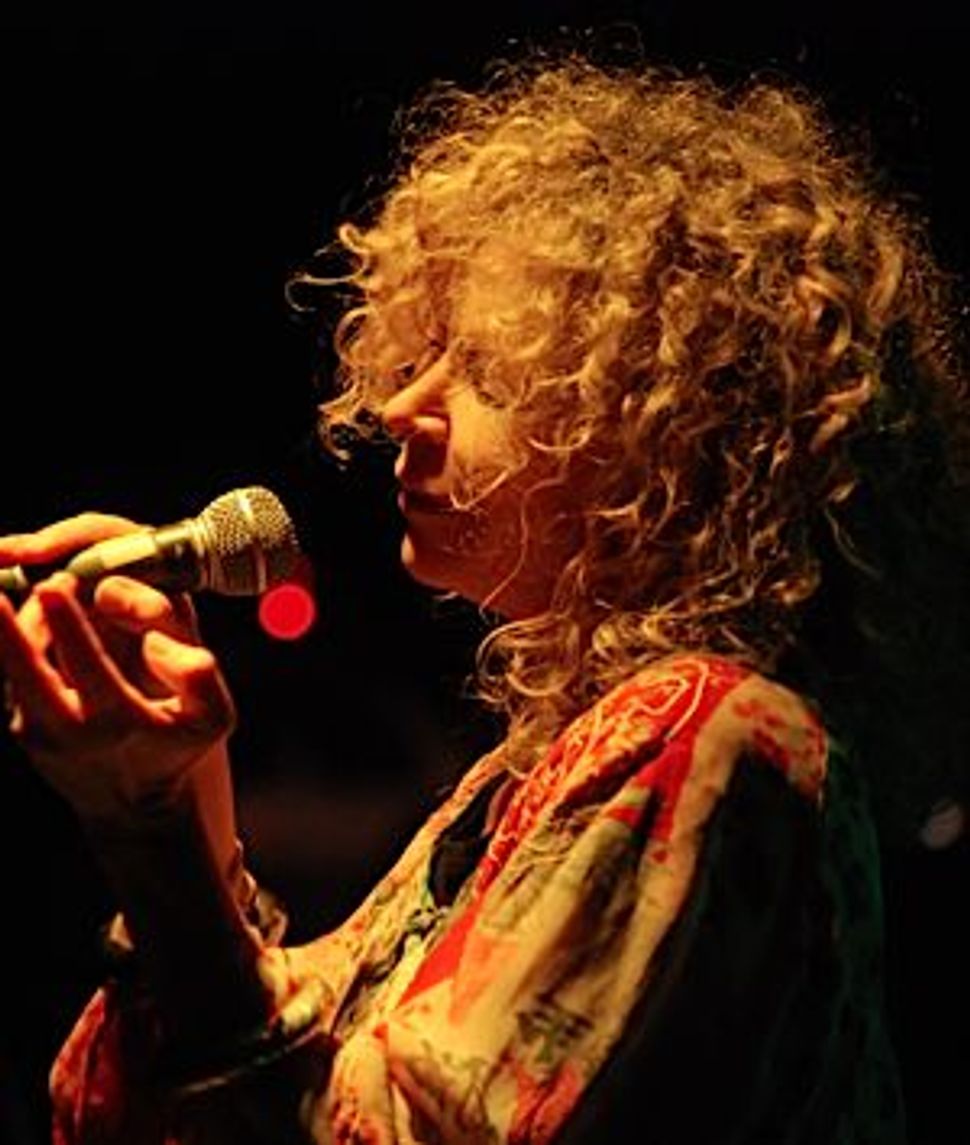 On her first visit to Israel in 1987, Czech-born Canadian singer Lenka Lichtenberg looked out from the top of Masada and never looked back. It was at that moment that she decided to leave behind her lounge singing career in pop, jazz, rock and folk and focus solely on perpetuating Yiddish culture through her music. Now, having built a noted international career in performing and recording Yiddish songs, Lichtenberg has recently released a new album called “Fray” (pronounced “Frei” and meaning “Free”), in which she circles back to Israel through her melding of Yiddish poetry with Middle Eastern and World sounds.

“I was always more attracted to sounds of the Middle East than of Eastern Europe, even though I was born and grew up in Prague,” the petite and animated singer with long curly blonde hair explained in an interview with The Arty Semite in her home in Toronto. However, her desire at the start to be “authentic, legitimate, to justify my connection to my personal roots,” (her father was from Moravia and her mother and grandmother were survivors of Theresienstadt) led her to ground herself firmly in the repertoire of Yiddish standards. Having grown up in Communist Czechoslovakia atheist and uneducated about her Jewish heritage, she “sometimes felt like an imposter. It was a strange dynamic singing to people who knew more about the culture than I did. But my voice really helped me to ease my way into the whole thing,” she reflected.

Indeed, it is Lichtenberg’s expressive and crystalline voice that carries the soulful lyrics and melodies above her compositions and arrangements for the Middle Eastern instrumentation on “Fray.” In a surprising and pleasing juxtaposition to Yiddish poems by Simcha Simchovitch, Mordekhai Gebirtig, Haike Beruriah Wiegand and Yosef Papernikoff, one hears the flute, oud and qanun. She has percussion going on, as well, including the dumbek, the Indian tabla and the Brazilian pandero — which she added for “more of a kick.”

Although she believes that Yiddish folk standards will always have a place and are excellent for connecting with older audiences, Lichtenberg — herself the mother of teenagers — is forward thinking about where Yiddish culture can go next. For her, it is about “helping to foster the future of Yiddish.” She believes that “if I present it in the right way, I will interest people who wouldn’t otherwise relate.”

Lichtenberg is taking Yiddish music to new places not only through her solo career, but also in her work arranging and performing vocals for Sisters of Sheynville, an all-women Toronto-based klezmer and Yiddish swing band. The group, which also includes Isabel Fryszberg, Fern Lindzon, Kinneret Sagee, Rachel Melas and Lorie Wolf, was named Vocal Group of the Year at the 2008 Canadian Folk Music Awards.

Additionally, she is immersed in “Songs for the Breathing Walls,” a project of great personal importance to her both in terms of her family history and her love of cantorial music. While performing concerts in synagogues in the Czech Republic in 2009, she felt unusually touched by the buildings, especially the more abandoned, derelict ones. “The walls were silent at first, but they opened up when I started singing,” she recounted.

As a result, Lichtenberg chose 14 out of the approximately 250 synagogues in the Czech Republic and Moravia, and recorded herself singing a selection from the Hebrew liturgy (traditional, new and original compositions) in each. She found that “each synagogue has its own character, ambiance, spirit – and, of course, history and acoustics.” She found that she sang differently in each synagogue, likening the experience to “a conversation between me and the place.” She collaborated with a number of international musicians on the project, including Israeli oudist and violinist Yair Dalal, who accompanied her on a Holocaust violin for “Stremlen faygel oyf di tzvaygn” (“Birds Are Singing on the Branches”), a nightmarish lullaby composed in the Vilna Ghetto by Leah Rudnitsky.

Lichtenberg is planning to launch the “Songs for the Breathing Walls” CD in Prague on Kristallnacht this coming November.

Although Yiddish song is at Lichtenberg’s core, it is clear with the Middle East-influenced “Fray” and her Hebrew prayer project that her transformative experience in Israel is still very much in her heart and showing her the way on her unexpected journey.

Monday Music: From Prague to Masada and Back Again