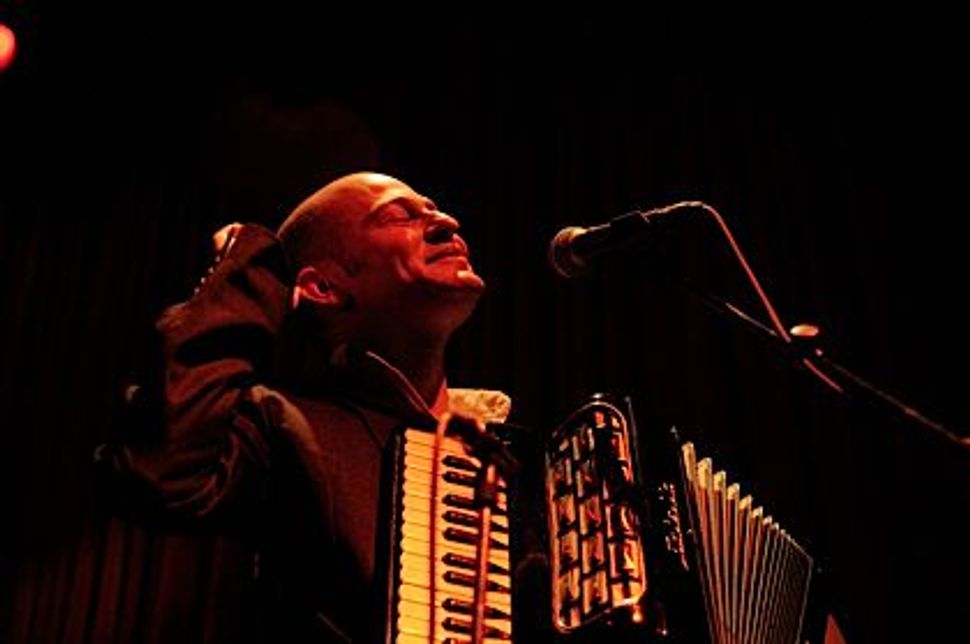 Like many of his klezmer contemporaries, Geoff Berner, the Vancouver-born accordionist and songwriter, has a lyrical flair for pairing social commentary with the comically absurd. And he’s been able to do it with tongue-in-cheek storytelling and a Tom Waits-ian sense of balladry.

Two of his most recent studio releases, “The Wedding Dance of the Widow Bride” (2007) and “Klezmer Mongrels” (2008) featured songs such as “Traitor Bride” (on “Mongrels”) and “The Whiskey” (on “Wedding Dance”), that set Berner’s trademark kookiness against delightfully truncated instrumentation. As a result, Berner has earned a North American and European cult following, a distinction he irreverently addresses on his fifth studio album, “Victory Party,” released in early March.

On the ostentatiously titled “Rabbi Berner Finally Reveals His True Religious Agenda,” he sings, “Everybody’s waiting to know what I’m going to do with my cult following / Where I’m going to take it to go?”

With “Victory Party,” the answer is unclear (for the record, Rabbi Berner’s religious agenda is: “The Bible is a mirror and God is on the other side”). Unlike Berner’s previous outings, which fused traditional Jewish music with folk, punk and ska to create a swaggering neo-klezmer sound, “Victory Party” goes a little off the rails. Berner incorporates one genre too many — really, klezmer and experimental trance are two forms that don’t belong at the same party.

Part of the blame has to fall on Socalled, the klezmer hip-hop artist and fellow Canadian who produced the album. The simplicity of Berner’s usual arrangements — often just an accordion, clarinet, violin and mild percussion — is sacrificed in favor lengthy experimentation. “Oh My Golem,” told from the perspective of the 16th-century Prague rabbi Judah Loew ben Bezalel, who created the legendary superhero, uses a torturous mix of inorganic sounds that seem to crescendo and de-crescendo with disorganized purpose. And rather exciting, Eastern-influenced violin and guitar work on “Wealthy Poet” is undermined by thumping, hip-hop percussion.

To establish flow, hip-hop almost always relies on a 4/4 time signature — the vocals, however spontaneous or improvisational, always follow a simple beat. Klezmer, at least in its 21st-century incarnation, thrives when the music, using additive or mixed meters, seems like it’s on the brink of spinning out of control. On “Victory Party,” Berner seems to be playing with a leash around his neck. To his credit, though, Berner takes the hip-hop influence to heart on “Dalloy Politzei,” a Yiddish translation of the N.W.A. slogan, “F**k tha Police.”

Still, the album has its moments. “Jail” lays out the benefits of going to jail (a new pair of shoes, three meals a day, someone to light your cigarette) and also features nifty clarinet work by Michael Winograd. “Laughing the Jackie the Pimp,” a tender old Yiddish tune, tells the story of a local goon who gets roughed up by even badder dudes (the Russians, who else?).

The album reaches a high point on “Mayn Rue Platz (My Resting Place).” Berner recruits world-renowned Chinese-Canadian erhu player Lan Tung, along with her ethereal voice, to join in on a somber melody about sweatshop life. The song was written by the Yiddish poet Morris Rosenfeld in the early 20th-century and Tung reconstructs three of the original Yiddish verses into a single Mandarin stanza, followed by a haunting, poignant erdu-violin dirge.

That alone may be worth a victory party.