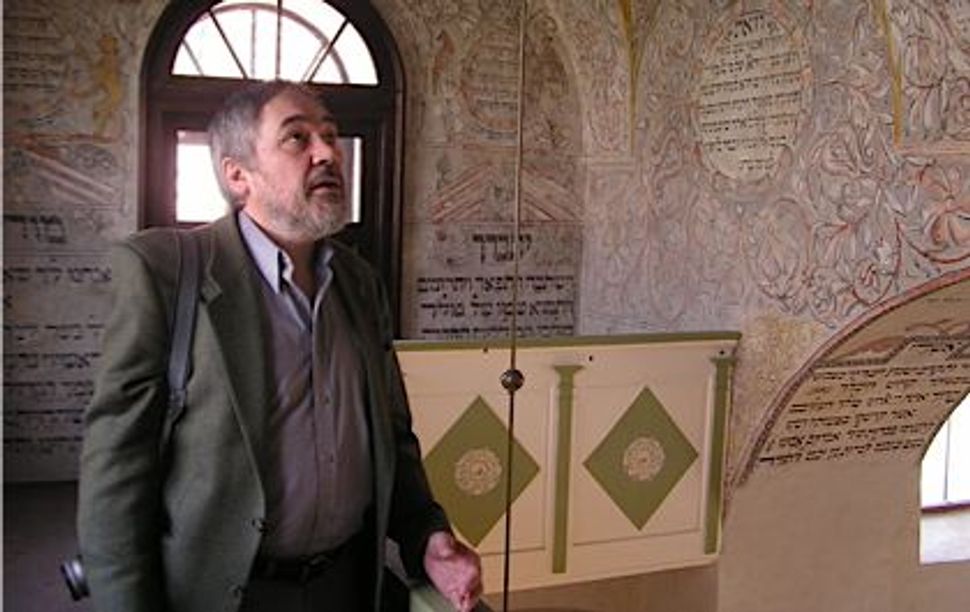 The Jewish Museum in Prague has opened the exhibition “Barokní synagogy v českých zemích” (“Baroque synagogues in Czech Lands”) curated by Arno Pařík. The exhibtion is at the Robert Guttmann Gallery, and will be on view until August 28.

According to Dr. Pařík, “the exhibition seeks to chart in more detail than ever before a group of lesser-known monuments that uniquely reflect the history and culture of the traditional Jewish communities in this country.”

The exhibition presents a selection of the Czech Republic’s oldest synagogues, dating from the 17th and 18th centuries, with particular focus on their plans, designs and decoration. The exhibition also includes many ritual and decorative objects form the Museum collection, including a Star of David, a weather-vane, a stone alms box, a brass lavabo, and a wooden Decalogue (from Roudnice) and other items.

Many synagogues of this period have been destroyed. In an interview published in the Museum Newsletter (2011/1) Pařík says that there were 261 synagogues from the period 1620 to 1780, but that only 63 survive. A large number were destroyed in the Holocaust. In recent years a few of the surviving buildings, such as the synagogues at Boskovice (Moravia) and Jicin (Bohemia) have been restored.

The exhibition includes photograph little known buildings, and significant structures that have been virtually forgotten. Pictures of some of these buildings can be seen online. The splendid restored interiors of other Renaissance and Baroque Czech synagogues such as Kasejovice, Kolin, Holesov and Mikulov can be seen in panoramic views on the website www.synagogues360.org.

According to the museum “The exhibition is intended mainly for specialists (Hebraists, Judaists, historians of art and architecture, preservationists and architects) and for members of the public (including school pupils and university students) who are interested in Jewish culture. Most of the people who see it, however, will be foreign visitors to the Jewish Museum. The show will give them an idea of the cultural wealth of the Jewish communities in the Czech Lands and of the effective care with which this heritage is now being maintained.”

The museum will be publishing a leaflet with information about the exhibition in Czech and English, as well as a catalogue that focuses on selected synagogue buildings as part of the development of synagogue architecture in the Czech Lands.