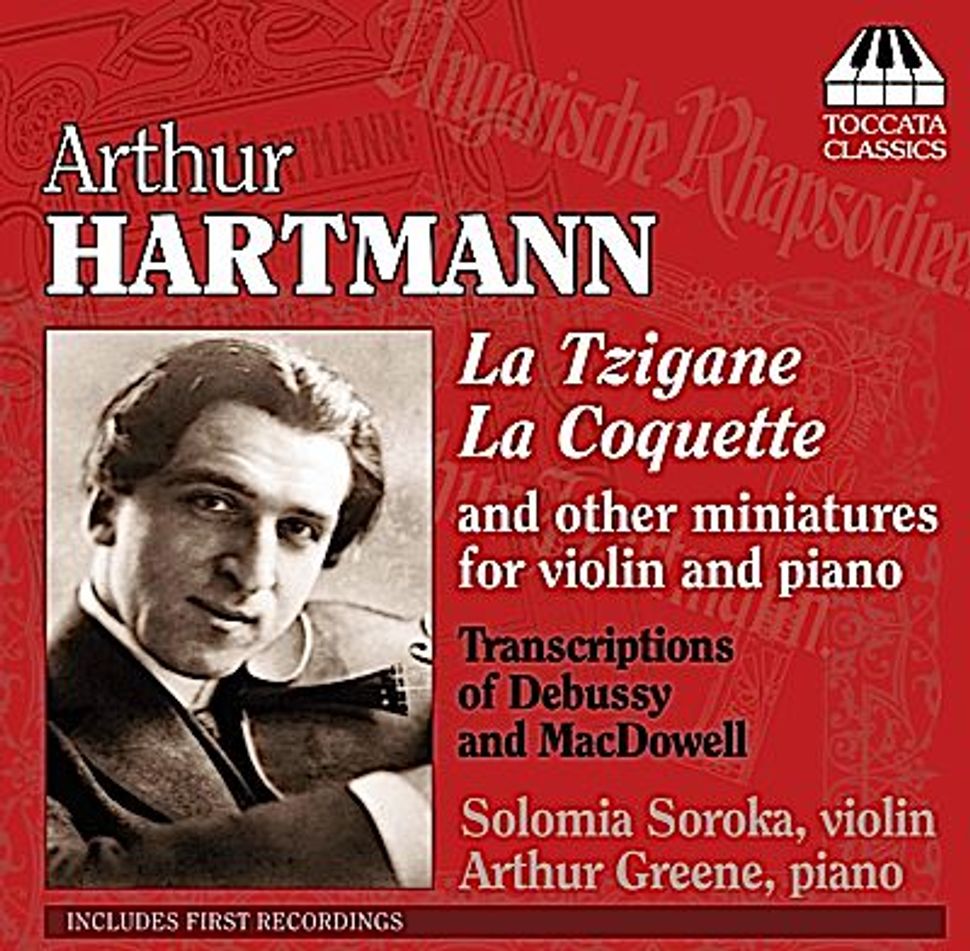 Star violinists are not usually known for modesty, but even in this company, Arthur Hartmann, born in Philadelphia to Hungarian-Jewish immigrants, stands out for braggadocio. Hartmann, who died in 1956, had talent, as we read in “Claude Debussy As I Knew Him and Other Writings of Arthur Hartmann,” a paperback out in September, 2010 from The University of Rochester Press.

While touring internationally, Hartmann wrote transcriptions for his instrument. A CD of Hartmann’s miniaturist compositions was released in 2009 from Toccata Classics, played by violinist Solomia Soroka and pianist Arthur Greene.

Many supreme 20th century Jewish violinists performed and recorded Hartmann’s transcriptions, such as Debussy’s “The Flaxen-Haired Girl” (La fille aux cheveux de lin) as played by Nathan Milstein; Yehudi Menuhin; and others. Yet “Claude Debussy As I Knew Him” contains much cluelessness, notably in Hartmann’s implications that Debussy supported the Norwegian composer Edvard Grieg’s courageous philosemitic stance during the Dreyfus Affair; in fact, in 1903, Debussy attacked Grieg, misquoting the Norwegian’s pro-Dreyfus statements.

On the subject of fellow Jewish violinists who performed his transcriptions, Hartmann appropriately praises Jascha Heifetz, but also attacks the great Fritz Kreisler for trying for “vulgar ‘effect,’ that cheap catch-for-applause,” and jealously calls the major Russian-Jewish violinist Efrem Zimbalist “that shoemaker.”

In 1925, Hartmann writes a letter to Béla Bartók, reprinted in “Claude Debussy As I Knew Him,” asking Bartók if he has heard Ravel’s ultra-glitzy 1924 “Tzigane” inspired by Hungarian tunes, and suggests that Bartók write a similarly “fabulous work” for Hartmann to perform. The idea of Bartók writing a wannabe “Tzigane” is like Anton Webern aping John Philip Sousa. Such vacillating taste may derive from Hartmann’s uncertain self-image; he added an “n” to his family name, Hartman, for exoticism, and claimed to have been born in his father’s hometown, Mátészalka, Hungary, even apologizing to interviewers for his so-called bad English).

A nephew, Mervin Hartman, recalled that Hartmann wore a “Spanish grandee hat set at a rakish angle, and with a cape flowing around him, holding a silver-headed walking-stick. He made quite an entrance.” Despite such often ill-natured posturing, Hartmann showed awareness of his real roots when he based his melody “Danse Grotesque” (included on the Toccata Classics CD) on the klezmer tune “Tantz Tantz Yiddelekh” and requested that Psalm 90 (Lord, you have been our dwelling place throughout all generations) be recited at his 1956 funeral. Hartmann’s still-lively image as a gifted, if obstreperous, gadfly shines on.

Watch Heifetz playing the same work in the 1940s.

Or watch another version of Hartmann’s most famous transcription, performed by the violinist Michael Rabin, of Romanian-Jewish origin.