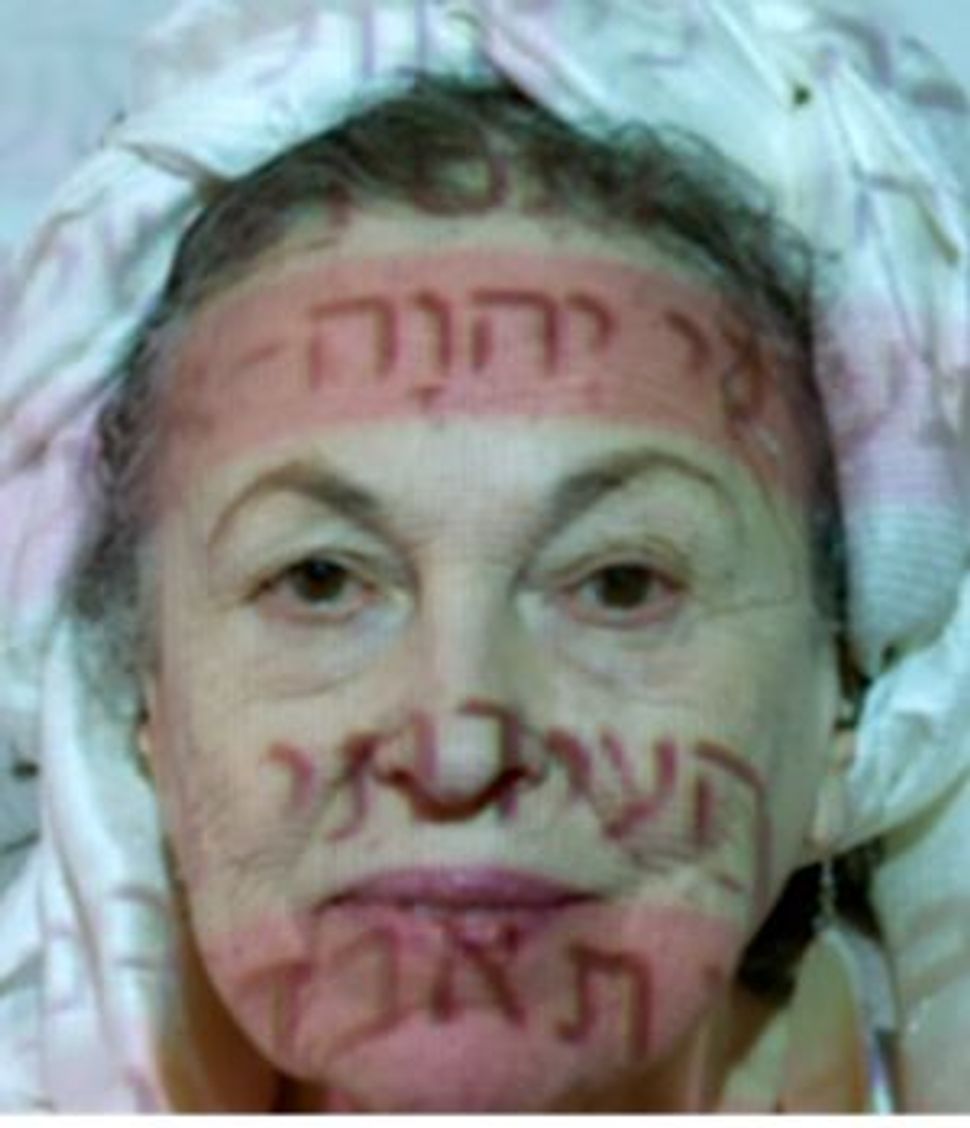 Helène Aylon, ?Self Portrait: The Unmentionable,? 2010

The Pentateuch, or Chumash, is the focus of Aylon’s exhibition “The Liberation of G-d and The Unmentionable,” now on view at Pittsburgh’s Andy Warhol Museum. The show is part of the Warhol’s ongoing series, “The Word of God,” which features art that addresses religion in ways intended to promote understanding between faiths. Aylon’s show follows the series’s controversial first installment, Sandow Birk’s “American Qur’an.” While controversy is also central to Aylon’s exhibition, her approach is more analytical than accusatory. Aylon acknowledges this, dedicating the show, in part, to her fifth grade Hebrew teacher and a female principal, who “encouraged Boro Park girls to question.”

Inquiry may not have been a natural response for Aylon, who grew up in a ritual-driven Orthodox household. In an anthologized conversation with performance artist Linda Montano, Aylon explains that she enjoyed this persistence of ceremony and remembers her grandmother predicting her marriage to a Talmudic scholar. Aylon did indeed wed an Orthodox rabbi, but became a widow at the age of 30. After her husband’s death, she broke from Orthodox tradition to become an artist with feminist leanings. She did not, however, split from her faith. Ironically, Aylon herself became a scholar of holy texts, although not in the traditional sense. For nearly two decades, she has combed through Torah passages, highlighting the conspicuous exclusions and patriarchal language she believes are the result of mankind’s distorted projections of God.

Perhaps to underscore this idea, some of her displayed work is itself a projection. In “The Digital Liberation of G-D” (2004), select passages from the Chumash are projected onto hanging drapery, whose swelling fabric swags cause the text to warp as it scrolls upward. Within the passages, Aylon has highlighted in pink — a distinctly feminine color — excerpts in which she feels God has been spoken for and places where women’s names have been omitted. The highlighting also reveals scornful attitudes towards the feminine. For example, Leviticus 15: 19-30 broaches the subject of female menstruation. Within these 11 lines, the word “unclean” appears 15 times. The repetition, when pointed out, is startling and calls to mind an earlier cataloging of unhygienic animals.

When Aylon works with the actual Torah texts, as she does in the 64 books associated with “The Liberation of G-D” (1990-1996), she does not highlight the text directly, but instead glues parchment to the borders of each page. This serves to cloud the text in some places and enhance the highlighted areas in others. It also prevents the volumes from being closed. Here, it seems, the lesson cannot be avoided by shutting the book or turning the page.

Certainly, Aylon’s work hinges on a progressive, rather than an Orthodox, approach to the Torah. Her concept is wholly dependent on the belief that the Bible is an assemblage of narrative fragments written by a variety of authors, rather than the Word of God directly transcribed by Moses. Yet, with this edited assemblage — with parts possibly composed between the 10th and 6th centuries B.C.E. — comes an antiquated and male-dominated worldview. And here lies the meeting point between Aylon’s mid-’70s feminist principles and her religious education.

While potentially controversial in its upset of ingrained attitudes, Aylon’s examination does not hurl indictments or challenge the sacred. Instead, it lifts human-imposed restrictions, expands our understanding of Divine potential, and thereby increases human acceptance. For an exhibition and an artistic legacy, this is a very worthy goal.