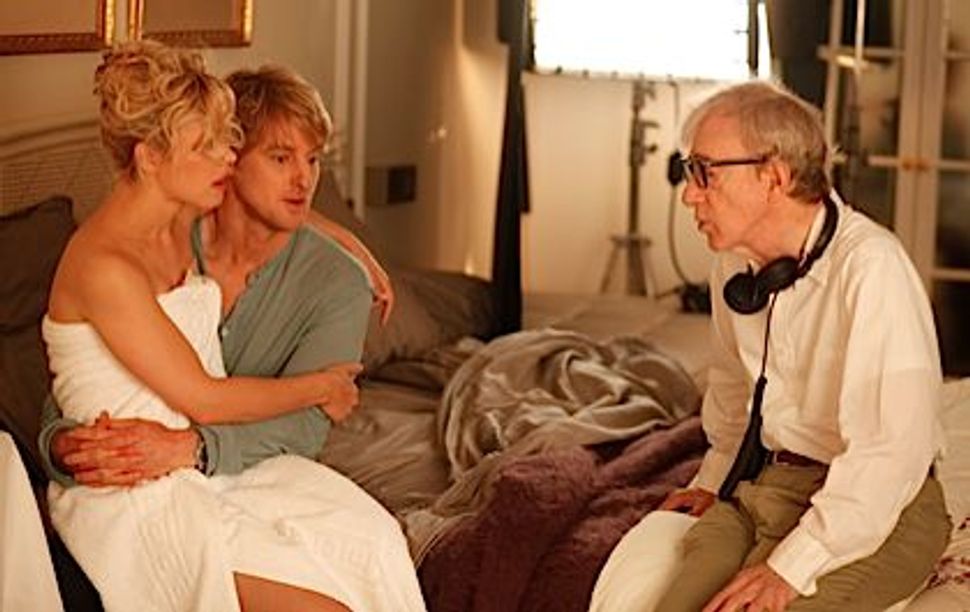 In his new movie, “Midnight in Paris,” Woody Allen did what he does best. He created a character out of a city and added his signature sleight-of-hand magic. Think “The Purple Rose of Cairo,” when a handsome leading man steps through a screen to romance a depression-era Mia Farrow, or “Zelig,” when the title character appears on the nightly news with the Pope and Calvin Coolidge.

“Midnight in Paris,” which premiered at the Cannes International Film Festival earlier this month and opens in limited release May 20, reverberates with that same abracadabra wish fulfillment. “I always feel that only a magical solution can save us,” Allen said in an interview with L.A. Weekly. “The human predicament is so tragic and so awful that, short of an act of magic, we’re doomed.”

The film’s main character (and Allen’s alter ego) is Gill, played by Owen Wilson. A successful American screenwriter filled with nostalgia-fueled musings, he romanticizes Paris the way Allen does Manhattan in many of his other films. Gil idealizes the Roaring ‘20s and he imagines his heroes — F. Scott Fitzgerald, Ernest Hemingway and Gertrude Stein — writing their masterpieces in the City of Light, with Cole Porter’s jazz playing in the background.

Gil is engaged to Inez (Rachel McAdams), an unbearably shallow and domineering brat whose father, Scott (Tom Hiddleston), is a staunch Tea Party-loving Republican snob. While Gil loves getting caught in the rain, Inez shrieks, worrying about her $1,000 shoes. Gil, pretty much a romantic mensch with his head in the clouds, is the opposite. He’s a simple guy who, seeking meaning, gets squirrelly around pretentious wealth — a recurring theme in Allen’s movies.

Fed-up with writing commercial schlock, Gil yearns to write a meaningful novel. This perturbs his fiancée, who wants him to stick with his shtick to keep the big checks rolling in. Inez is such a pain in the tukhes, it’s clear that their only link is an initial infatuation based on sex. But Gil can no more recapture that joy than Alvy Singer could save his relationship in “Annie Hall.” Instead Gil chases after beautiful, vulnerable Ariana (Marion Cotillard), a French muse, but it becomes clear she’s trapped in a mirror enigma — idolizing her golden era, La Belle Époque. Neither can enjoy the present while fixated on the past.

The film’s message — “Be true to yourself or you’ll be miserable” — may seem too on the nose, and postcard shots of Paris too corny, but it all works. “Midnight in Paris” is pure Woody Allen, a genius visible even behind all his doppelgangers.

Watch the trailer for ‘Midnight in Paris’: