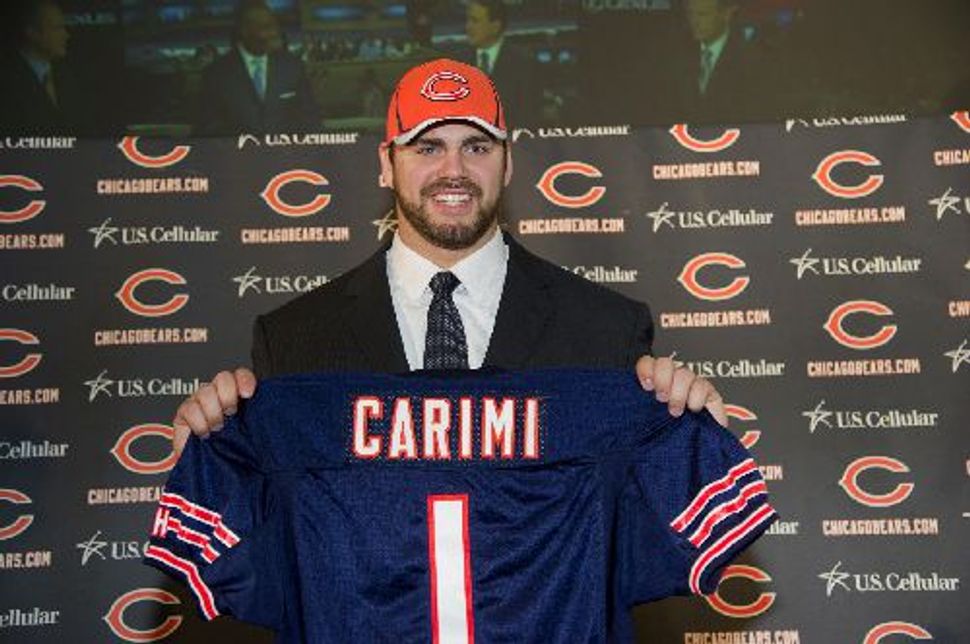 Image by Courtesy of the Chicago Bears

Lisa Bar: Why did you choose the Great Jewish Family Festival as your debut Chicago appearance?

There is not a large Jewish population where you grew up, by any stretch. Did you ever experience anti-Semitism?

In high school, people just did not understand Judaism at all… if I’d hear negative comments and anti-Semitic statements, like ‘That’s so Jewish,” or, “Such a Jew,” I would say: ‘Why would you say that? I’m Jewish.’ I would not ignore the comments. But I believe after people really got to know me, I changed their opinion.

They called you the Jewish Hammer and now, the Bear Jew — a reference to the movie “Inglourious Basterds ” that actually works quite well with your new team. Do you like it?

Yeah, the Hebrew Hammer was taken, so I think this mixes it up a bit.

You’re kind of an intellectual athlete. What do your coaches think about their bookish star athlete?

Not everyone likes a “thinking athlete,” but those who really know me and truly understand what I’m capable of doing know that I give everything to both areas of my life, and accept that’s who I am.

You’re also quite the Jewish public relations package — the star college freshman football player who fasted on the day of a huge game. Was this an instance in which your Judaism directly conflicted with sports?

My Judaism is important to me — I make it work. I fasted on Israeli time, so I could begin my fast earlier, from noon to noon the next day. That way, I was able to be true to my religion and play the best for my team.

Rumor has it that you already checked out the next decade of Yom Kippurs.

Yes! I checked the next 10 years of games on Sunday or Monday, typically when most NFL games are played, and none falls on Yom Kippur — so I’m good to go.

Apparently you are off the Jewish market. All the single Chicago women will definitely be disappointed.