Moving From the Gut at La MaMa Israeli Dance Week 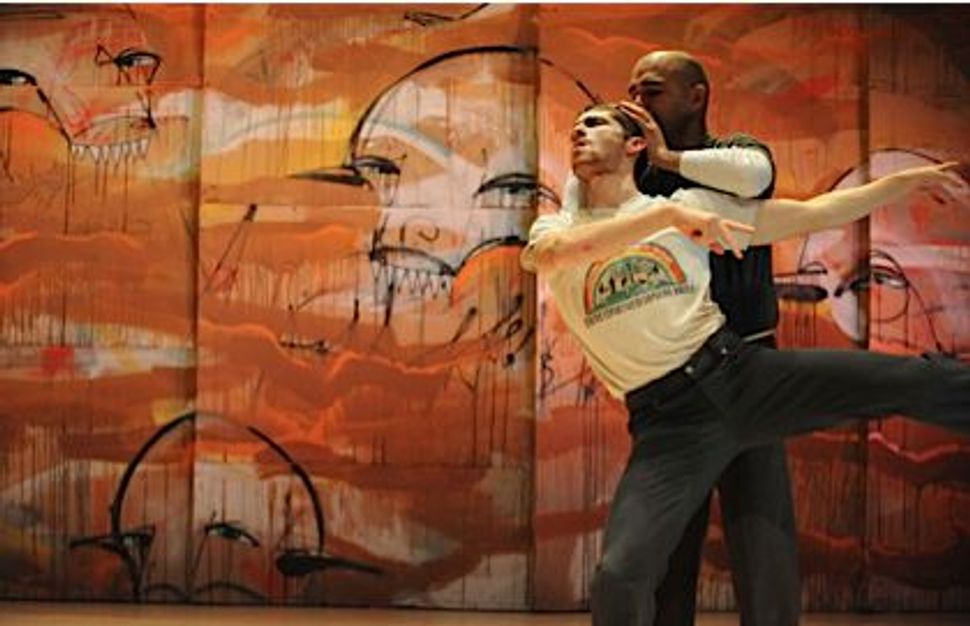 In his welcoming remarks on the opening night of the the La MaMa Moves! Festival’s Contemporary Israeli Dance Week (June 8-12), Edo Ceder, of the New York-based YelleB Dance Ensemble, talked about “dancing from the gut.” That evocative phrase could have been an alternate title for the cumbersomely named festival-within-a-festival, which featured performances from nine different contemporary Israeli dance groups — five based in New York and four brought in from Israel just for the occasion.

I couldn’t help thinking, as I looked at those strong, lean bodies, that dancers don’t really have guts — at least not the flabby kind that we can see. But on that first evening the performers did seem to draw from emotional reserves somewhere deep within themselves. They writhed in agony on the ground; they stood defiantly on their heads; sometimes, they transfixed just by standing still.

The first piece, “Devouring Devouring,” an excerpt from a work in progress by the New York-based choreographer Netta Yerushalmy, began with a tall, thin dancer in blue jeans (Joanna Kotze) walking a brisk clockwise arc around the stage. When she had completed about two-thirds of a full revolution, Kotze carried out a series of precise movements — all elbows and knees jutting out at sharp angles — before collapsing onto her right side with her left leg fully extended, perpendicular to the floor. She repeated this sequence several times throughout the piece, and the familiar pattern began to emerge as a motif that lent structure to the abstract work.

Kotze was joined by two other dancers — Toni Melaas and Jesse Zaritt — and though the three sometimes danced as a trio, they more often divided into various permutations of two-plus-one. In one memorable sequence, Kotze lay prone on her back, slowly stretching her limbs into a series of contortions, with toes and fingers fully extended, as Zaritt feverishly leapt and spun in circles around her. At another point, Zaritt danced alone as Melaas and Kotze looked on, perfectly still except for arms that swung back and forth in limp unison, like clock pendulums.

Movements like these — cold, angular, machine-like — matched Mark degli Antoni’s minimalist score for the piece, which featured vaguely technological sounds repeating in loops. Sometimes, though, Yerushalmy’s choreography suggested an urge to reach past all the mechanized clanging toward genuinely human connections. In one such moment, the three dancers quit jumping and twirling and simply stood in a corner of the dark stage, huddled together in a single pool of light.

Arkadi Zaides’s “Quiet,” the other piece on the opening night program, was considerably less restrained. In fact, doing away with restraint — especially when it comes to expressing difficult emotions about Israel — seems to have been Zaides’s primary goal in creating the work. In the program note, he writes that given the “growing violence and mistrust between communities in Israel… it felt acute to create a platform which allows for an open and honest communication; a place where it is safe to let one’s demons out and set them free.” For his four-man dance ensemble, which includes the choreographer himself, Zaides chose both Jewish and Arab dancers who live in Israel, and he writes that his “creative process was nourished” by the performers’ differing “social realities and artistic backgrounds.”

“Quiet” opened with the four men seemingly asleep on the floor as sounds of waves played in the background. Sinister-looking birds — cardboard cutouts affixed to wooden sticks — seemed to gaze down at the sleeping forms. It all suggested a bleak beachscape, or, perhaps, the inner landscape of the subconscious.

Zaides writes that “Quiet” is meant to explore aggression, compassion, confusion and yearning, and yet for all its emotional intensity, I could never quite tell which state was which. The four men pushed toward each other with outstretched arms; punched and kicked at the air; curled into shoulder-stands, and paired off as though about to fight or embrace. One dancer, Rabie Khoury, who periodically startled the crowd with short, wordless yawps (of frustration?) emerged as a kind of instigator. In one uncomfortably long section, he stumbled about the stage laughing heartily while the other dancers remained in fixed poses. Later, Khoury dragged Ofir Yudilevitch around by his head, cupped his hands against the back of Yudilevitch’s skull, and seemed to whisper directly into his brain. This was without a doubt the most disturbing image of the work. The most exciting part to watch came late in the performance, when Tom Tlalim’s previously subdued score kicked into a driving drum groove and all four dancers began to dance-fight with energetic, capoeira-like kicks and leaps.

Yudilevitch was the most acrobatic of the group, and he drew the evening’s only audible gasp from the audience when he plunked the top of his head down onto the hard ground, lifted himself into a headstand, and then spun around on his head like a top.

Between the two live dance performances was a palate cleanser of sorts — a series of four short films created as collaborations between Tel Aviv-based dancers, cameramen, editors, and animators. (The films were also repeated at each of the festival’s subsequent performances.) Of these, my favorite was Gaya Be’er Gorovich’s “Let’s Drink for Life,” in which Gorovich, dressed in red, becomes increasingly frantic as she dances to the first aria from Verdi’s “La Traviata.” It was a relief to see (and hear) something that felt whimsical and light-hearted compared to the evening’s longer and more serious works.

That isn’t to suggest that this was a particularly somber affair; participants and audience members alike seemed to buzz with excitement over the start of the festival. And, as an added bonus, Richard Cohen’s spirited clarinet-playing in the lobby before the performance and at the intermission — a mix of klezmer-inspired fragments and spirited jazz riffs — contributed both to a festive mood and to a pleasant sense of geographical confusion. Were we in Tel Aviv, New York, Paris or somewhere in between? Amidst the lively conversations in the lobby and the provocative contemporary works onstage, it hardly seemed to matter.

Moving From the Gut at La MaMa Israeli Dance Week