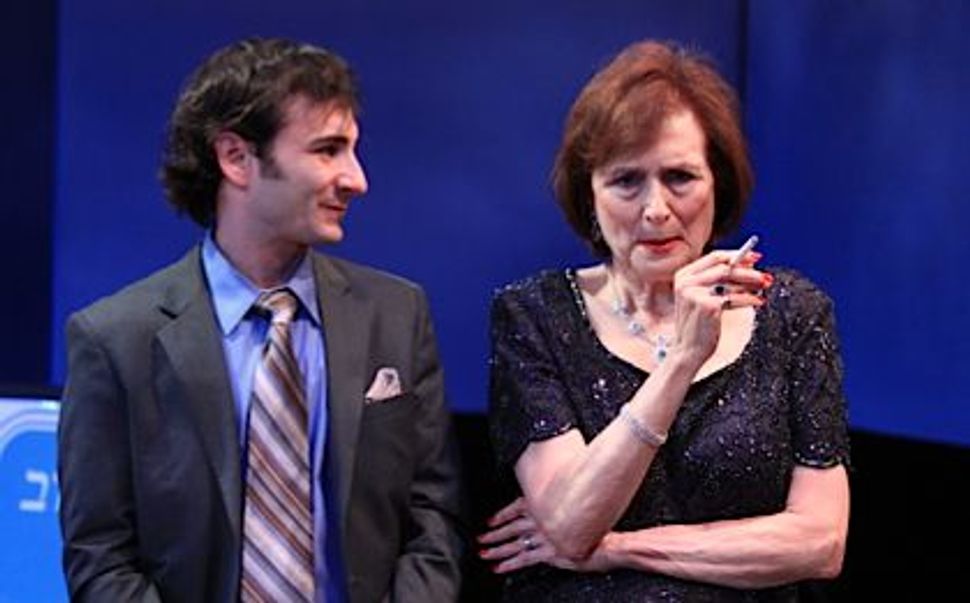 Weddings are the best. There is food, drink, music, organized dancing, and cake. What could be better? My favorite part of any wedding is watching the old and new generations interact. Nothing is more priceless than the look on my grandmother’s face when Sir Mix-a-Lot’s “Baby Got Back” starts pumping through the speakers. There is always a bit of embarrassment, mixed with half-hearted disapproval, and ultimately an understanding that this is, after all, her grandchild’s special day, and whether or not the groom is currently shirtless is really none of her concern.

The wedding in question is more of a somber affair in David Zellnik’s “For Elise,” playing until June 25 as part of Ensemble Studio Theatre’s “Marathon 2011” one-act play series. Here we see, huddled in the parking lot, Elise (Delphi Harrington), the matriarch of a large Jewish family. Stumbling out into the night is her great-nephew Donny (Erik Lieberman), a young gay man sneaking cigarettes, trying to make it through his cousin’s wedding reception.

Elise has been drawn away from the party by something much more disconcerting than a hip-hop song. Her favorite grandson Joshua (the groom, Drew Hirshfield) has converted to Hasidism and Elise cannot bear the thought of such an extreme lifestyle for someone she knows to be so excitable and vivacious.

Donny also feels discomfort at his cousin’s transformation. The two were adventurous young men together, and he had hoped that they would remain close. But he fears their clashing lifestyles will render that impossible.

All this comes to a head as Elise and Donny begin talking. This is also where Zellnik’s script begins to lose focus, however. The two characters pass through a great many subjects and emotions in their brief exchange: Elise’s prejudice against homosexuals, Donny’s former crush on his cousin, Elise’s experience in Czechoslovakia during the war, Donny’s upcoming marriage to his boyfriend, and so on. Any of these subjects could merit their own piece, but scrambled together in a somewhat disjointed conversation, the audience isn’t sure which of them to care about most.

Ultimately, it is Josh’s conversion that has both characters the most rattled. Elise refers to the Hasidic wedding guests as “ghosts.” “I recognize them. They are my parents’ parents,” she says.

Here, it seems, is the key to the story — the evolution from one generation into the next. Donny feels the distance between him and his aunt; she is a relic of the old world that must be respected, whose prejudices and intolerance should be chalked up to a life of hardship. Elise herself, however, feels young, progressive and alienated by the old world dancing inside the hall, men and women on opposite sides of the barrier.

It is a portrait not often painted these days. Typically, the elders are the makers, and the youth are the breakers. However, Zellnik shows us that this is a cycle that never ends, and that it may even begin again. Old can become young, and young old again. Generations age and take their values with them.

Who knows — perhaps some day I too will dance to Lady Gaga at my granddaughter’s wedding, while she sits and wonders how I could possibly be so out of touch.