Traveling the Length and Breadth of ‘Yiddishland’ 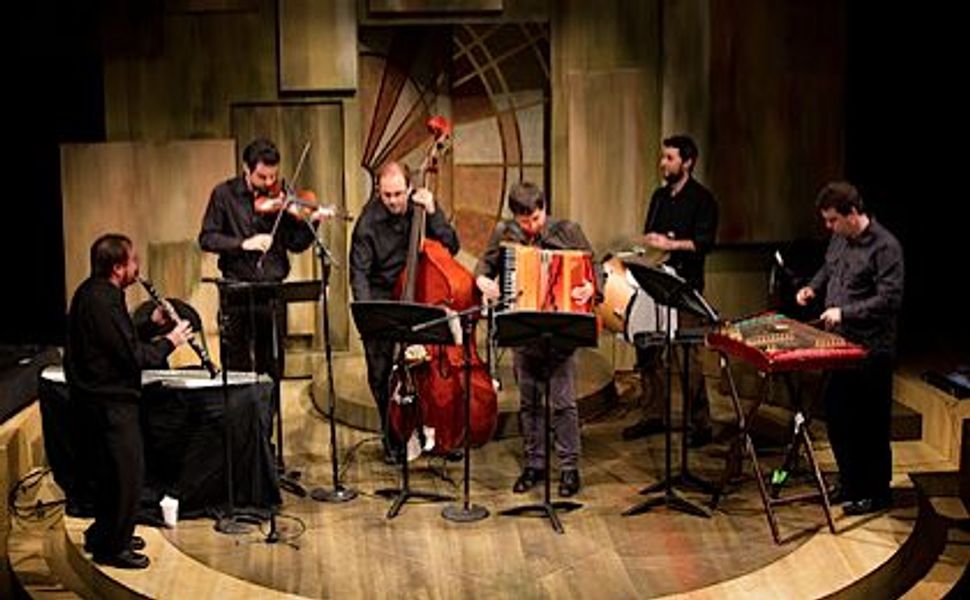 In his 2006 study “Adventures in Yiddishland: Postvernacular Language and Culture,” Rutgers University professor Jeffrey Shandler noted the strange phenomenon in which musicians have become some of the most well-known authorities on Yiddish culture. “Marginal figures in East European Jewish society before World War II, klezmorim are now prominent cultural spokespeople, enacting representations of that society on stages around the world.”

However one feels about the primacy of music over the language itself in much contemporary Yiddish culture, there is no doubt that klezmorim are doing a great job, not just playing music, but also conducting ethnographic research into a folk repertoire that goes well beyond the Yiddish theater chestnuts and art songs of the early 20th century. On June 13, at New York’s Baruch College Perfoming Arts Center, musician, composer, arranger and bandleader Dmitri “Zisl” Slepovitch premiered a collection of just such material in a program titled “Traveling the Yiddishland,” the result of some 10 years researching Yiddish songs in Belarus and other parts of the Former Soviet Union with the late Jewish music scholar Nina (Nechama) Stepanskaya.

Presented by the National Yiddish Theater Folksbiene as part of their free concert series at the City University of New York, “Traveling the Yiddishland” is a continuation of Slepovitch’s work with his band, Minsker Kapelye, and their 2009 album “Tutejsi” (“Di Ortike / The Locals”). As on that album, the current production explores lesser-known folk songs, klezmer tunes and political anthems from Belarus and Lithuania. Slepovitch’s band for this project, Tamevate Kapelye, features first-rate musicians such as Craig Judelman on violin, Joshua Camp on accordion, Sam Weisenberg on drum, Dmitry Ishenko on bass, and the inestimable Pete Rushefsky on cimbalom. In “Traveling the Yiddishland,” however, Slepovitch goes beyond musical performance to include multimedia elements such as video field recordings, as well as a more grandiose conceptual packaging presenting the undertaking as the continuation of an Eastern European “Yiddishland” and its recreation through recording and performance.

While the high-concept framing set the bar for the evening somewhat higher than it needed to be, the show’s multi-media component was both effective and well executed. Videos projected on a large screen above the stage showed elderly residents of the Former Soviet Union discussing their memories of Jewish music from before World War II, and in many cases singing songs they remembered from that time. These clips were particularly moving — many of the interviewees were capable singers, and their living-room performances were captured with high quality recording equipment. Thus, as the band played along with the singers, there was almost no discordance between the live and the recorded elements, creating the bridge in space and time that had been promised by Slepovitch’s introduction.

While many of the works performed were folk songs of a familiar character, others illuminated aspects of Yiddish musical history that are often overlooked. One elderly interviewee offered renditions of pre-war Zionist songs in Yiddish, as well as an alternate version of “Hatikvah.” Another subject of Slepovitch’s research performed a Communist youth song. Such numbers illustrate the wide political and cultural breadth of Yiddish, even in a relatively small geographic area and a short period of time. By bringing together and presenting such diverse materials, Slepovitch’s project illustrates that “Traveling the Yiddishland” is a long and fascinating journey, and not just a single stop.

Traveling the Length and Breadth of ‘Yiddishland’