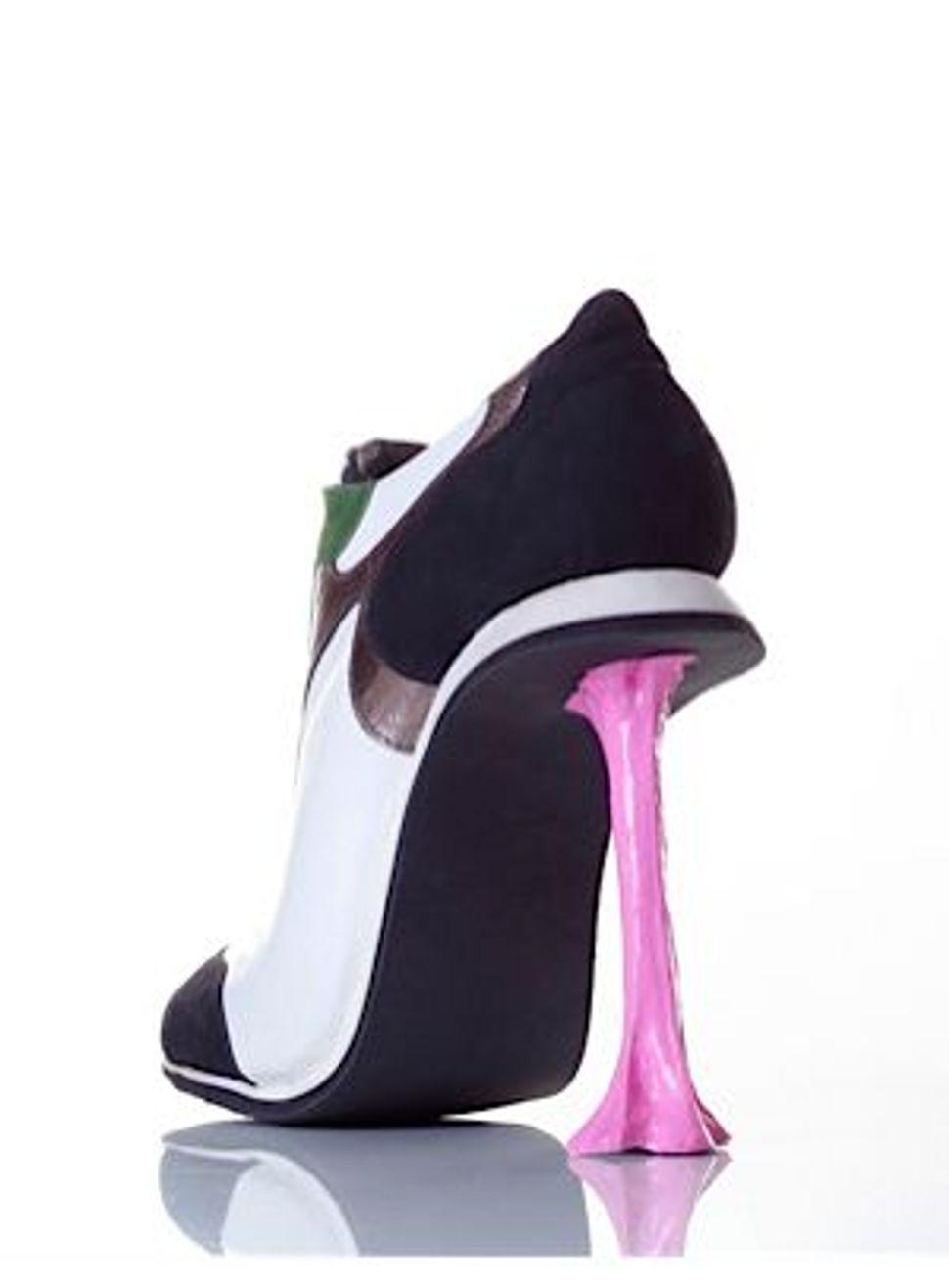 ?Chewing Gum? by Kobi Levi. Image Courtesy of the artist.

High heels are a great way of attracting attention — think of Carrie Bradshaw teetering on vertiginous Manolo Blahniks in “Sex and the City.” But even she might have balked at slipping on one of Kobi Levi’s more imaginative designs. There’s “Chewing Gum,” for instance, capturing the moment just after the wearer has “stepped” in a wad of gum, or “Mother and Daughter,” a cute and whimsical observation on that most basic — and complicated — of relationships. On the other hand, there’s “Blow,” which resembles a blow-up doll apparently engaged in the act of… I’ll skip the details, in deference to readers of more sensitive dispositions.

But for all this, Kobi Levi’s unique designs are not about attracting attention; rather, it is all about creative expression and enjoyment. “People should enjoy what they wear,” he insists. One-off prototypes, the designs are perhaps something of a foil for his conventional work as a professional shoe designer with a respected international portfolio.

“I’ve always been fascinated by shoes, not as a product but rather by the shape, the form,” Levi told me over coffee near his studio in central Tel Aviv. “Shoes are like sculpture, with a life form of their own, but you can also wear them.” His goal, he said, is to create a hybrid that encompasses both image and purpose. The design prototypes — outlandish as they may seem — are fully functional and wearable. “I can see a shoe in a museum, in a showcase glass box; but I also want to be able to visualize them on someone’s feet. I want to think of them live, current, relevant.”

Levi says that he has always been fascinated by the form of the shoe, and recalls “somehow footwear (finding) a place in everything,” during high school art classes. A degree in Jewelry and Accessories Design at Jerusalem’s Bezalel Academy of Arts and Design followed; he had considered the “more practical” option of graphic design, “but my heart was in shoe design.”

Not that he needed to worry. Soon after graduation, he was approached by American entrepreneur Mark Klein to work on a design for an interchangeable footwear project. The concept Levi came up with was “Skin,” a shoe in two parts — an inner “bone,” and interchangeable outer layers, or “skin.” Though the project was successful, the financial crash of 2008 led to the premature end of the collaboration. Presently, Levi is working on a women’s line for the Israeli chain Shufla Banot.

Meanwhile, Levi has continued working on his private passion. Though he made his first prototype as far back as 1998, he never intended them as anything more than a creative outlet. Working on them, Levi explained, gave him the opportunity to “free myself from all restrictions other than the design itself.” Each shoe starts with a two dimensional conceptualization, which he then builds if the design shows promise. The actual construction of a single pair takes a month, with Levi doing all of the tooling work himself.

It’s likely that the designs would have remained just a private passion if Levi had not decided to create a blog, kobilevidesign.blogspot.com, to post pictures of the designs. Self-promotion was not the driving force — “I started the blog just as a means for easy accessibility,” he explained — but the designs quickly went viral, and have since been featured across a range of websites including Boing Boing and CNN.com.

Levi likens the relationship between the design prototypes and his commercial designs to that between Haute Couture and Ready-to-Wear design, the one feeding off the other and ultimately providing inspiration — albeit in a muted form — for the fashion of the day. A pair of Levi’s shoes were recently featured in Lady Gaga’s video for “Born This Way.” Who knows — shoes inspired by his inventive designs may soon be in a shopping mall near you.