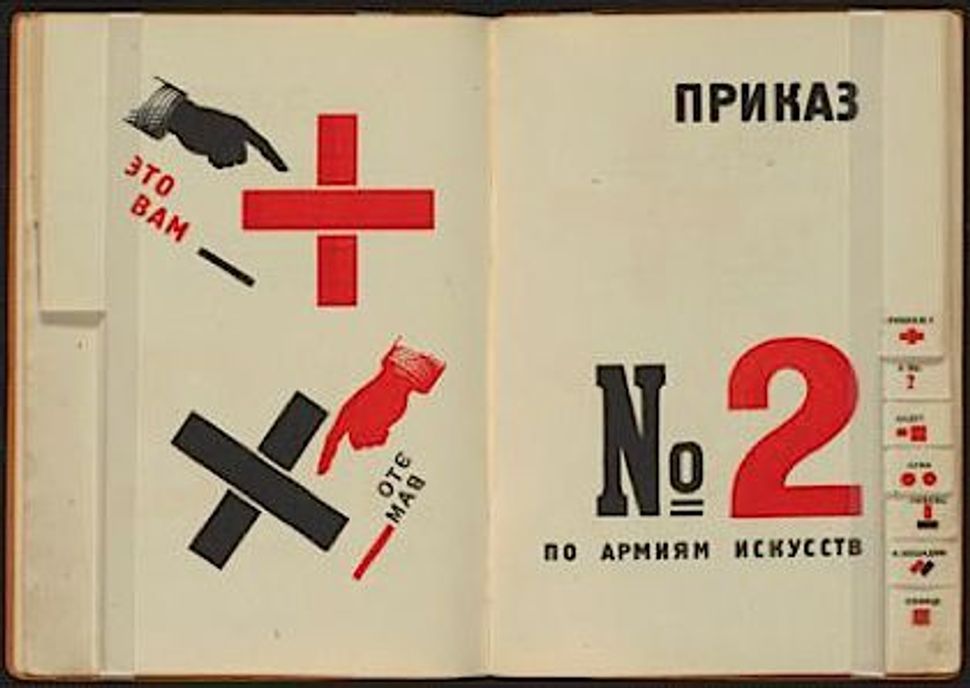 “Record” is a tiny work of art, measuring no more than a few inches in either direction. But the photographic print, created by the Russian Jewish artist El Lissitzky in 1926, may be the signature piece in “Avant-Garde Art in Everyday Life,” a new exhibit that opened in June at the Art Institute of Chicago.

The exhibit, nestled in the Art Institute’s impressive new Modern Wing, features the work of six European artists — John Heartfield, Gustav Klutsis, Ladislav Sutnar, Karel Teige and Piet Zwart, in addition to Lissitzky — who brought an avant-garde aesthetic to everyday objects during the interwar period. It’s a bit heavy on propaganda art — a few too many red-and-gray Soviet posters line the walls — but the exhibit is otherwise clever and well designed. Sutnar’s cover designs for Czech editions of George Bernard Shaw plays sit opposite Zwart’s funky translucent-green teapots. It works.

Among the flatware and magazine covers, however, “Record” — or “Runner in the City,” as it is alternatively titled — stands out. The little print features a lithe runner in mid-leap on a track, skimming the top of a hurdle with his dark hair flowing behind him. The image is superimposed over the glaring lights of New York’s theater district, creating an impression of the athlete striving against the world. The resulting image is powerful and a bit surreal, with Lissitzky managing to to capture in it both the fear and the optimism of Europe in the interwar period. Originally intended as a monumental frieze for Moscow’s never-built Red Stadium, the print’s scale in the exhibit feels a bit ironic.

Trained in Germany and Russia, Lissitzky worked in a variety of media, and the exhibit reflects the breadth of his artwork. “Cloud Hanger,” a crayon-and-pencil sketch from the mid-1920s, depicts two boxy, T-shaped skyscrapers that Lissitzky envisioned as a “flying city” ringing the edges of Moscow. His design for “For the Voice,” a book of poems by the Russian writer Vladimir Mayakovsky, features “a thumb index modeled on common address books,” with each poem given a tab emblazoned with a tiny symbol. Even the artist’s design for a brightly colored package of sealing wax makes an appearance.

“Avant-Garde Art in Everyday Life” doesn’t mention Lissitzky’s Judaism, which is neither problematic nor entirely surprising. Though in the earlier part of his career he illustrated Yiddish children’s books and made artworks that included Hebrew letters, the Art Institute’s exhibit focuses on a slightly later period, by which time his art had turned more secular.

But the exhibit’s curators could have done a better job of situating Lissitzky’s art — and the work of the other featured artists — against the menacing times during which much of it was created. Heartfield, for instance, Anglicized his German birth name during the First World War to protest his government’s nationalism, and fled Germany for Prague in 1933. Sutnar left Hitler’s Czechoslovakia for New York six years later. Though Lissitzky largely escaped persecution before dying of tuberculosis in 1941, I’d imagine the plight of German Jewry during the ‘30s might have influenced his art as well.

“Record,” with its lone runner hurdling modernity, reflects the tumult of the avant-garde age, and the Art Institute could have tied it a bit more explicitly to the events upending everyday life for many during the 1930s. But this is a minor quibble. Overall, the Art Institute’s exhibit succeeds in spotlighting the surprising manifestations of the avant-garde movement in Europe’s precarious interwar years.