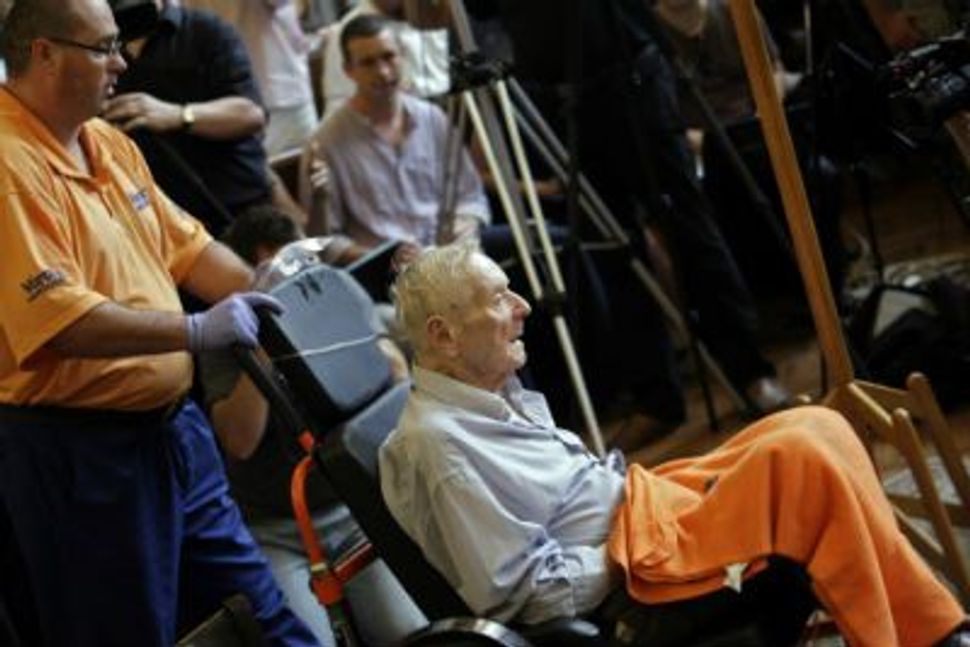 A sickly, wheelchair-bound nonagenarian who sat in court Monday covered in a blanket and hooked up to an IV was acquitted of Holocaust-era crimes. The scene sounds familiar, but it wasn’t John Demjanjuk on trial again.

In this latest attempt to bring World War II criminals to justice, 97-year-old former Hungarian police captain Sandor Kepiro was tried in a Budapest court and found not-guilty of having taken part in the murder of more than 1,000 Jewish and Serbian civilians in the Novi Sad massacre in northern Serbia in January 1942.

Kepiro, who maintained his innocence throughout, was exonerated on the basis of his defense team’s success in discrediting the witnesses’ accounts of what took place almost 70 years ago. The prosecutors claimed that Kepiro had ordered the round-up and murder of civilians, most of whom were Jews.

The former police unit commander had been found guilty of the same crime by a Hungarian court in 1944. Although he was sentenced to ten years in prison, the fascist Hungarian regime allied with Nazi Germany delayed his imprisonment, and he managed to escape to Argentina after the war.

The Simon Weisenthal Center discovered Kepiro’s whereabouts in 2006, a decade after he had returned to Hungary. This trial was considered by the Weisenthal Center to be one of the last chances — if not the final opportunity — to bring Nazi war criminals to justice, and the verdict came as a big disappointment to many. Alexander Nesakr, chairman of the Jewish community in Serbia, also expressed dismay, but said that he was not surprised, given that Hungary is “a state in which a pro-fascist party has won many votes, and where there is evidence of a strengthening of neo-Nazism.”

Upon the reading of the verdict, the frail Kepiro declared, with the help of an attendant nurse, “I am innocent. I never killed nor stole. I served my country. I returned to it because for me there is no life outside of Hungary.”

For the more than 1,000 people murdered at Novi Sad, there was no more life at all. And it appears that time has run out for justice for them, as well.