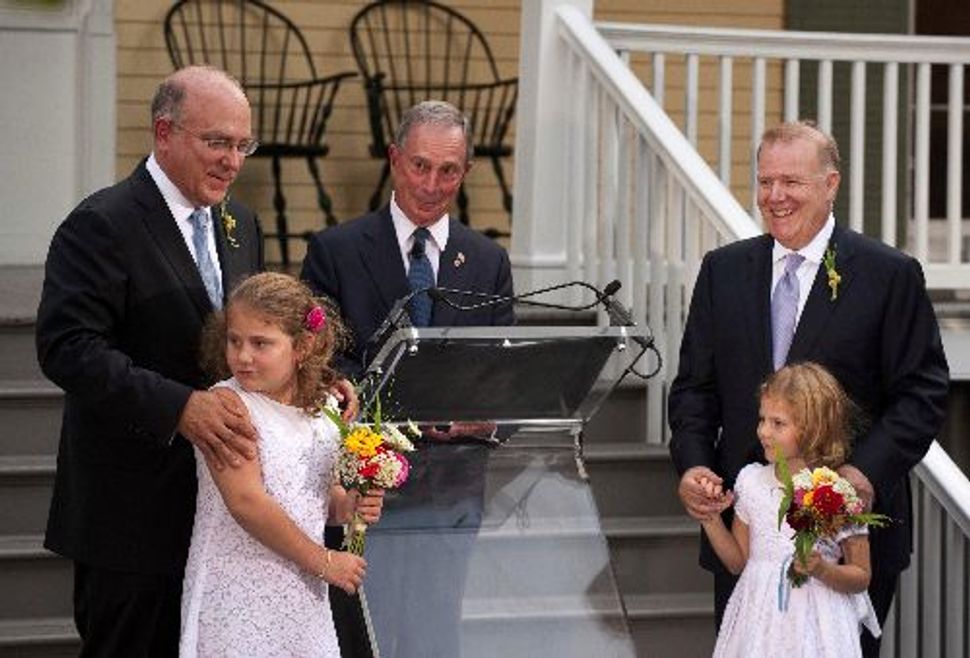 New York’s weekend of marriage equality launched with a joyous Jewish twist. Mayor Michael Bloomberg last night officiated at the wedding of two Semitic members of his staff at a Gracie Mansion ceremony.

Consumer Affairs Commissioner Jonathan Mintz and Criminal Justice Coordinator John Feinblatt tied the knot after being together for 14 years, according to CBS2. Their daughters Maeve, 8, and Georgia, 6, were witnesses and ring bearers.

Mintz and Feinblatt “exchanged rings, broke glasses in the Jewish tradition and had ‘eco-friendly’ confetti thrown at them, the report said. Even though they’re a long-time committed couple with kids, they said the ceremony seemed to change things. “Things are different. Everybody’s gathering around and telling you they love you and your family is getting to say things they were never able to say before because we could never do this before,” Mintz told CBS2’s Marcia Kramer.

“Mayoral aides refused to say what the mayor was giving the happy couple as a wedding present. One thing he didn’t give them is a day off,” CBS2 said. “They have to be back at work Monday morning bright and early.”

The first female couple married under the new laws, Phyllis Siegel and Connie Kopelov, were dubbed “New York City’s first couple of same-sex marriage.” by the New York Post. “Gals, 85 & 77, make history as ‘1st’ ladies,” declared the Post’s headline. The pair had been together 23 years before finally tying the knot, the Post said. “Siegel, a retired bookkeeper, and Kopelov, a onetime labor activist, both wore white pants and blue shirts for their ceremony — the Big Apple’s first same-sex nuptials,” the Post said.