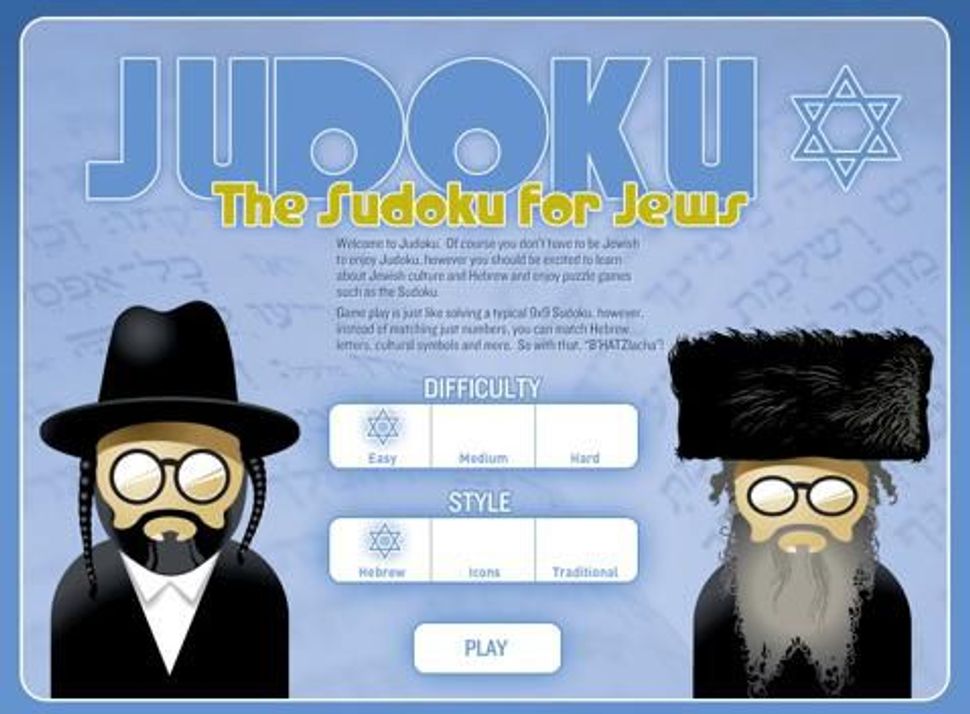 “Oy Vey! Is this a mishuga game or what!” That’s the reaction game developer Andrew Charon hopes you’ll have, at least.

Charon is the mastermind behind Judoku, a Jewish-themed version of the popular Sudoku puzzle. Instead of simply lining up the numbers one through nine in that familiar 81-cell matrix, puzzle-doers can choose to arrange Hebrew letters or Jewish symbols instead.

Judoku is available from the Mac App Store for $1.99. Its distinct and mildly irreverent icon — a cartoon man with peyes and black hat — is in keeping with the lighthearted spirit of the game.

Charon promises all users a good time, regardless of religious origin, claiming, “Not Jewish? Don’t worry, you’ll still have fun with this unique and educational puzzle game — or our name isn’t ACME Digital Goldstein Laboratories. (OK…that’s not our name, but it sounded good didn’t it?)”

Judoku comes with the standard easy, medium and hard levels, but this version of Sudoku might not be as frustrating as the original. As Charon points out, “When’s the last time you found yourself saying, ‘I just can’t figure out if I should put a menorah or a torah in that corner cell?’”

Still, the game comes with time tracking and error checking capabilities, just in case. Its website wishes players a “mazel tov!” and cajoles:

“C’mon, what do you have to lose? You might even learn a thing or two about Judaism (or at least as much as you could expect to learn from a Sudoku game. I mean…we’re not Moses).”