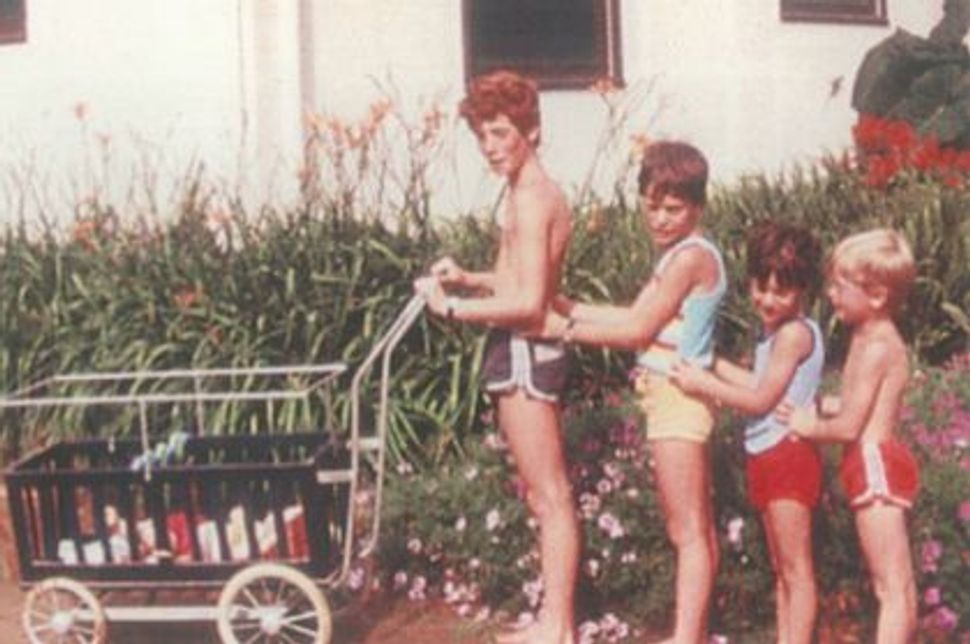 The film is a bit over-long, and drags at times, but is otherwise beautifully made. Each shot — of brothers’ faces, soldiers, male posteriors — is imbued with a feeling of intimacy and almost prurient tenderness. The colors, especially those of the older footage, have a kind of jewel-toned fuzziness that can’t help but summon nostalgia. Yet Heymann’s focus is always on the mobile present of this family, one remarkable mostly for being — like most families — a source of both pain and comfort.

The film does have something interesting to say, certainly, about the changing face of the Israeli Zionist family, especially in the context of country’s political turmoil and its effect on more liberal youth. Heymann — who opposes the increasingly conservative Israeli government — studs his film with footage from protests, police crackdowns, and suicide bombings. As violence increases, the relation to homeland changes for Heymann and his brothers, some of whom leave the country for America. How to love Israel and yet be critical of it — as Heymann is — is one of the many questions at the heart of the film. Still, politics never comes to dominate the personal. At most, it sits behind the home video footage as a contextual backdrop to the family’s disintegration.

Turning the camera on himself (sometimes to the point of self-involvement: succumbing to one of the clichés of this genre, the filmmaker is occasionally seen naked in the mirror), Heymann also brings his own sexuality into play, lingering over his relationship with a young man who eventually leaves him, and creating a filmic catalogue of his one night stands. It’s clear that being gay contributes to Heymann’s sense of rootlessness, as he tries to find a home in Israel — he’s forced out of one building in Jaffa when neighbors destroy his car — while seeing points of connection to the gay community.

A gay Lebanese-American tells Heymann that he feels there is more in common between the two of them than there is between himself and other Americans, let alone other Arabs. That gayness, as identity, can overpower other forms of self-identification is a bittersweet realization. To be a citizen of the gay community, Heymann cannot be, fully, an Israeli Jew in the way his family expects. Despite his family’s acceptance of his sexual orientation, there are moments of tension. Erez, Heymann’s twin, tells him half-jokingly: “you are extinction — biologically, you’re useless.” At the first PRIDE Parade in Jerusalem, in which Heymann decides to march when he hears that conservative religious groups will protest, his camera finds a more poisonous source of anti-gay vitriol. One Orthodox woman shouts out that the gays are “worse than Nazis.” Largely though, the film is remarkable for the lack of fuss put up by his family when Heymann comes out to them, and gay politics plays only a supporting role to the intimate dissection of family.

Throughout the film, Heymann’s four brothers depart one by one for the United States, leaving their divorced mother, Noa, disconsolate over what she sees as their choice of self over family. Though she’s a model of acceptance when it comes to Tomer’s sexuality, Noa struggles with what she perceives as selfishness on the part of her sons, including Tomer himself, who, being gay, will not produce grandchildren. (An adorably solemn little nephew sums up, repeatedly spouting the platitude: “In my belief, every generation must have children.”)

Though the film specifically addresses these questions in the light of the family’s Zionist values, there is space for anyone to see themselves reflected in the tug-of-war between family, community and self-expression. It is an achievement that, in a film investigating broad questions of identity — Jewish, gay, Israeli, and male, for a start — Heymann is able to give us characters who are above all human.

Watch the trailer for ‘The Queen Has No Crown’: