The Lions of Zion, Chapter Three 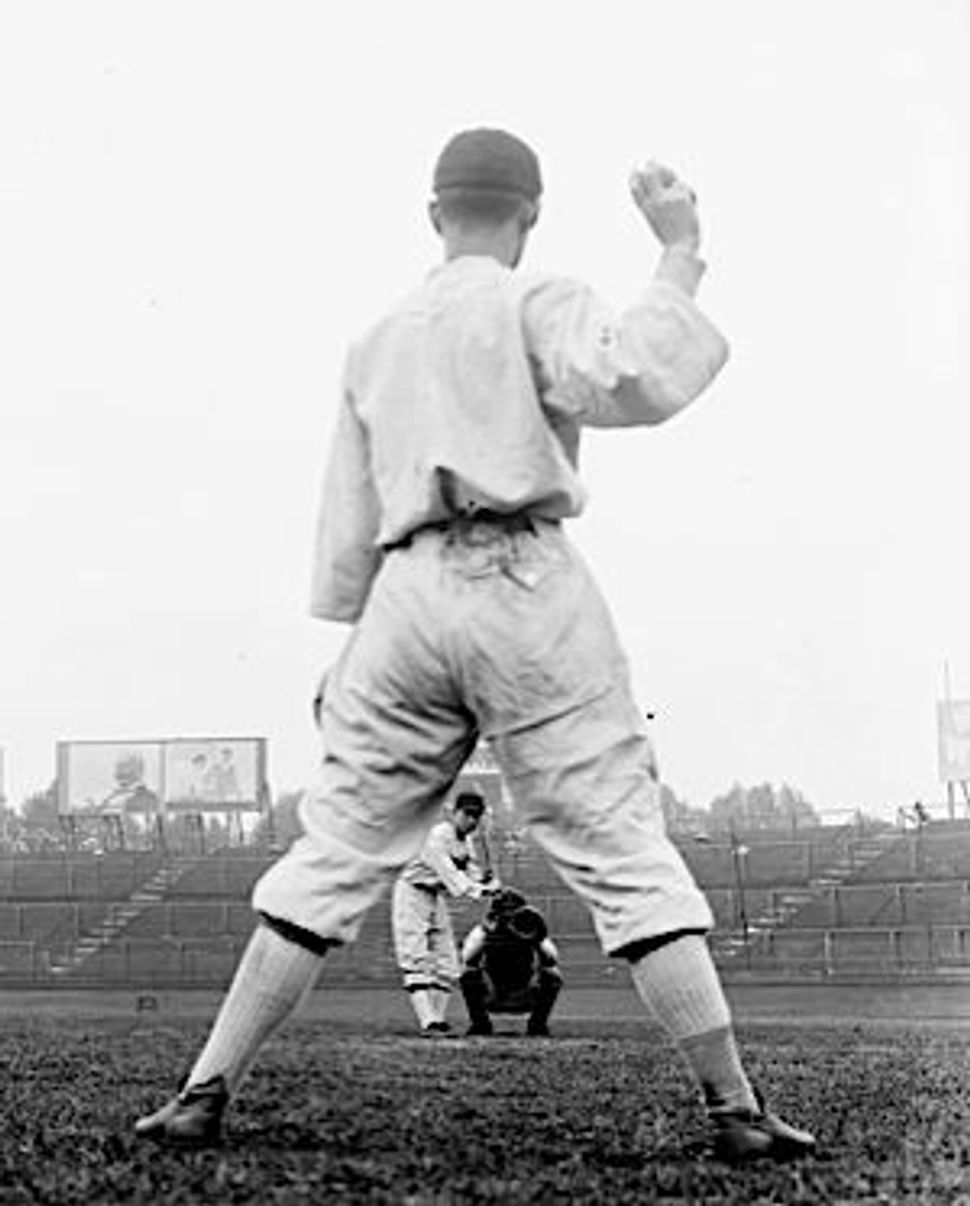 What would have happened had there been a Jewish team in the Major Leagues? In an original novel serialized on The Arty Semite, Ross Ufberg imagines the trials and triumphs of The Lions of Zion, an all-Jewish team competing in the National League in 1933. Read the first two chapters here. 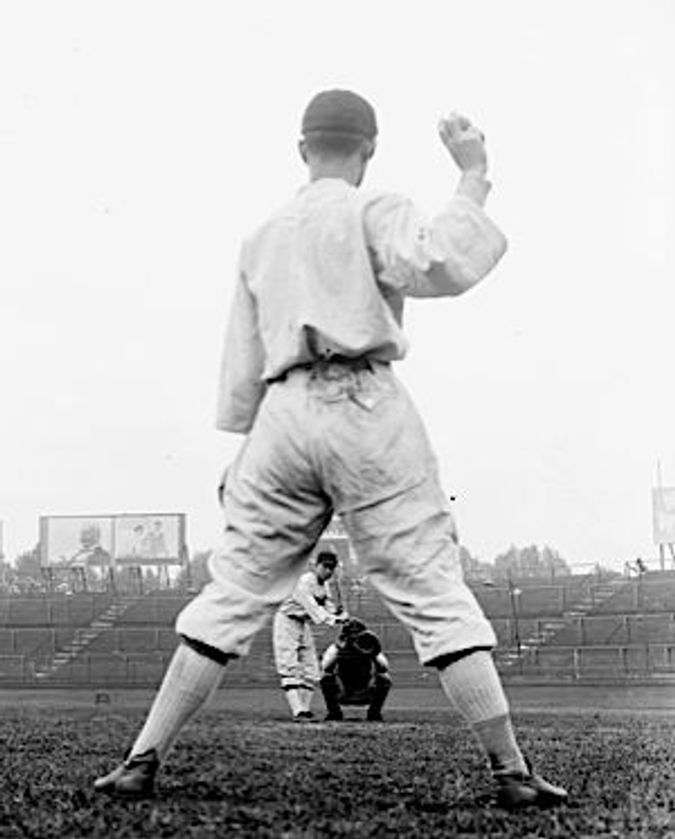 Reb Shlomo and I spent three dizzying weeks making preparations. The shul could no longer pay his salary but they let him keep the office, and Fishel Levine took good care of us. Whenever he’d come in to check our progress, cigar dangling out of his thick lips, he’d say to me, “Ah, there’s the little pisher with the big mouth.” He was glad for me having thought up the team name. Now, instead of rabbi’s assistant, I was manager’s assistant. I think I reminded Reb Shlomo of himself when he was a boy. And besides that, I knew more about baseball than anybody else in tzitzis — except for Reb Shlomo, of course.

Forming a team, we had to start from scratch. The owners and Commissioner Landis might have given the nod to a Jewish team, but they sure weren’t going to give us any of their Jewish talent, and the minor league players weren’t about to take a chance with a team nobody’d heard of, and which might very well become the laughingstock of the league. After about a week it became clear we’d have to pull ballplayers out of black hats. But where to start?

At home, for one. Reb Shlomo and I spent hours canvassing the Jewish neighborhoods. We were looking for the best players, the stickball stars of yesteryear, still remembered on the street. That’s how we ran into Butcher Block. It was in the South Bronx, and after a frigid day spent kibitzing for leads at Jewish barbershops and fish markets, we stepped into a little joint on 149th, near the 3rd Avenue El. Over the roar of the train we ordered corned beef sandwiches and soda water, and sat down to hash things over. An old man sitting nearby overheard us and shuffled over to our table. He leaned in close.

“Next door,” he said, and where half his teeth were missing there were chewed-up shreds of pastrami, “is a butcher. Bernie Block. They say when he was young what a talent he was, the Yonkers wanted for to sign him up. But nayn, his mishpokhe had a business and mouths to feed, so hell with the Yonkers he went to earn for a living. A stronger Yid since the golem I ain’t seen.”

And with that the man shuffled out of the deli, a messy and mysterious news-bearing angel.

“He must have meant the Yankees,” Reb Shlomo said, and we wolfed down our sandwiches and hurried next door.

We were greeted by the sound of a cleaver slicing through flesh and bone. Bernie Block was over six feet tall. Dark hair, big eyes, wide nostrils, and a firm chin: he was neither blessed nor cursed in matters of the face. But gevalt, were his shoulders like boulders; his triceps bulged as he extended his arm, which moved fast as a windmill. Here was a man born to throw a baseball.

“What can I get you?” he asked, still chopping.

“How about a fastball on the outside corner?” said Reb Shlomo.

“Mr. Block,” said Reb Shlomo, cutting him off. “We hear you used to play baseball. Gave it up for the family. How about giving it another try?”

“Listen, Mister,” the butcher said, his voice shaky but rising an octave. “I don’t know who you are or what the joke is here, but I’m a butcher now and—”

Reb Shlomo told him the whole story of our nascent baseball team. The butcher, with an absent and irritated look in his eye, responded:

“We need you, Bernie. From the looks of it, you still got an arm.”

“Forget it. Who would run the store when I’m gone?”

“What about your wife?”

“Who ever heard of a woman butcher?” he said.

“Think about it. If you change your mind, you know where to find me,” said Reb Shlomo. He scribbled something on a piece of butcher paper and handed it to the man.

We left the store. Reb Shlomo turned to me.

“Just wait,” he said. “There’s something of the past left in him yet.”

We took the El back to Manhattan.

The other New Yorkers we found easily. Fayvl Melamid had been a teacher of mine. He was the one who taught us how to play ball after school. One day he showed up at the shul, black hat crushed between his trembling hands.

“I hear you’re looking for players,” he said. Fayvl didn’t look like much, but his eyes had a sparkle.

“What do you play?” Reb Shlomo asked him, and looked at me questioningly. I nodded, as if to say, “I know this man. He’s full of surprises. Give him a shot.” Truth is, we couldn’t afford not to give anybody a shot.

“I played second base when I was younger. I’m rusty, but with God’s help, I can find my game again.”

“We’re going to Tampa in three weeks. We’ll be staying at the Montefiore. You come, you’ll have a chance to show us what you got.”

And Fayvl left mumbling thanks, embarrassed and in a hurry to get back to his afternoon Torah class at the Yeshiva.

A day later Khotsh Greenbaum showed up, too. America’s Jews had heard about our team, and the telegram boy knocked on our door all day long with messages from rabbis, schoolteachers, uncles and grandparents, bragging about this or that somebody who had talent we could use. They came from all over the country: Glenville, in Cleveland; Hyde Park, Chicago; Boston’s old North End; Buffalo’s Lower East Side. The answer was always the same: Reb Shlomo told them to meet us in Tampa if they were serious, and there they could show us their stuff. If they made the team, their train ticket would be covered by Fishel Levine. We were expecting the messenger boy when we answered a knock on our door, but in walked a man with a look on his face like he just ate a lemon sandwich.

“I’m your new second baseman,” he said, not bothering to introduce himself or take off his newsboy hat.

“That’s right,” said the man. “I hear you’re puttin’ together a ballclub and I want in.” He spoke with a thick Brooklyn accent.

“You’ll have to come to Spring Tra—”

“But why waste your time looking for somebody else? You found your man.”

“Who are you?” demanded Reb Shlomo, his puzzlement giving way to impatience.

“Who am I? What of a question is that? Greenbaum’s the name, but people call me Khotsh.”

“Khotsh?” I butted in. I’d never heard of such a name.

“Khotsh,” said Reb Shlomo. “Means although or but in Yiddish.” He turned back to the man who, it seems, always had an argument to make.

“It’s no great mystery how you acquired that name, Greenbaum. Or Khotsh, if you like. Perhaps I will see you at Spring Training.”

And before he had a chance to say anything more, Reb Shlomo pushed him out the door.

“Vey iz mir,” he sighed, once Khotsh was gone.

“A Jewish baseball team. What was I thinking? They’ll argue the umpires to death and nag me into an early grave…”

He picked a baseball off his desk and tossed it in the air. We had a long road ahead of us.

On the first leg of the train journey I couldn’t stop thinking about what my mother had said to me when she saw me off at Pennsylvania Station. There we were: Reb Shlomo, Fayvl Melamid, Khotsh Greenbaum, and a mysterious character who introduced himself as Bennie Abraham and said he wanted to play “American cricket.” Though my mother had complete trust in Reb Shlomo, she was afraid her sixteen-year-old boy was throwing away his future on a game for bums and nogoodniks.

“Better you should flunk out from school in New York than get eaten by a dinosaur in Florida playing on the square all day,” my mother cried, spitting three times on the floor.

“Ma,” I said, trying to escape the crushing pressure of her bosom. “We play on a diamond. And it’s alligators they got, not dinosaurs. I’ll be a good boy. Be proud of me, Ma. I’m making history.”

“A Jew don’t make history. History makes a Jew,” she said, and nearly flooded the station with tears.

Three trains later, we walked out of Tampa Union Station and schlepped our luggage on foot to the Montefiore Hotel. All the ballplayers of the Hebrew Nation were already awaiting our arrival, smacking their gloves in expectation and holy dreams.

Come back next week for chapter four, “Spring Training.”

The Lions of Zion, Chapter Three