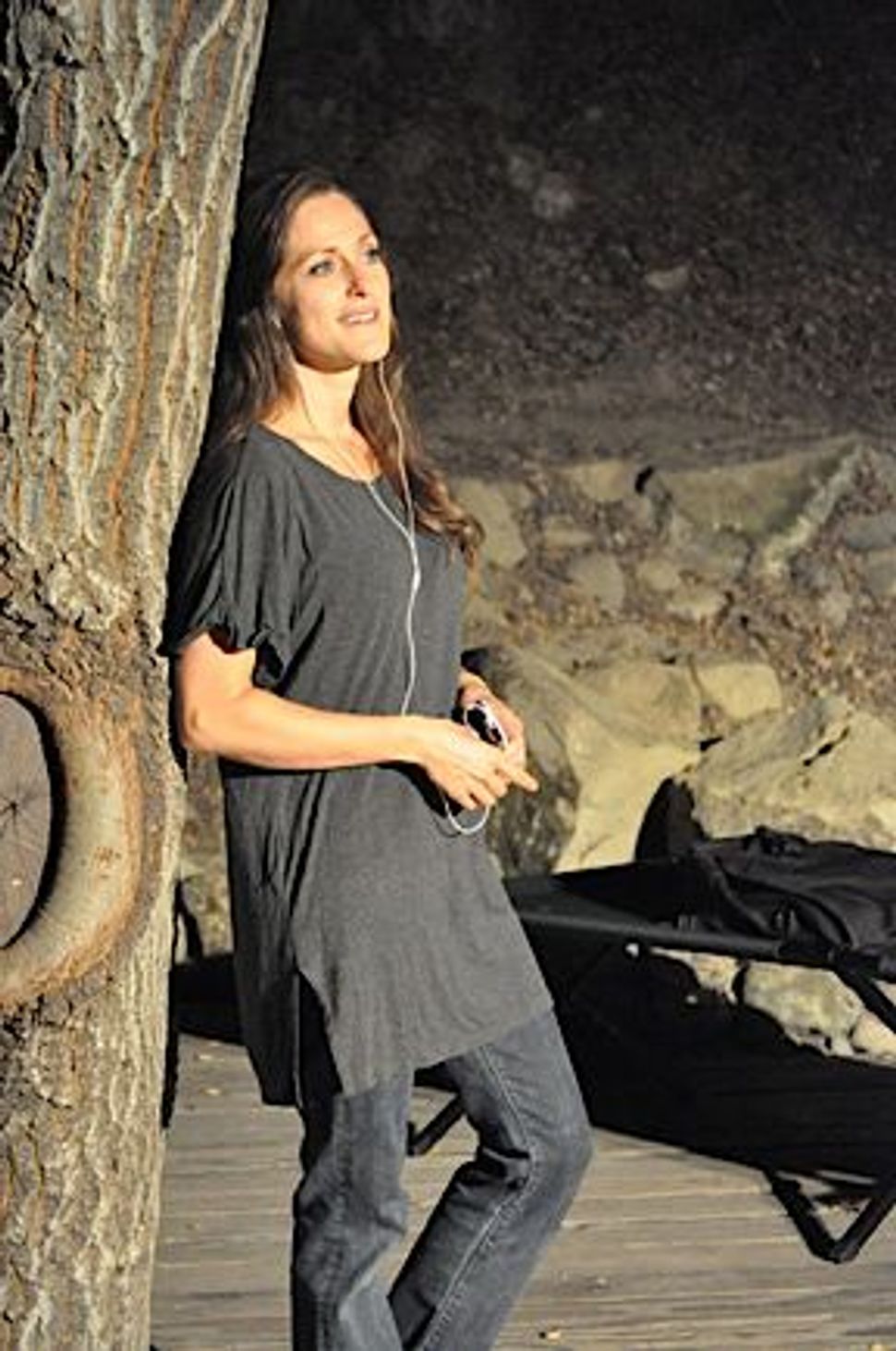 Samara Frame as Rachel Corrie at the Will Geer Theatricum Botanicum. Image by Ian Flanders

According to artistic director Ellen Geer, the theater decided to go ahead with the production despite pressure — and threats — from pro-Israel activists.

“The pressure was directed to me,” Geer said. “They were personal to me, saying my own father [Will Geer, who played Grandpa Walton on the 1970s TV series “The Waltons”] would be upset.”

Geer said that the pressure came not from organized groups, but from pro-Israel “individuals acting on their own.”

“We had a wonderful, wonderful conversation with the Jewish Federation,” she said. “They of course couldn’t back the production because they don’t agree with it. But they talked about how they understood what it was we were doing; I was quite impressed with them.”

The play, which was co-written by actor Alan Rickman and The Guardian editor Katherine Viner based on Corrie’s journals, letters and e-mails, premiered at London’s Royal Court Theatre in 2005. The show had a sold-out run, but it ran into trouble when it crossed the Atlantic. The New York Theatre Workshop indefinitely postponed its U.S. premiere in 2006, before the play eventually opened at Greenwich Village’s Minetta Lane Theatre.

Geer said the purpose of the play is to discuss Israeli-Palestinian relations, and that after each performance there are panel discussions with theatergoers. Following the premiere, Oscar-winning cinematographer Haskell Wexler was one of the panelists, and the audience included a female rabbi, who called the play “one-sided.” Other panelists included Steve Goldberg, National Vice Chairman of the Zionist Organization of America, and Rabbi Sarah Bassin. Pro-Israeli literature has also been distributed near the theater’s entrance.

The Geers are no strangers to the art of controversy. During the 1930s, Will Geer was kidnapped and beaten by the Friends of New Germany when he directed the Hollywood Group Theatre’s production of Clifford Odets’s anti-Nazi play, “Till the Day I Die.”

In 1937 Geer had a lead role in the Federal Theatre Project’s “The Cradle Will Rock” by Marc Blitzstein, directed by Orson Welles. At the last minute the New Deal theater bureau refused to allow the pro-labor musical to open, and so the cast moved to a replacement venue on Broadway. In 1951 Geer testified before the House Un-American Activities Committee, called it a “turkey,” and was blacklisted from Hollywood movies. That’s when Geer created the outdoor Theatricum on his land near Malibu. He went on to co-star in the 1954 radical classic “Salt of the Earth” and “The Waltons.”

Regarding “My Name is Rachel Corrie,” Ellen Geer said that if she had to do it all over again, “of course I would.”

“What I’ve learned from watching my parents is that when fear comes, that’s when you’ve got to stand taller,” she said. “Fear is a disease; it grows.”