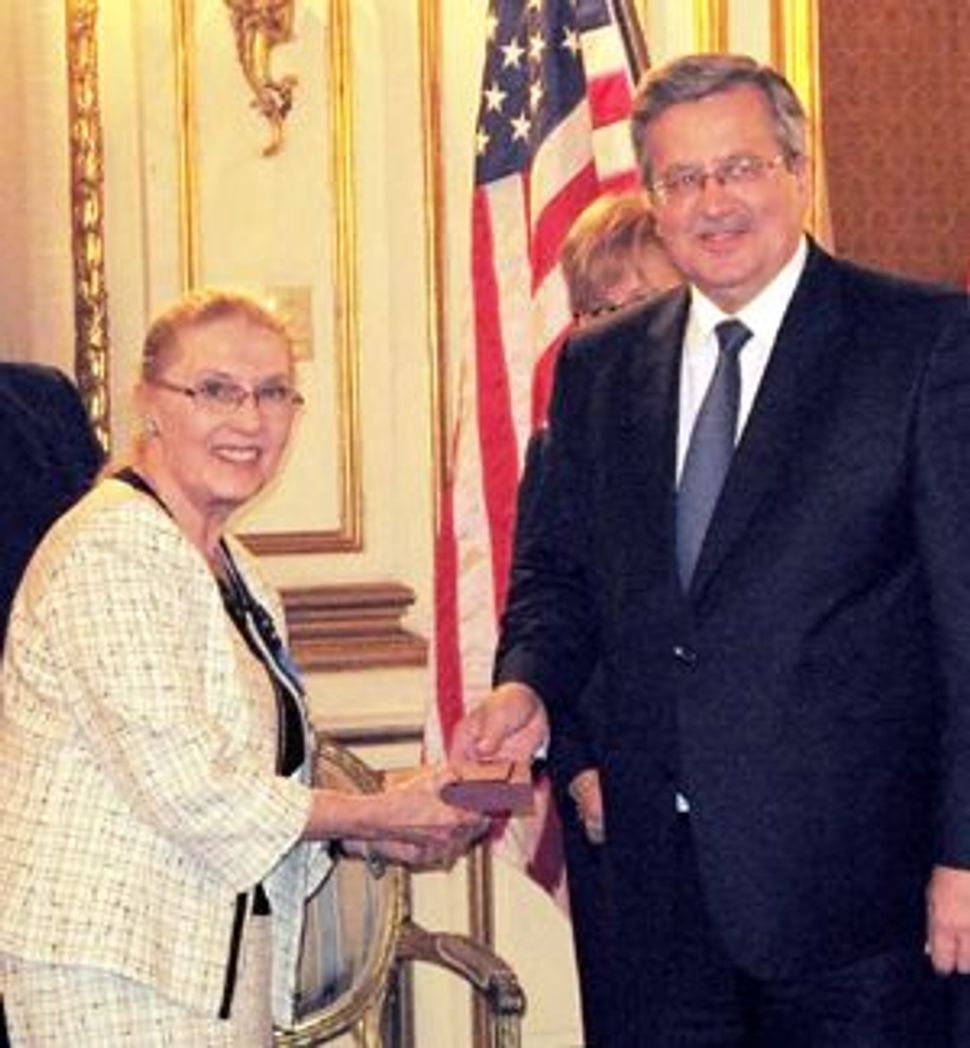 Masha Leon receiving the award from the President of Poland. Image by Karen Leon

Columnist Masha Leon, who has covered social events for the Forverts and then the Forward for more than 30 years, was honored Thursday night by the government of Poland for her articles and other work that have helped further the understanding of Polish-Jewish lives, history and culture.

The president of Poland, Bronislaw Komorowski, pinned a blue-ribbon medal with a silver eagle, the Knight’s Cross of the Order of Merit of the Republic of Poland, on her chest in a ceremony held in the grand salon of the Polish consulate in New York City. The award has been given since 1974 to foreigners or Polish citizens living abroad.

Leon was among 26 honorees — three of them women — who attended the ceremony and were given the diplomatic order for their extraordinary service to the Polish nation. The names of about a half dozen other honorees were also read, among them Forward contributing writer Ruth Ellen Gruber.

Leon, who is normally talkative, was at a loss for words to describe how she felt about receiving the prestigious award. “It’s beyond description,” she said. “It’s really a validation by the government of the role Jews historically played in Poland.”

In presenting ribbons around the necks of some and medals to others, Komorowski, said the honorees were chosen for “the achievements you have made throughout your lives.” His remarks were spoken in Polish, and translated into English.

Noting “the Polish heart is so big” the president said that each of the honorees had a story to tell about what he or she had overcome.

For Leon, on the night that she shook hands with the Polish president and was warmly greeted by Consul General Ewa Junczyk-Ziomecka, the memories of her girlhood days on the streets of Warsaw, where she was called names and stones were thrown at her simply because she is a Jew, came flowing back easily.

In an interview, Leon, nee Masha Bernstein, recounted how during World War II she and her mother, Zelda Bernstein, were hidden by a Catholic woman, until they could escape from German-occupied Poland to Russian-occupied Poland. Her father, Matvey Bernstein, a Polish journalist, was imprisoned for his anti-Communist sympathies.

For Leon and her mother, the odyssey took them to Lithuania for a year, to Japan, and eventually to the United States.

Leon began writing for an English insert in the Forverts in about 1980. Then her coverage of Jewish galas, dinners, awards ceremonies and other events migrated into the Forward, where she writes a weekly newspaper column called “On the Go” with an expanded version of the column online. She has also written about the Holocaust, arts and culture, moderated panels and been involved in other ways in furthering Polish-Jewish dialogue.

From attending dozens of events each month, she is widely known in Jewish circles for buttonholing machers for comments and boldfacing their names in the paper. Her daughter, Karen, is always at her side, camera in hand.

The Polish consul general told Leon about six months ago that she was being considered for the award. The columnist submitted 25 to 30 articles from the Forward, and promptly forgot about it until the consul general called to tell her recently that she would be recognized.

Thus, the tables were turned.

Leon was honored in the Versaille-worthy, mirrored salon with the gilded ceiling, where down through the years she has reported on the remarks of many high achievers. The columnist confessed to the Forward that it was very hard to sit on her hands and refrain from jotting down notes when it was her turn to be in the spotlight.