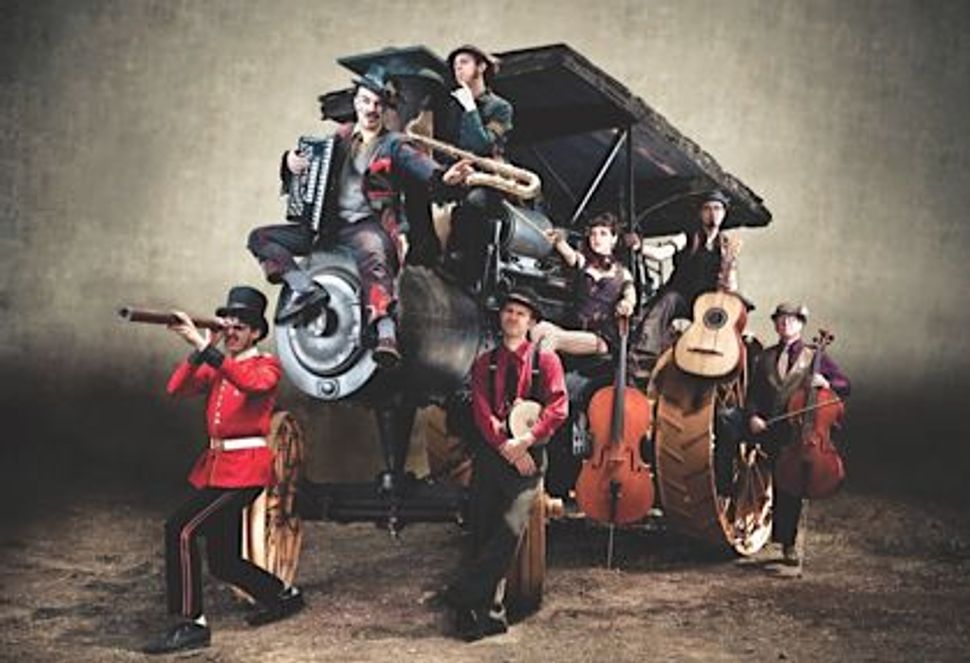 “Sing” is a hallucinatory experience evocative of the Polish-Jewish surrealist Bruno Schulz. Though it isn’t a concept album, one would be forgiven for thinking there is an embedded story to be extracted. On the opening track, “Red Balloon,” Stern dictates over slow syncopated strings a story about a dissolved romance and a man searching for his loved one in a red balloon. The summary doesn’t do the language justice. The lyrics are embellished and outlandish, evocative of musical theater. Stern’s voice is exaggerated and buoyant, almost ridiculous. “1873,” he says, and you can hardly believe this is serious, “Dr. Xander Gerrymander ascended the heavens in his marvelous red balloon. / There, to ponder the cosmic verities, sail above the blue and see the stars.”

Songs like “Tough Mazel,” Stern’s original klezmer composition, match the muscular punk snarl of a Golem track with a wry theatrical feel. The band describes themselves as steampunk — referencing the contemporary aesthetic movement that imagines an anachronistic, pseudo-Victorian history. Though steampunk is often critiqued for being aesthetically one-note, Vagabond Opera finds a way into the aesthetic that doesn’t feel like cheap novelty. Partially this is because excavating 19th-century Eastern European music sounds inherently anachronistic in 2011, but it is also because Vagabond Opera’s heart lies with a less frequently cited European artistic tradition: Dadaism.

Tom Sandqvist traces Dadaism to Eastern European shtetl life and Yiddish romanticism in his history, “Dada East: The Romanians of Cabaret Voltaire,” and it is precisely this linkage that Stern and Jackson, both Jewish, exploit on their new album. “One of the reasons I left the mainstream opera world was because I wasn’t getting to drink from the deep well of my Eastern European Heritage,” Stern says. Sometimes, trying to fit all of those influences in one album can make it feel cluttered and packed. Still, nothing else this year is quite as strange and wonderful as “Sing for Your Lives!”