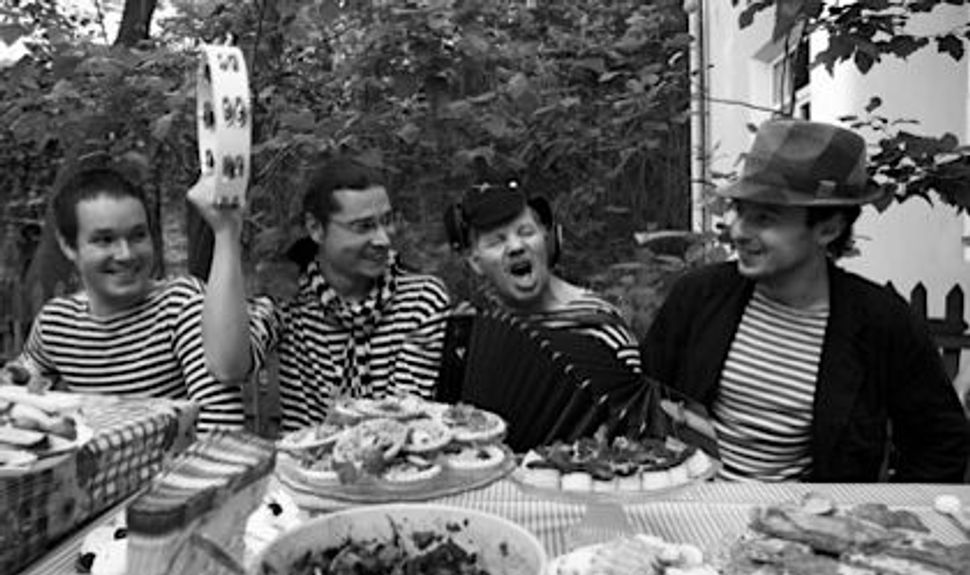 It’s no coincidence that The Klezmasters are highly reminiscent of The Klezmatics. The former band, which bills itself as Russia’s only klezmer orchestra, was inspired by the latter. Having been created in 2003 by a group of classical music students who met through Hillel in Moscow, The Klezmasters have been gaining notoriety in recent years both at home and abroad.

In the San Francisco Bay Area this week for their first U.S. tour, members of the group took time out to meet with The Arty Semite at a Russian-owned café in Palo Alto, Calif., and to talk (through an interpreter) about their passion for Yiddish culture and klezmer music.

The band now consists of six members ranging in age from 27 to 65: Lev Sandyuk on piano; Mikhail Blinkov on clarinet; Ilya Shvetz on violin; Alexander Fain on accordion; Vladislav Uralsky on percussion; and Fyodor Kurzanov on guitar and bass. The first four were able to come to the U.S. for the tour.

While some members of The Klezmasters are Jewish, some are not. “And we think that is just great,” said Sandyuk, who is the orchestra’s leader. “Our tuba player, who rotates in when our bass player is not available, is a Tatar named Firgat Musin. You should see how he glows with happiness when he is playing klezmer with us.”

Members of the band explained that in Russia, unlike in neighboring Ukraine, there are few truly good klezmer musicians. “Sure, you can hear a klezmer violinist playing along to a soundtrack in some restaurant, but that is not at the level of what we do,” Sandyuk said. “It’s a traditional and territorial matter,” Blinkov added, trying to explain why klezmer is not as developed in Russia. “There is just not as much of a history and developed culture of klezmer and Yiddish music where we are from.”

But according to The Klezmasters, interest in their interpretations of traditional klezmer, Balkan music, and Odessa songs has grown in recent years. While they tour in Ukraine and other parts of Europe, playing at festivals alongside some of their idols, they also play gigs ranging from bar mitzvahs to large public concerts in Moscow and other Russian cities. Their talents have also been in demand by theater and television producers. This year, they scored “Shosha,” a play based on the novel by I.B. Singer at Yevgeny Mironov’s State Theatre of Nations and “Once Upon a Time in Odessa,” a Russian state TV series based on Isaac Babel’s “Odessa Tales.”

Joining The Klezmasters on stage in the U.S. are singers Victoria Dmitrieva and Maria Krutyanskaya. Dmitrieva, who travelled with the musicians from Moscow, has known them for about a year. Krutyanskyaya, who has lived in Silicon Valley for the past decade, organized the tour. The two women have been close since their days together at the music department of Moscow Pedagogical University, when they were a Yiddish-singing duet under the tutelage of a professor who was the last living actress who had worked under Solomon Mikhoels at the Moscow State Jewish Theatre. “She taught us correct Yiddish pronunciation and songs like “Zol Zayn” and “Fraytik Oyf Der Nakht,” Dmitrieva said.

She and Krutyanskaya are also performing Soviet romance songs with The Klezmasters. Dmitrieva has won awards singing these compositions from the 1930s and 1940s that were written primarily by Jews. Deemed too “decadent” by Stalin, and banned in the Soviet Union, the singer noted that they were popular at that time in Europe and Japan. Blinkov arranges some of the band’s tunes, but Sandyuk emphasizes that it’s not really a matter of reading sheet music. “Nobody teaches this kind of music — at least in Russia. You need to learn it by feeling it, by being into it. It’s unique and you get sucked into it,” he explained. “It’s in our blood. It’s our ancestors calling.”