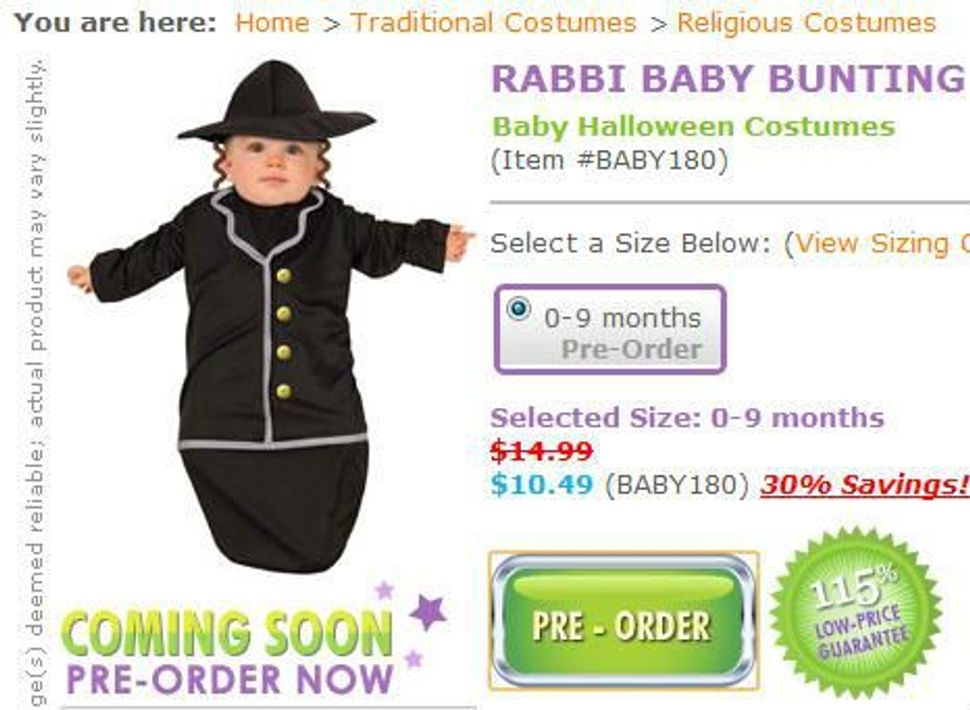 The Houston Chronicle has done a little pre-Halloween window-shopping and found some children’s costumes that parents should think twice about. The paper’s parenting blog deems them uncomfortable, over-sexualized or, as in the case of one Jewish-themed costume, culturally insensitive.

In the over-sexualized department, most of the costumes are for girls — as might be expected — and many have either extremely short skirts or no skirts at all. The Shmooze agrees that a tween should not be dressed as though ready for roleplay as a French maid, sexy schoolgirl, or Santa’s helper. Likewise, a little boy should never be seen in a pimp suit and hat straight out of a 1970s blaxploitation film.

The suede leather “Sweet Native Girl” mini-dress costume is a twofer, fitting both the over-sexualized and culturally insensitive bills.

The other outfit deemed culturally insensitive by the Houston Chronicle is called “rabbi baby bunting.” It includes a miniature black coat and hat with long, curly peyes attached to it.

Sure, some people might object to this blatant stereotyping. (Where, the Shmooze wonders, is the non-Orthodox variation on this costume? And how about a version for little girls?)

Plus, the costume is bound to look ridiculous on a kid not yet old enough to grow much hair on his head, let alone produce exceedingly long sideburns. On the other hand, is it ever too early for a Jewish mother to prepare her son to grow up to be a rabbi — that is, assuming he’s not going to medical school?