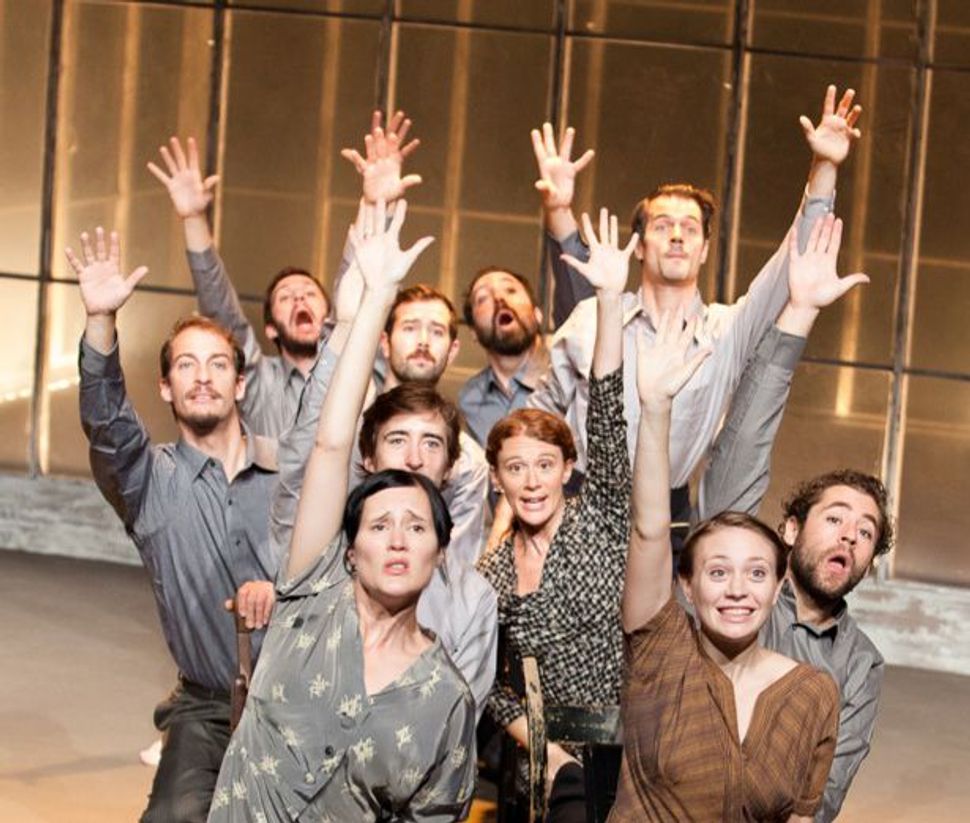 That this play, a skillful amalgam of fact and fiction, was written by a Pole and has been performed extensively in Poland (where it won the country’s top literary prize) is perhaps the most astonishing thing about it. An extended indictment and cri de coeur, it must be overwhelming to encounter there, as an observer linked to its plot by geography and history. But even in Philadelphia in the comfortable confines of the Wilma, under the emotionally resonant and precise direction of Wilma artistic director Blanka Zizka, “Our Class” (in an English version by Ryan Craig) is not an easy evening at the theater.

It is an unforgettable one. Beginning with the conceit of a class of Jews and Poles, and a stage littered with overturned chairs and bare trees, Slobodzianek and Zizka lead us on a nearly 80-year journey through political and personal upheaval. The 10 characters, partly based on real-life counterparts, exist in both the past and the present, alternately experiencing their stories and narrating them. Song snippets, suggesting both childhood innocence and nationalistic fervor, are interspersed between what the playbill describes as a series of “lessons.”

Act I, which gives us the run-up to the massacre and the conflagration itself, is unrelenting. Slobodzianek immerses us in the brutalization visited upon the Poles first by Soviet and then by Nazi invaders, and then — as though in reaction — by the Poles on the Jews. (The play was inspired by Jan T. Gross’s controversial 2001 book “Neighbors.”) By the end of the act, two Poles are sheltering Jews. But the other three have metamorphosed from rambunctious school kids to murderous monsters, and forgiveness seems all but impossible.

In Act II, inevitably, the tension dissipates, and the play loses some of its intensity. On the other hand, the superb ensemble — from Allen Radway as the most treacherous Pole, Zygmunt, to Kate Czajkowski as Rachelka, who reluctantly converts and marries her Polish savior, Wladek (Ed Swidey) — slowly flesh out and differentiate their characters.

For years, Poles had acknowledged the Jedwabne massacre, but blamed it on the Nazis. In 1949, 10 Poles were convicted of collaborating with the Germans. The more widespread complicity of Poles was revealed, as “Our Class” dramatizes, when a handful of survivors and witnesses finally came forward.

“Our Class” fails — as perhaps any artwork touching on the Holocaust must fail — in explaining just how human beings could turn so virulently on their own neighbors. But it succeeds in offering both a shattering elegy on Jewish loss and a moving affirmation of Jewish survival. Both are articulated, finally, by Abram (Michael Rubinfeld), a character who emigrates to America, becomes a rabbi, mourns the murder of his Old World relatives — and starts a thriving new family.