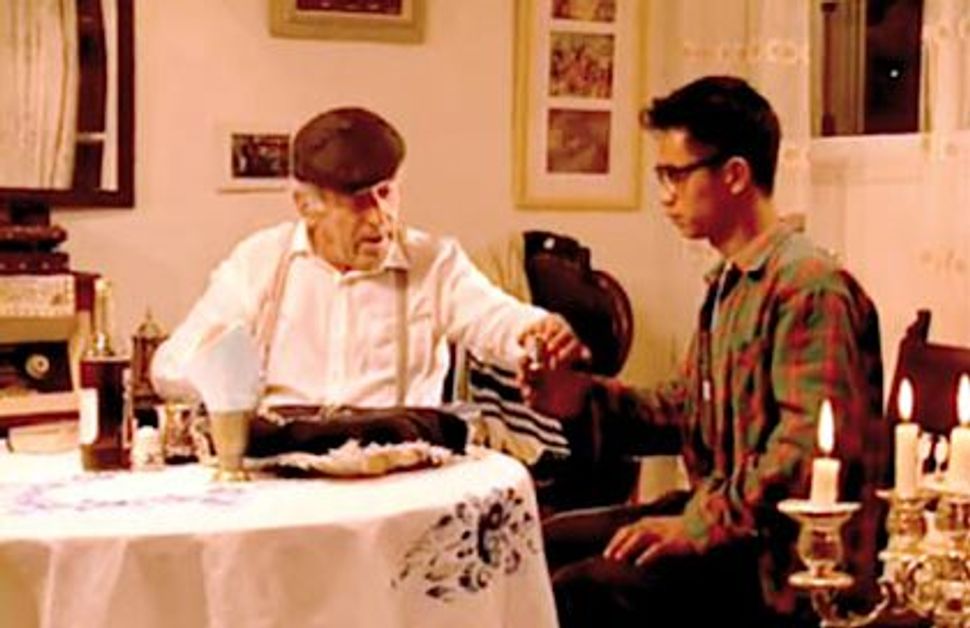 Three short Yiddish films created by students at the Ma’aleh School of Television, Film and the Arts, an Orthodox film school in Jerusalem, have recently become available for rental on the Internet, sparking interest from fans of Yiddish cinema worldwide.

Many of the Ma’aleh students’ films explore sensitive issues in the Israeli Orthodox world as well as in Israeli society at large. A number of them, including the three Yiddish films, have been screened at film festivals and received awards in the U.S., Europe and Asia.

Because Ma’aleh is a school for religiously observant Israelis, the three films — “Cohen’s Wife,” “Elyokim” and “A-Maiseh” — contain no nudity, gratuitous violence or coarse language. Yet despite the fact that the filmmakers at Ma’aleh hail from religious homes, the actors are all secular, said the school’s director of international relations and special projects, Einat Kapach. “The actors are willing to do it for low pay or no pay at all, because they appreciate the courage of the filmmakers in taking on these subjects.”

“Cohen’s Wife,” directed by Nava Heifetz, depicts the painful story of a young married woman, Rivka, who is raped by a stranger. Her husband, Motl, a kohen, must await a rabbinical court’s decision if he can remain married to her, since Jewish law stipulates that a kohen’s wife who is raped is forbidden to her husband. The tension between husband and wife as they await the verdict is palpable as he tentatively embraces her and then pulls away, frightened of transgressing Jewish law. In one scene Rivka hangs freshly washed white sheets on the clothesline, an apt sympol of the optimism and innocence she has lost, and although Motl tries to approach her, she keeps evading his grasp as she disappears behind the sheets.

Although Heifietz doesn’t hide her disapproval of a situation in which a man might leave the wife he loves in the name of Jewish law, she nevertheless portrays the Orthodox rabbis on the court sympathetically, as they leave no stone unturned in trying to find a loophole to allow the couple to stay together.

In Miri Bocker’s film, “Elyokim,” a paralyzed but brilliant yeshiva student pines for Rokhl, the daughter of the head rabbi of his yeshiva. Although he tries to convince the matchmaker to set them up, it’s clear that a match like this is impossible according to the conventional social mores of the Hasidic world.

Bocker said that she was inspired to make the film as she was walking past Mea Shearim on her way to the entrance exam at Ma’alot. “When I was asked what kind of film I would like to make, I thought about the native Yiddish I had just heard on the streets of Mea Shearim, and how many girls were looking out their windows and decided that was what I wanted to explore.” In “Elyokim,” the rabbi’s daughter constantly peers out the window as if in anticipation of something wonderful — and yet, she has no idea that a young man, Elyokim, is simultaneously watching her from his own window.

Bocker sympathetically depicts realistic, everyday scenes of the Haredi world, but she does so with a critical eye. In fact, after making the film, Bocker was concerned about a possible backlash from the Haredi community, especially after her modern Orthodox colleagues agreed that the film would cause problems because it was “against the Haredim.” “But surprisingly, when I gave the script to the Haredim, they accepted it more. They liked it,” Bocker said.

Bocker was raised in a religious home in Jerusalem, where the family spoke a blend of Yiddish and Hebrew. When she started considering making a film in Yiddish, she wasn’t sure how today’s Yiddish-speaking Israelis expressed themselves until she spent an evening with the family of the Haredi journalist, Dudi Zilbershlag.

“I listened to how he, his wife and their children spoke to each other and I noticed that it was very similar to my own experience: a combination of Yiddish and Hebrew,” Bocker explained.

The last of the three films, “A-Maiseh,” doesn’t take place in the Haredi world at all. It’s a story about the warm relationship between a Holocaust survivor and his Filipino aide — a common phenomenon in Israel today.

The young aide, Jose, is an illegal immigrant and has come to tell the elderly man that he has to run away because the police are after him. The grown children of the old man (the Yiddish-speaking daughter is, incidentally, played by Bocker) try to convince their father to let him go, but he won’t hear of it. He loves Jose like a son and speaks to him only in Yiddish.

Although the plotline is fraught with tension as Jose peeks nervously out the window at the police below, the director, Itzik Sverdlov, decided to tell the story as a comedy — and succeeds.

“In this movie, Yiddish, the language of the aged, as well as the aged themselves, are symbols for all that has been wrongfully rejected by contemporary Israelis,” explained Zelda Newman, assistant professor of Yiddish and Hebrew Language and Literature at Lehman College. “The elderly hero of ‘A-Maiseh’ not only retains the language of the past, he also retains the Jewish wisdom of the ages that has been lost in modern (Hebrew-speaking) Israel.”