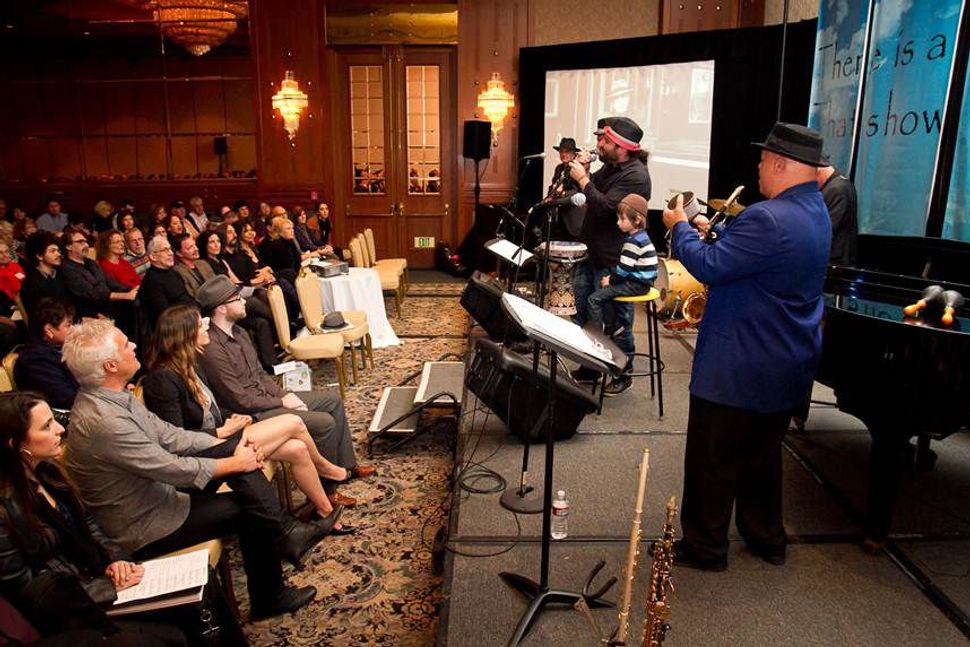 The Jewish Federation of Greater Los Angeles concluded its 2011 centennial celebration with an event headlined “Imagining Our Future,” drawing more than 600 people to the Sheraton Universal Hotel for a “day of Jewish learning and culture” and a promise of a glimpse of the next hundred years of Jewish life in L.A. But if the past is prologue, and the attendees’ kvetching over the lack of bagels and pastries with the morning coffee is current history, then a future of Hebraic disgruntlement comfortably like the present seemed assured.

A similarly cranky note was struck by filmmaker and novelist Michael Tolkin during the day’s first session, “The future of Jews in Hollwyood.” Asked if he believed Jews controlled Hollywood, he replied: “Not my Jews,” on behalf of downtrodden Writers Guild members everywhere. And while session participants, including a television producer and an agent, seemed upbeat about the ability of Jews in entertainment to maintain their Jewish identities within the business as never before, none tackled the more serious question of the underlying malaise currently afflicting the film, television and music industries for reasons that extend beyond ethnicity (unless you count digital downloading a tribal activity).

A “sermon slam,” in which a panel of rabbis was challenged to deliver three-minute sermons based on audience suggestions, promised to be a clever diversion during the lunch break. But it never quite came off. The high point was Rabbi Marvin Hier’s recounting of a bawdy anecdote about a man who, following the death of his father, asked the rabbi if sex was permitted during the period of mourning. “For a father you’re sitting shivah seven days,” Hier said the rabbi told the man. “What kind of sex are you talking about?” One observer commented appreciatively that it was perhaps the one time he had ever heard the noted Holocaust expert and director of the Museum of Tolerance fail to mention the Holocaust.

Afternoon sessions including “Imagining our Green Future,” and another on how the Jewish community is (or isn’t) embracing the LGBT community, were well-attended. For “Dreaming Big Visions,” presented by Limmud-L.A., however, it was standing-room only. Led by a panel of visionaries, including Joshua Avedon from Jumpstart, an incubator for Jewish start-ups, two rabbis and a Hillel high school student, the panel discussion “traveled 50 years into the future” for ideas on how L.A.’s Jews might then be thriving. Attendees then engaged in small group learning and brainstorming sessions.

Rabbi Daniel Bouskila of the Sephardic Educational Center proposed a center for Jewish learning that would draw young people devoted to their iPhones and other digital devices — an “Apple Store Beit Midrash,” he called it — that would serve as a community hub. Avi, a high schooler, envisioned more interfaith activity — those enrolled in Jewish education tended to live “insular lives,” he said, and in the most culturally diverse city in the nation, he had only recently met Islamic students through an interfaith group. Rabbi Chaim Seidler-Feller of UCLA Hillel foresaw a “center for Jewish sages,” a sort of community think-tank. Avedon, too, prognosticated a future where Jewish learning flourished. “We can potentially be the capital for innovation of the Jewish world,” he said.

A concert tribute to L.A. resident Leonard Cohen by a spirited group of musicians capped off the event, preceded by Federation President Jay Sanderson who predicted the future by promising the event would be repeated next year. However imperfect, the shmooze fest was perhaps best summed up by the Cohen quote highlighted on the concert stage backdrop: “There is a crack in everything. That’s how the light gets in.”