Jews in Motion: The Artistry of Josef Herman 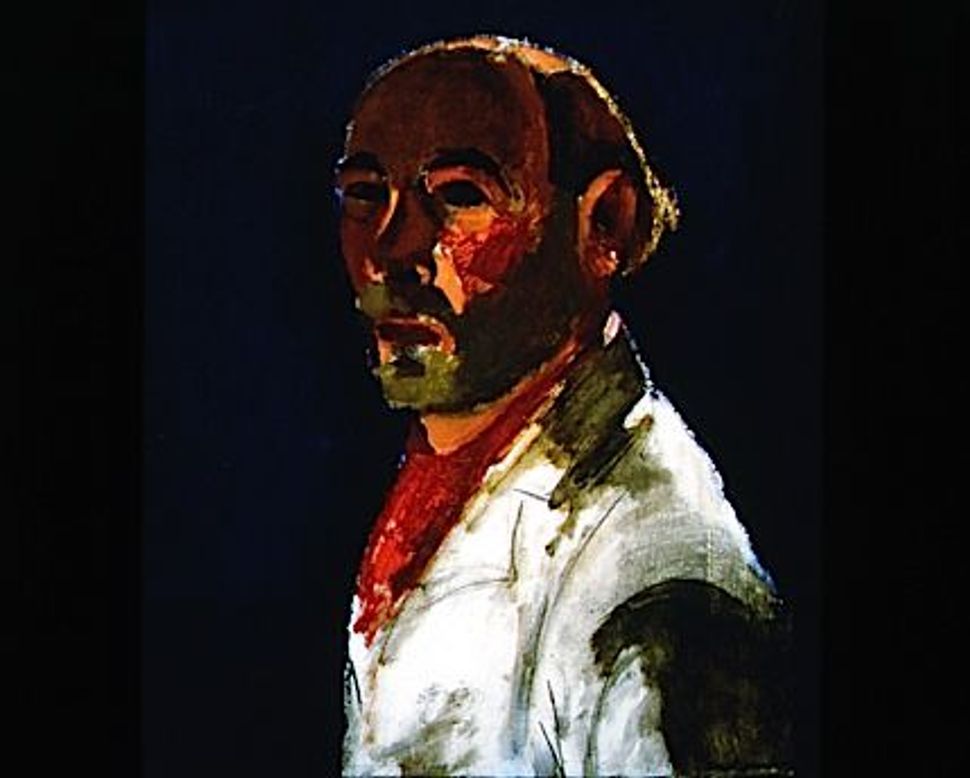 Self-portrait: Among many other inspirations, Josef Herman used himself as a model. Image by Courtesy of Ben Uri Gallery

The Polish Jewish painter Josef Herman, who settled in the UK as a refugee, is best known for his monumentally blocky paintings of Welsh miners whom he depicted empathetically while living for over a decade in a Welsh mining town, starting in 1944. Now a centenary exhibit, “Josef Herman: Warsaw, Brussels, Glasgow, London, 1938-1944” traces the artist’s trajectory before he reached Wales. It’s on view at the Ben Uri Gallery: The London Jewish Museum of Art until January 12, and has already produced an eye-opening catalog.

Unlike the voluminous stasis of his Welsh miners, Herman, who died in 2000 at age 89, saw his Jewish forebears as a society in full motion, dynamic and vivid with a baroque or rococo sensibility. In the 1940 painting “Jews Dancing,” figures hurl themselves around in ecstatic abandon with defiantly macabre vigor as if aware that for European Jews, any dance then was a dance of death. Unlike Chagall’s shtetl denizens, Herman’s are too dynamic to care about being winsomely charming. Herman’s figures move energetically even when sitting still, as in “The Explainer,” a drawing from c. 1940-43, in which a bearded man makes a dramatic hand gesture to better drive home an argument.

Humble domestic tasks are infused with energy, as in “A Jewish Peasant Milking the Goat,” a drawing from c. 1940-3, which dissects movement in a way akin to the paintings of modernist Francis Bacon. In Herman’s “Untitled Drawing (Rabbi, Boy, and Cockerel),” a contemporaneous drawing, a bird thrashes while a rabbi calmly grips its legs and a tiny yeshiva bocher watches in wonderment. Even in tragic drawings such as “Warsaw (Ghetto) is burning (April 19) 1943,” — the artist’s family died in the Ghetto — Herman’s massively bulky figures are ferociously active.

Equally complex, Herman’s series of images of people in Purim costumes from around 1940-43 combine exuberance and ominous dread. Like the spookily creepy Carnival figures of the 17th century baroque printmaker Jacques Callot, Herman’s Purim celebrants are costumed for festivities at a time when mock horrors were being overshadowed by real ones. One of the only disappointments of “Josef Herman: Warsaw, Brussels, Glasgow, London, 1938-1944” is the catalogue cover, oddly displaying a caricatural costume design for an Asian character instead of one of the many images here redolent of Herman and his Yiddishkeit. Already familiar to art lovers as an expressive draughtsman and incisive diarist as well as for his dramatic life story, Herman must now be accepted as a modern master.

Jews in Motion: The Artistry of Josef Herman