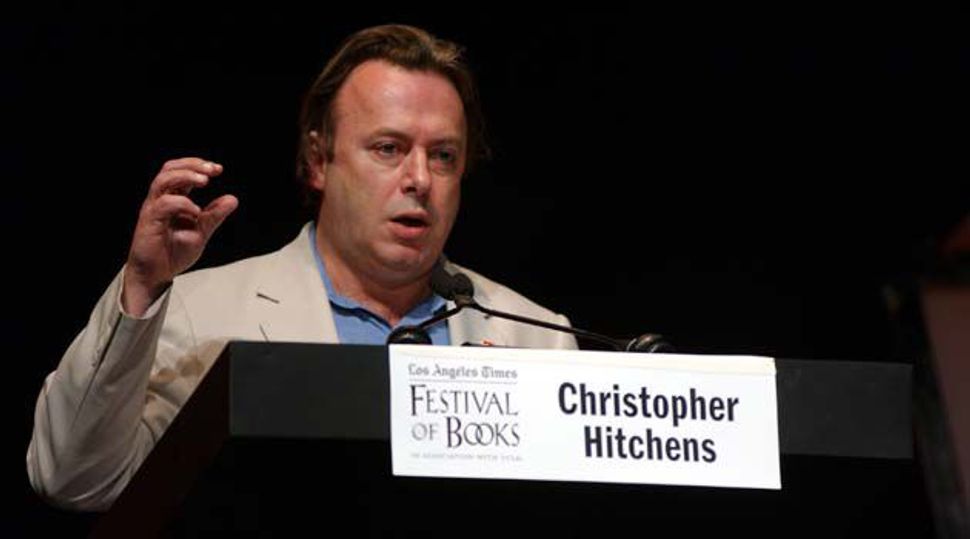 Journalist, critic, pundit and all-around provocateur Christopher Hitchens died December 15 at the age of 62. The outpouring of appreciation (and criticism) has been immense, including this piece in the Forward by Shmuley Boteach. But the Forward recognized Hitchens long before his death for his considerable — and considerably polarizing — gifts. In 2002, Hitchens was included in the Forward 50, our annual list of the most important and influential contributors to the American Jewish story. It was an interesting time in Hitchens’s career, coming shortly after 9/11, when he was making a break with many of his colleagues on the left. Our write-up at the time read:

As Washington journalism’s left-wing curmudgeon-in-residence, the British-born Christopher Hitchens, 53, is best known for his savaging of popular icons from Bill Clinton (“invertebrate”) and Henry Kissinger (“war criminal”) to Mother Teresa (“reactionary,” “obscurantist”). During the last year, though, he’s undergone a metamorphosis, emerging as what some call a moral beacon. He’s repeatedly berated his fellow leftists for tolerating “Islamo-fascism.” In September he publicly quit his 20-year perch as a columnist in The Nation, saying the left-wing weekly was becoming “the echo chamber of those who truly believe that John Ashcroft is a greater menace than Osama bin Laden.” What’s bugging him? Most observers say it’s a reaction to the September 11 attacks. A few critics see a longing for greater gravitas, pointedly reflected in his hagiographic new book about his avowed role model, “Why Orwell Matters” (Basic Books 2002). Perhaps most revealing, though, was his September essay in Vanity Fair, “Jewish Power, Jewish Peril,” an alarmed look at the worldwide state of threats to Jews — a group that, as he repeatedly notes, includes himself. Hitchens has made occasional reference in public to his 1988 discovery that his late mother was Jewish, making him “a wretchedly heretic and bastard member of the tribe.” His journey during the last year suggests, he acknowledged to the Foward, that the discovery and its implications have now seeped deep into his consciousness.

Rest in peace, Hitch, wherever you are.