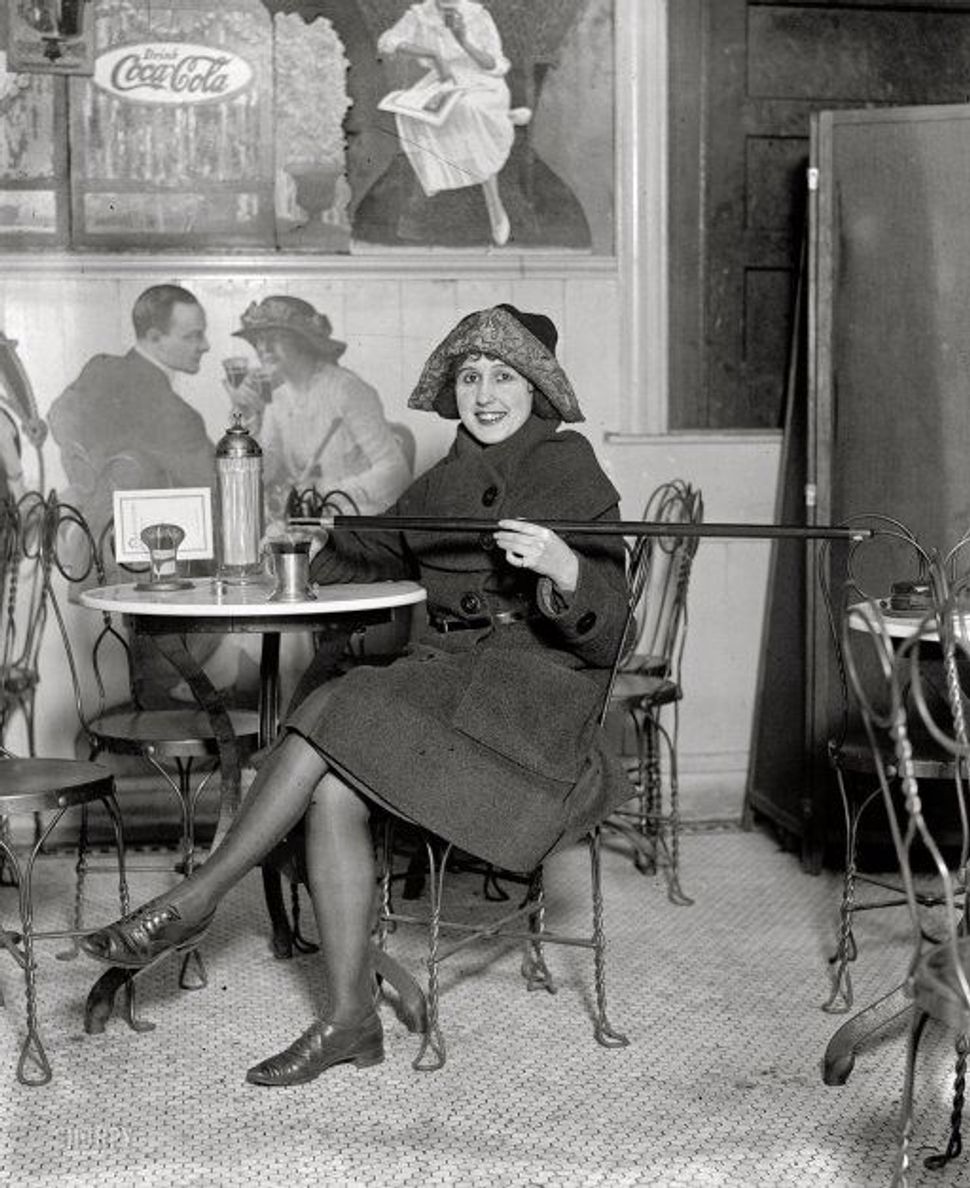 A woman uses her cane flask during prohibition. Image by Wiki Commons

Prohibition may long be over, but one 21st-century Kate Hester is bringing the speakeasy back to life in Brooklyn. In its newest incarnation the speakeasy — called The Hester — features gourmet kosher food and live music, in addition to a full bar. The hostess — who asked that her real name not be published — is a personal chef and mother of two who also has a degree in sound engineering. “There’s just nothing out there that brings together great music and great food, that’s kosher,” she said.

Guests at the most recent event — the speakeasy takes place about once a month — arrived from across Brooklyn and as far north as Washington Heights, like my husband and I. (It turned out we weren’t the only ones who had shlepped that far; we ran into a neighbor, too). Activist Daniel Sieradski lives close by, but that’s only part of what drew him to the event, which, he pointed out, is a welcome change from the typical JCC fare of singles events and Israel programming.

At its launch a month ago there was standing room only. This time around the evening coincided with the third night of Hanukkah, with dozens of other Jewish events competing for a similar audience, so the space was not quite as packed, but the tables were mostly filled and there was additional seating on living room sofas.

Upon arriving at The Hester, located inside a lovely Victorian home, we were greeted by a maitre d’ and seated at elegantly set tables in the dimly lit room that, by day, is a children’s playroom. Doris Cellar of the Freelance Whales was finishing up her set when we came in, and from the little I caught it was great — indie-folk in the tradition of Joni Mitchell, but with a hipster twist. Between the first and second sets we ordered a light dinner and drinks. Highlights were the decadent “Seasonal House Chips with Roasted Garlic-Parsley Sour Cream Dip,” and The Hester’s signature cocktail, the “Pear-Ginger Smash.”

The evening was billed as an album release party for Stereo Sinai, a two-person band featuring husband and wife Alan Jay Sufrin and Miriam Brosseau, both on vocals and guitar. Their songs infuse what the couple describes as bubblegum pop with lyrics from Tanakh, including some scenes that wouldn’t seem particularly singable. It was funny, but I found myself humming along to a tune whose words narrated the story of the binding of Isaac.

As the evening wore on people continued to weave in and out, some stopping by for a drink and to catch a bit of music, others just to check out the scene. Things wound down at around 11 p.m., which was high time for us to begin our trek back to Washington Heights, where we’d left our sleeping baby with the next-door-neighbor babysitter. It was a late night out for us first-time parents, and we still had a long subway ride home, but even as we braced ourselves for a 10 minute walk in the rain, sans umbrellas, to the subway station, we were glad we’d come. We felt pleasantly sated, slightly tipsy, and grateful for the revival of the speakeasy.