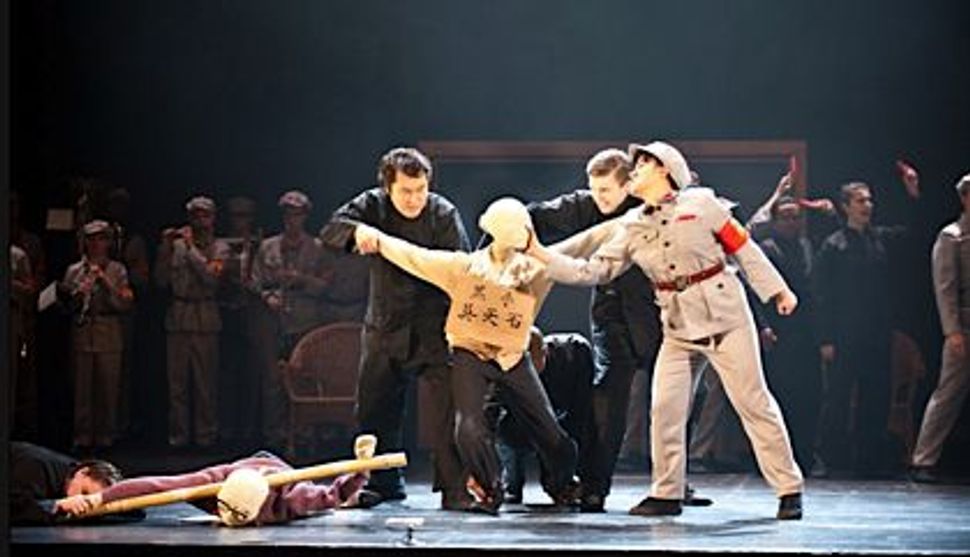 Topping my list of the best classical performances of 2011 was that rarest of things: a brilliant operatic rendering of real historic events that engaged the audience emotionally, morally and intellectually. Juilliard presented the American premiere of “Kommilitonen!” (“Fellow Students!”) composed by Peter Maxwell Davies. Librettist (and director) David Pountney braided together three different student protests: the anti-Nazi “White Rose” student movement in Munich, James Meredith’s forced enrollment at the University of Mississippi as its first black student, and the Cultural Revolution in China.

Remember the scene in the film “Casablanca” where the patrons sing the “Marseillaise” to outdo the German soldiers singing the “Wacht am Rhein”? Imagine that sort of confrontation going on for two acts, and you get an idea of the impact of this work. The Jewish element here — one student in wartime Munich recounting to the others his eyewitness account of the horrors of the Warsaw Ghetto — is barely a whisper, and all the more powerful for its understatement. (Since the Warsaw ghetto was in the middle of the city, trams had to go through with their doors locked. Pedestrians had to cross over specially built bridges going over it.)

The stated goal of the White Rose movement was to disseminate news about Nazi crimes so Germans couldn’t claim in the future they didn’t know — the title of the opera comes from the broadside they risked their lives to write and distribute. The capture and execution of these students is included in the piece. The music of the whole opera has a bracing urgency, without anything being particularly memorable. The drama continually confronts the audience, without being particularly provocative, hectoring, or even clear in its logic or details. Yet the combination had me fighting back tears through almost the entire performance. Masterfully conducted by Anne Manson, this is a piece that must be done again. Often.

“Neither,” the only “opera” ever written by composer Morton Feldman or author Samuel Beckett, is enigmatic, extreme, mystical and gorgeous. The New York City Opera presented its New York premiere as the triumphant high point of a program of three unrelated “mono-operas” in its unfortunately terminal Lincoln Center season. Soprano Cyndia Sieden nailed the impossible vocal solo, which consists of stabbing, isolated high notes, with a security that left one in awe of both her technique and of the music. (With other singers it has often sounded more like target practice.) The City Opera Orchestra played the rapt, richly colorful, slightly askew score so idiomatically it showed how much conductor George Manahan’s years developing the ensemble had paid off. (Sadly, he has resigned amid the ongoing turmoil at the institution, and the very existence of the orchestra is now in question.) The attitude-driven production was irrelevant, but the performance was amazing. Beckett’s “Neither,” without Feldman’s music, also made a reappearance in Peter Brook’s spare, moving, valedictory production of Beckett playlets at the Baryshnikov Arts Center.

I have rarely encountered such honest, subtle and authoritatively direct music making as conductor Kurt Masur’s New York Philharmonic performances of Shostakovich’s Symphony #13 on the poems of Yevgeny Yevtushenko, despite his increasingly obvious physical frailty and palsied movements. Masur knows in his bones what this music is about. From the opening “I am as old today / As all Jewish people” to the final poem, “A Career,” everything here had the gravity of history, which can only have come from his life experience. For once, this work about mass murder and complicity was performed with the victims’ humanity firmly fixed in mind. Replacing the irony and humor usually found in the score was a knowing sadness that was shocking in its forthrightness. The Shostakovich was all the more shattering by having been preceded by Masur’s unforced unfolding of Schubert’s “Unfinished” symphony with unearthly radiance.

David Robertson conducted the New York Philharmonic in Schoenberg’s “Erwartung” (“Expectation”). Did she stab her lover to death, or is she imagining a non-existent lover, is she crazy, or all of the above? Deborah Voigt sang this tour de force of expressionist miasma effectively, but the real revelation of the performance was the amazingly clarifying, colorful textures Robertson drew from the orchestra. It was such a hallucinogenic performance, after the enigmatic conclusion — time going backwards? A drowning? — one hardly knew where one was.

I had reservations about this production of Philip Glass’s “Satyagraha,” a pageant on Mohandas Gandhi’s life in South Africa using a text adapted from the Hindu scripture Bhagavad Gita (and sung in the original Sanskrit), when it was first mounted 2008, but it really soared the second time around. The opera is only distantly representative of its putative subject, but the work’s beauty, sweep and majesty is something to behold. Gandhi’s final aria on the force of righteousness — which vocally consists of 40 repetitions of an ascending Phrygian scale on E, broken only by the occasional and gradually slowing repetitions of a pensive string interlude — is one of the finest things Glass has ever composed, a perfect marriage of idea and his minimalist manner. This time around tenor Richard Croft managed to smooth over the register breaks in his voice and, abetted by the sure conducting of Dante Anzaloni and the Met’s incomparable (and — surprise! — enthusiastic) orchestra, effortlessly managed to instill a sense of calm determination and purpose. At the last performance, the composer (who is celebrating his 75th birthday with several works performed by such major institutions) joined an Occupy Wall Street protest on the street in front of Lincoln Center, and led them in three repetitions of the text of Gandhi’s final aria in English.

Classical Music Moment of the Year:

The chorus of Hebrew slaves, “Va pensiero” (“Fly my Thoughts on Golden Wings”), from Verdi’s opera “Nabucco” (Nebuchadnezzar) has become Italy’s unofficial national anthem. It is spontaneously sung at soccer games, and all sorts of other occasions.

The moment of the year came this past spring when conductor Ricardo Muti, in an almost unprecedented gesture, halted his performance of “Nabucco” at the Rome Opera after an audience member shouted “Viva L’Italia!” during the tumultuous standing ovation which followed the chorus. Completely breaking with tradition, Muti turned around and directly addressed the audience: “Yes, I am in accord with that ‘Viva L’Italia!’ When the chorus sang ‘Oh mia patria si bella e perduta!’ [“Oh, my country so beautiful and lost!:], I thought to myself that, if we slay the culture on which the history of Italy is founded, truly our country will be beautiful and lost.” He then conducted the audience in a repeat of the chorus (you can watch the video here) and there wasn’t a dry eye in the house. Finance minister Giulio Tremonti, who had instituted drastic cuts in the cultural budget, thus prompting Muti’s impromptu speech, had been quoted as saying, “You can’t eat culture.” Berlusconi’s government backed down in the face of this Rome opera sing-along. Muti is reported to have marveled that everyone in the audience knew all the words!