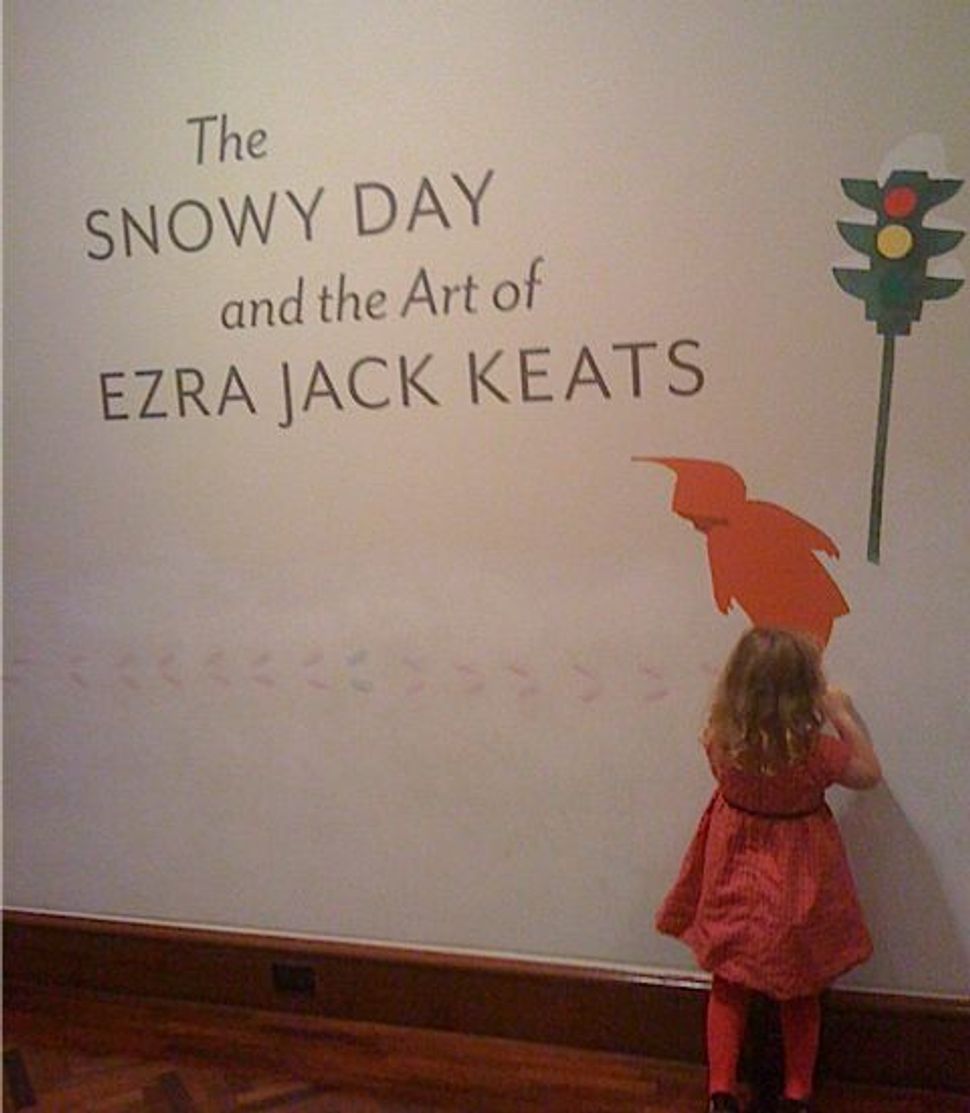 The best writers of children’s books appeal to readers of all ages. Sometimes this appeal comes from the same sources, sometimes from different aspects of the book. At their best, both Ezra Jack Keats (born Jacob Katz) and the show in his honor at the Jewish Museum, do both. Children will gravitate towards his narratives, adults will find his biographical context more compelling, while all visitors can enjoy the bright, but eclectic palette and the vividness of his painted scenes.

Best known for “The Snowy Day” (1962), Keats grew up poor in Brooklyn in a milieu so Jewish that Claudia Nahson, the curator, felt it worthwhile to note that he fondly remembered falling asleep to his father reading the Forward’s legendary advice column, The Bintel Brief, out loud. But though his own background was quintessentially Jewish, his work is stamped more distinctively by the urban surroundings that were his childhood context.

Because “The Snowy Day” was one of the first children’s books to feature an African-American child as a protagonist, Keats was seen as a civil rights trailblazer, but it seems as though he was more of a realist than an activist — portraying life as he had seen it, growing up in New York City. So, though genealogies can be traced to Jewish children’s book writers like Simms Taback, more importantly he made a place for books like Faith Ringgold’s “Tar Beach” — like “The Snowy Day” a Caldecott Award winner — whose 1991 portrayal of her dreaming on her family’s Harlem rooftop explores a contemporary urban world that looks both at, and beyond, the constraints of New York city life.

As they did to good effect in the Curious George exhibit, the Jewish Museum has set up a reading corner with a broad selection of books for kids to read. As with Margret and H.A. Rey, Keats was responsible for a much wider array of books than the well-known ones. These include the Louie series and follow-ups to “The Snowy Day” including “Peter’s Chair” (1967), where Peter, from “The Snowy Day” comes to terms with his baby sister, for whom his old baby furniture is being painted pink. The invitingly strewn beanbags give the younger reader a chance to get acquainted with the breadth of the oeuvre. Perhaps because Curious George has become such an engaging icon, the reading corner felt less inviting on this occasion — the everyman Peter not proving as inviting a character.

Curious George is a household name because the narrative is simple, the draftsmanship efficient. Keats is more complex, more elusive: his appeal is less simple. Putting her finger on it in her excellent catalogue essay, Nahson notes that Keats, who thought that he’d “always been in the background,” got a job at Captain Marvel comics as a “clean-up and background man.” This led to a career where, as Nahson puts it,

Keats not only made such backgrounds [of gritty urban landscapes] an integral part of his stories, but he also rendered the squalid city settings beautiful through his mastery of collage and his expressive painting.

Although committed to Keats’s excellence, Nahson only mildly overstates his virtuosity. The original prints used for the books and shown at the exhibition bear revisiting. Their variety and sensibility remind adult viewers — especially ones who spend time reading children’s books — of two important facts. First that experiencing aesthetic integrity is as formative for young children as a seductive narrative. And, second, that the sometimes trite overcompensation into diversity and inclusiveness of contemporary kids’ books is far preferable to the pre-1962 alternative. In my house Keats’s legacy can be measured in pink: my second child wanting to know why, if her older sibling loved her as much as Peter did his, her chair hadn’t been painted over.