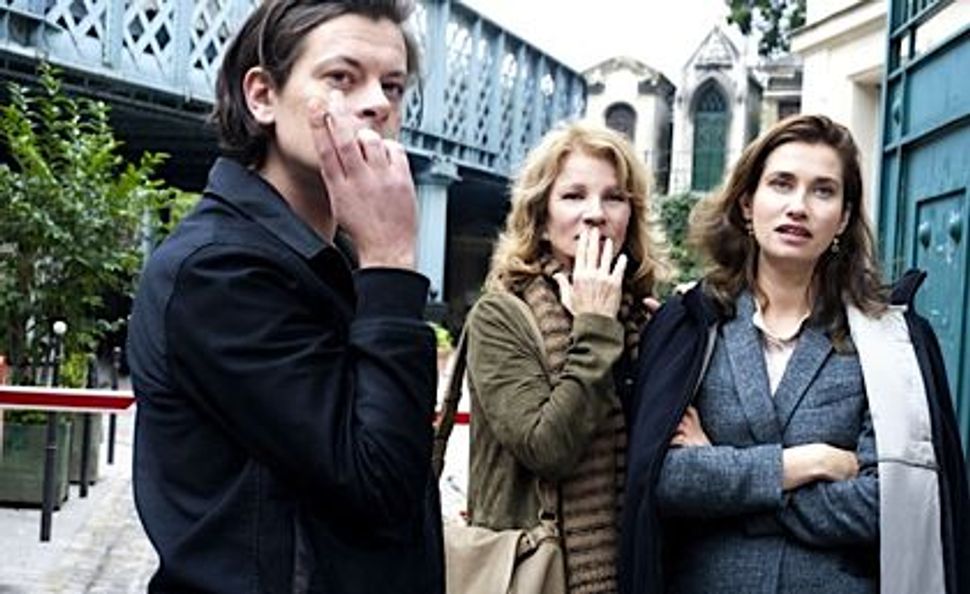 Even Chekhov thought he was writing comedies, but the bracing first feature by writer and director Katia Lewkowicz, “Bachelor Days Are Over,” billed as a comedy in the current New York Jewish Film Festival, would serve audience expectations better if it had been given an English title closer to its original French one: “Pourquoi tu pleures?” (“Why are you crying?“). The film is a rueful portrait of Arnaud (nicknamed Cui-Cui), a man-child passing several errant days before his wedding in a state of existential angst after he beds a gal he meets at his bachelor party night-on-the-town, and begins to question his choice of bride, Anna, who has done a short-lived disappearing act of her own.

In scenes that have the sweet-sour perfume of “The Hangover” mixed with Federico Fellini’s “I Vitelloni,” Cui-Cui goes drinking and carousing with his buddies, plans a reception with the input of his manic older sister, and roams aimlessly through his last free days. He meets his fiancee’s extended non-French speaking family, touches base with his needy yet still beautiful widowed mother, and deals with a real estate agent who interrupts his most recent sexcapade with an unscheduled visit. Then his apartment floods. The chaos of his daily life, familial demands, and memories of a father who first abandoned the family and then died, all send the sober (if not necessarily sensible) Arnaud into a state of paralysis.

The film’s Jewish milieu is expressed mostly through passing remarks and background flourishes. No one, for example, ever says the word “juif.” But in a preliminary series of talking heads, one of Cui-Cui’s buddies tells us that Arnaud’s mother is from Oran. Probably better understood by the film’s French audience, this statement clues us in to the fact that Arnaud descends from a Pied-Noir of the large Algerian port city that once had a substantial Jewish population.

This information prefigures a much later scene in which Arnaud and Anna are feted by her assorted uncles and friends. Here, Anna’s mother sings to the couple a tender ballad in Yiddish, and the rest of the crowd chimes in. Arnaud receives these attentions as if he’s about to shit a brick. The Jewish family is served up as soulful comfort food, but it’s comfort that brooks no resistance. Arnaud resists. His ambivalence is a reaction to smothering expectations. It is also a reaction to the flighty Anna after he has shtupped the captivating nightclub singer Léa.

With Arnaud at the center, Lewkowicz presents a remarkable series of portraits. Her deft cast is an easy ensemble, and the crude sexist humor is the more remarkable for having been created by Lewkowicz and co-writer Marcia Romano. Benjamin Biolay is perfect as the indecisive Arnaud, with rumpled good looks and a shaggy dog quality. Emmanuelle Devos as Arnaud’s sister conveys the fierceness of an overburdened mother and the tough love of a loyal sister. But if anyone steals the film, it’s the veteran actress Nicole Garcia afs Arnaud’s sexy mother. Lithe and blonde, she is a daffy delight, a force of nature, and a self-pitying glamour puss who adores her son and is enraptured that at 35 he is finally about to take the plunge. At one point, she forces him to lunch with a group of her middle-aged friends, as if he is a shiny trophy for them to stroke. Arnaud, poor sap, stays long enough to satisfy their longings.

“Bachelor Days Are Over” is an assured debut, a buddy movie written by women which also gives its women characters their due. You only need to love the French at their most messy to appreciate its main character, a man who must choose between love at its least rational and love at its most domesticated. The film may not be much of a thigh-slapper, but it is a kick in the pants.

Watch the trailer for ‘Bachelor Days Are Over’: