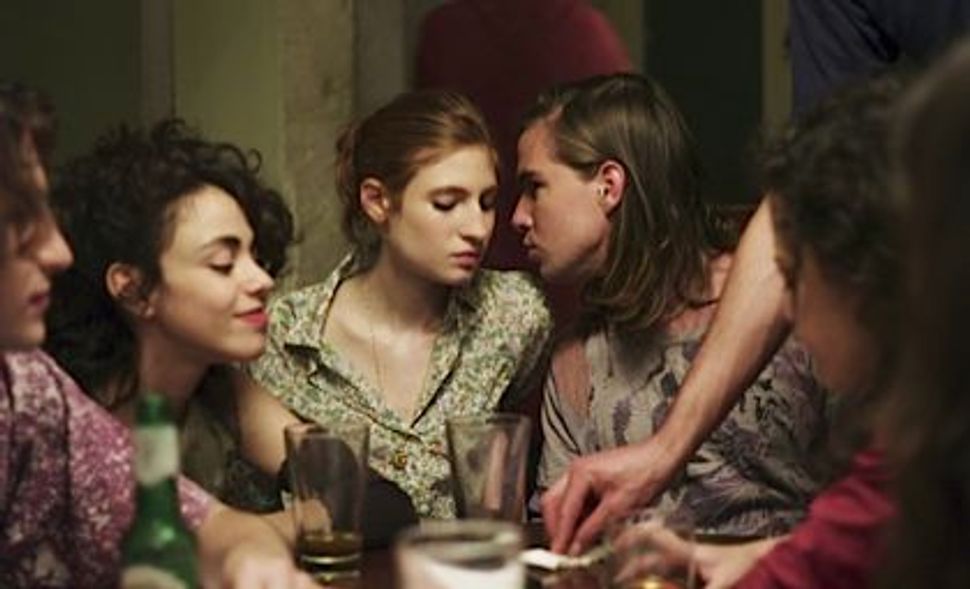 I imagine a movie that is even-handed about the Israeli-Palestinian conflict will enrage people at the extremes. If so, the French produced film “A Bottle in the Gaza Sea,” screening January 22 and 23 at the New York Jewish Film Festival, could create a battle royale among American Jews, even though its provocations are measured.

With its tight structure and frequent use of voiceover, it’s not surprising that the film is adapted from a literary source. But I would not have guessed that author Valerie Zanetti — who also co-wrote the film script with director Thierry Binisti — intended her original novel as a work of young adult fiction. While its main characters — an Israeli teenager of French origin named Tal and a young Gazan named Naim — come perilously close to stock figures, they gain in complexity as their predicaments with family, friends and social environments gather texture and nuance. Yet the story never descends into a predictable tale of love across boundaries of ethnicity, religion and class. Rather, it builds as an epistolary friendship set within a political context.

Epistolary, in this case, is maybe too old-fashioned a term for a digital exchange that commences when Tal’s brother, Eytan, who is serving in the Israeli army in Gaza before the 2005 withdrawal, throws a bottle into the Mediterranean Sea at her behest. In it, she sends out a handwritten letter hoping its recipient will explain to her why a young Israeli girl roughly her age had to die in a terrorist bombing shortly before her planned wedding.

Naim, a disaffected Gazan youth whose intelligence is thwarted by the lack of educational opportunities, takes up the challenge of communicating with the anonymous Israeli girl via email, hiding his activity from family and friends. Tal’s musings and questions, in English, are premised on what some may perceive as a naïve desire for a pacific resolution to the conflict. Naim, slightly older and hardened by experience, responds as “Gazaman,” and seeks to upset Tal’s callow frame of reference — liberal, humanist, Western, privileged.

The story cuts between Tal’s middle class life in Jerusalem and Naim’s circumscribed one in occupied Gaza. Tal, 17 and on the threshold of sexual maturity, is, like Zanetti, a French émigré whose warm, observant family has settled in Israel, where the presence of terror bombings loosens her internal bearings. Both curious and courageous, she wants to get at the human source of political violence threatening her adopted homeland.

Naim, living with a worldly widowed mother who is also a professional at the local hospital, is himself stuck in a dead-end job provided by his uncle Ahmed. This gives him a bit of spending money and the camaraderie of his comically dexterous cousin who is soon to marry. But Naim is avoiding his own frustrations, and the chance to rage at an anonymous and uncomprehending “enemy” soon has him engaged in a deepening inquiry into his own future.

As Tal and Naim move from stilted English to French, a language Naim has learned and loves, he finds comfort going to the local French Cultural Center to improve his skills and enhance his prospects. Now his email correspondence in French gives him a fresh incentive. The two young people, although at first wary, communicate their separate fears and disappointments.

“A Bottle in the Gaza Sea” does not aim to resolve larger political conundrums, yet it tries to show how the facts on the ground — in this case, the Israeli withdrawal from Gaza followed by Hamas’s shelling of southern Israel and the Israeli military’s responding airstrikes — can force well-meaning people into political postures, even as they work hard to move beyond them.

Director Binisti is lucky in his casting, especially with Agathe Bonitzer as Tal, Mahmud Shalaby as Naim, and Hiam Abbass as Naim’s mother. Binisti’s camera captures evocative details of everyday life in both Israel and Gaza, and the lives lived under psychological or military siege. His and Zenatti’s screenplay, undoubtedly close to its source material, may be balanced, but it avoids being empty and pat. Each side argues for its own justice, yet each must share some responsibility.

If you are not yet so cynical that you can’t accept that possibility, “A Bottle in the Gaza Sea” will perhaps provide a shred of hope for something that usually receives mere lip service: our common humanity.