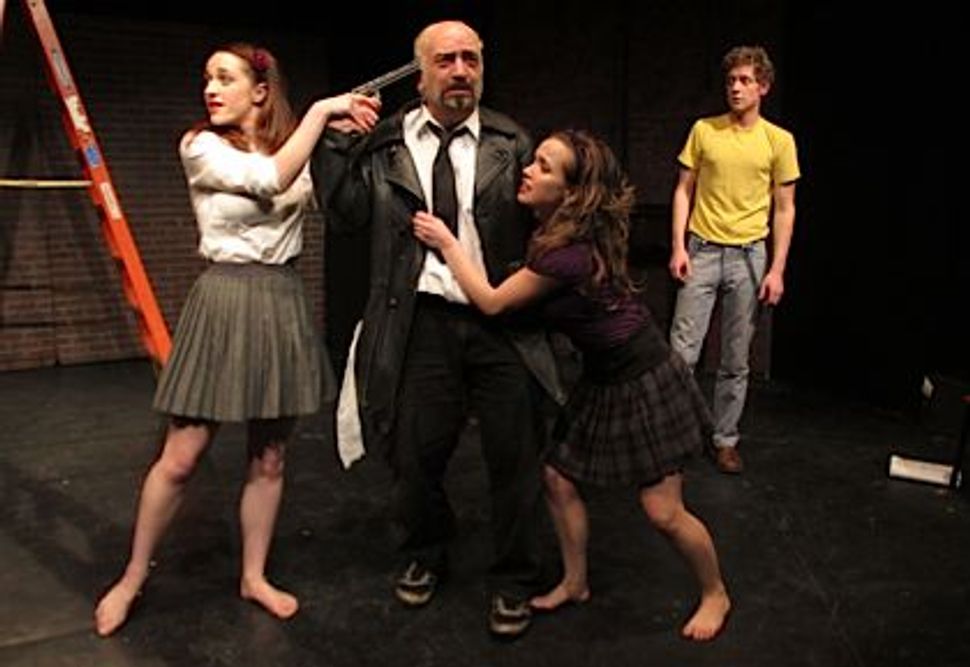 At least “Open Rehearsal” gives warning. The audience is told point blank in the program that the “acts and scenes occur out of sequence.” It is clear from the moment the lights go down that this will not be a linear theatrical experience.

Playwright and director Lazarre Seymour Simckes is no stranger to the absurd. His previous works, “Nossig’s Antics” and “Seven Days of Mourning,” sought to showcase the absurdist elements of the Jewish experience. But in “Open Rehearsal,” playing at Theater for the New City until February 5, the focus is on family, not faith. At least, that’s what I think it was about.

The play is a mash-up of broad comedy, intense melodrama, repeated jokes and theatrical contrivances. There are gunshots and ghosts, an engagement, a dance number and multiple hospital scenes. We are watching a disjointed rehearsal of a play within a play. The characters may be related in life, or maybe just on stage. If this sounds hard to follow, I assure you that it is.

Simckes claims his piece is “a Pirandellian family farce in which tragedy and comedy shove each other around for the right to be on stage.” The core problem, however, is that the show is neither particularly tragic nor particularly comic. It is confusing to the point that it becomes meaningless. Instead of highlighting the absurd, darkly funny way that tragedy and comedy coexist in life, the tangential, hackneyed jokes become frustrating and the unintelligible structure becomes maddening to decode.

The company of actors, all of whom are fiercely committed to this nonsensical story, end up overdoing each line with gestures and voice modulations. It’s never clear if they are acting as part of the “play” or not, and each scene becomes a loud, emotional frenzy.

Simckes gives many explanations about what this play is, at its core — a screwball comedy, a Greek tragedy, a form of therapy and more — but it never quite reaches that level of impact. Instead, it leaves you feeling stressed and confused.

What seems to be missing here is the realization that family life is absurd in its own way; there is no need to place an assumed theatrical construct around a group of related people to highlight their insanity. The understudies, the replacements, the director are all unnecessary. Tell the story of family and the absurdity will come, and it will be loud and frenzied and emotional and gripping. A real, honest, ugly mess of relations — that is a performance that needs no rehearsal.