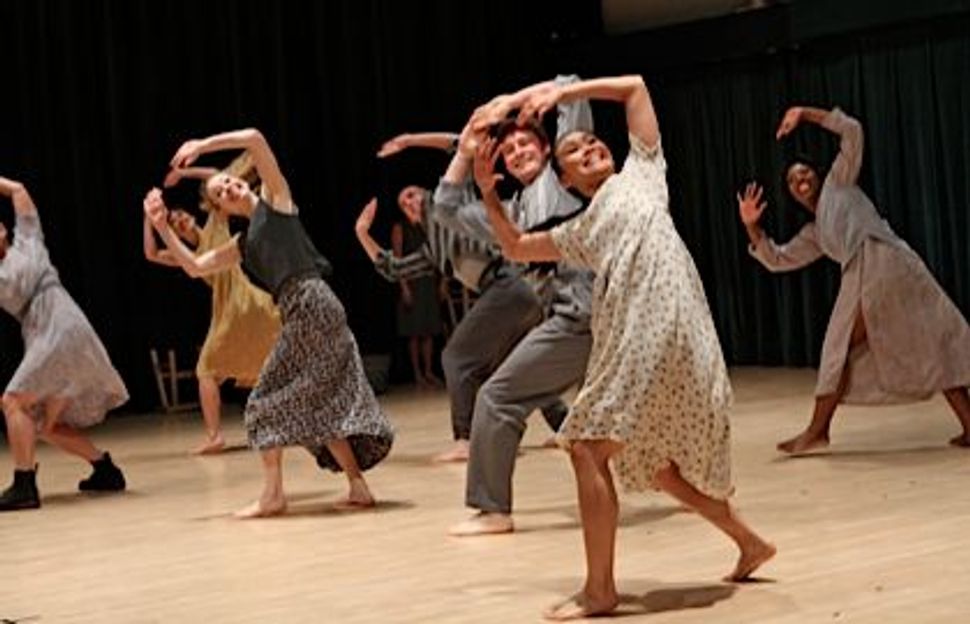 “I am a child of survivors, so I think about the Holocaust every day,” said Carolyn Dorfman at the recent “In the Spirit of Terezín Artists” dance showcase at the 92nd Street Y. “My family’s trauma and triumph comes out in my dances. It is impossible to escape it.”

Dorfman’s “Cat’s Cradle” was one of seven pieces presented in the program on January 20, commemorating the artists of the Terezín concentration camp. The performance was part of a five-week series, “Will to Create, Will to Live: The Culture of Terezín,” which continues through February 16.

Devised by the Nazis in 1941 to hold Jews from occupied Bohemia before their deportation to Auschwitz, the Terezín camp held a large number of visual artists, musicians and poets whose creations endured after the war. The performance consisted of original choreography by Dorfman, Dana Boll, Aviva Geismar and Laura Shapiro, and two works by the famed Anna Sokolow restaged by Samantha Geracht Meyers and Ze’eva Cohen. These pieces honored the legacy of Terezín, exploring themes of struggle and survival.

Dorfman and Boll presented pieces that delve into the concentration camp experience. Dorfman set “Cat’s Cradle” to the music of Bente Kahan who composed songs adapted from the poetry written in the Terezín ghetto. In shabby work clothes, her eight dancers moved seamlessly, portraying women and children imprisoned yet forced to perform in a cabaret. Boll’s piece, “Bella’s Dream,” was inspired by the story of her grandparents’ escape from Poland. The five performers incorporated text with choreography to re-create their journey from the camps through Uzbekistan to the United States.

Shapiro and Geismar choreographed solo works. Shapiro performed an excerpt from her dance-theater piece “Letter from Poland,” inspired by a note sent to her grandmother in 1937 from an unknown relative. An array of suitcases, bags, hats and maps heighten Shapiro’s sense of wandering and displacement as she contemplates the fate of this mysterious family member. Geismar, whose dynamic gestures are reminiscent of German expressionist Mary Wigman, exhibited incredible dramatic range playing both the part of a prosecutor and a defendant in “The Unbidden and Unhinged.” She presented a second solo “Yelena,” danced by Donna Costello, which investigated inner struggles of the female protagonist in Chekov’s play “Uncle Vanya.”

Cohen and Geracht Meyer’s re-staging of Anna Sokolow’s choreography was particularly stunning, and the works, both over 30 years old, had timeless appeal. Mariah Steele danced an effortless rendition of “Dreaming,” a piece choreographed for Cohen in 1975. The Sokolow Theater/Dance Ensemble closed the show with “The Unanswered Question,” the powerful study of mental breakdown. The large cast featured dancers of all ages, who commanded the stage with Sokolow’s meditative movement style.

As the six choreographers spoke with the audience at the end of the show, they represented not only the legacy of the Terezín artists but also that of Jewish choreographers in New York. When asked about her choice of artists for the show, Catherine Tharin, the curator of the program said, “All of these artists had a connection to Terezín, but also to each other. They represent a whole generation of dance.”